In late June, Mars Hill Church admitted that leaders took money designated for the church’s Global Fund and funneled those donations into their General Fund. On July 1, the church’s website disclosed that “the preponderance of expenses” were allocated to “church plants and replants in the U.S.” as opposed to mission efforts in India and Ethiopia. The church plants were Mars Hill Church branches  in the United States.
Then in their July 11 newsletter, Mars Hill briefly addressed a petition at Change.org requesting an accounting of the amount of money spent on missions and the amount spent toward expansion of Mars Hill Church in the U.S. In that newsletter, they also claimed that letters were sent to 6,000 Global Fund donors offering them the opportunity to direct (again) their donations to missions work outside the U.S. While this may be true, not all Global Fund donors received this letter.
Recently, a Mars Hill member (I will call him John since he doesn’t want his identity revealed) contacted me to say he did not get a letter from Mars Hill about his donations to the Global Fund. He also provided a page of his online giving records to me. You can see a portion below with his name redacted. 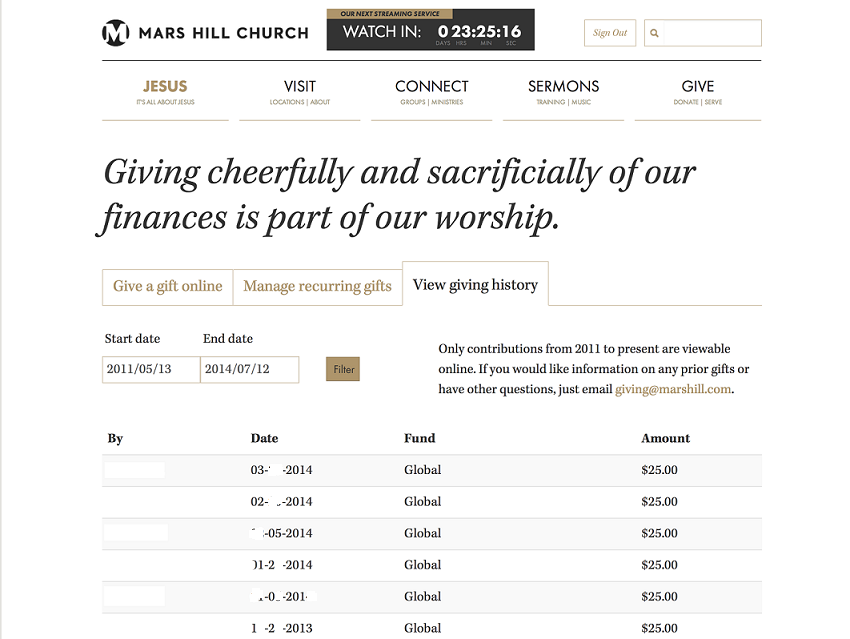 While Mars Hill has now admitted that the Global Fund existed and was separate from the General Fund, this record provides additional evidence that members could designate their donations to the Global Fund. This evidence is in contrast to the following statement on the Mars Hill Global FAQ page:

Since 2009, we have used the term “Global” to help us distinguish between donors who attend our churches and donors around the world who follow us online.

That is only partly accurate. Indeed, on the Mars Hill giving website, donors are asked to designate whether or not they attend a Mars Hill church or not. Those who don’t attend a Mars Hill church are supposed to designate “global” as a location. However, until May of this year, donors could also designate a fund for their contribution. They could give to the General Fund, the Global Fund, or a Foundation designed to support church plants. Members and non-members alike could designate money to the Global Fund. The person above is a member of Mars Hill and designated his donations to the Global Fund.
See this video for a demonstration of how the website worked prior to the changes done in May.
[youtube]https://www.youtube.com/watch?v=a4EFX3-RXyg[/youtube]
It should be a simple matter for Mars Hill Church accountants to run a report showing the amount given by non-members and members to the Global Fund and the General Fund. Likewise, a report could be generated to show where the Global Fund money was spent. However, despite the petition and the many requests for this information, Mars Hill has not provided it.
I asked John where he thought his money was being spent. He said, “It seemed pretty clear to me that the money was going to help out Pastors in Ethiopia as they received resources, training, and monetary assistance to plant churches abroad.” He added, “I had no reason to not believe it was going there until recent issues and events have come to light.”
I asked him what prompted him to donate to the Global Fund and he told me that the videos shown each Sunday before Mark Driscoll preached (e.g., this one) “were the most compelling part” of his decision to donate to the Global Fund.  I asked John’s reaction to finding out that all of his donated money was not going to mission efforts. He said he had been eager to give time and money to Mars Hill, but now he said, “I no longer trust that Mars Hill will steward my tithes or others well and have begun giving my tithes to other church plants and missionaries.”  He added, “There is no reason to hide from this unless they have either forgotten or choose to ignore the truth and freedom that comes from the Gospel of Jesus.”
John plans to discuss how to redirect or have his donations returned with his pastors in the near future.