Those in charge of Mars Hill Global seem to agree with me that Mars Hill Global is really Mars Hill Church.
Last week, I posted a 2011 document about the rebranding of Mars Hill Global (among other things, “cultivate an international audience and giving base”) and a slide showing the dramatic rise in giving on behalf of the MH Global brand. After those posts appeared, a sentence was added to the website description of MH Global:

The May 15 Google snapshot of the page looks like this:

The current page adds a sentence at the beginning: 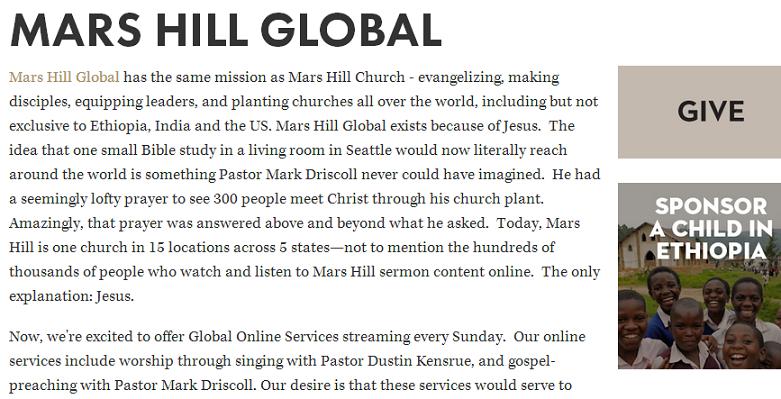 My guess is that the sentence is designed to slightly better inform potential donors (remember the purpose of MH Global – “cultivate an international audience and giving base”) that the money they give to Mars Hill Global may not go to Ethiopia or India but to the general fund of Mars Hill Church.
Given the pictures of Ethiopian churches and children, some donors might think that their money was going to Ethiopia. However, according to current and former Mars Hill sources, that is not necessarily the case. This new disclosure hints that my sources are on target.
In the Mars Hill 2013 Public Disclosure package, there is no mention of Mars Hill Global, Ethiopia, India, etc., and only one mention of a mission fund:

In October 2012 alone, nearly $150,000 came in to the Mars Hill Global brand. From July, 2012 to June, 2013, nearly $2.3 million was given to Mars Hill Global. However, in available reports (the 2013 Annual Report and Public Disclosure package), where the Mars Hill Global money was disbursed is not reported.
What would be nice is Mars Hill leadership would simply indicate on the website how much money is given on behalf of Mars Hill Global and then where that money goes.  In fact it would be more than nice, it would satisfy the guidelines of the Evangelical Council for Financial Accountability.  The guidance is clear that reporting should make it clear where money is spent. According to the ECFA:

Historical practices of faith missions and other charities has conditioned donors to give for specific purposes and to expect their funds to be used for those stated purposes and not for the organization’s general use. Such practices include raising funds to support specific projects or programs as well as the ministry of specific workers. Fundraisers acknowledge that specific use appeals are more effective than general appeals.

Currently, I cannot find such an accounting. Last Thursday, I wrote giving@marshill.com and asked if donations to Mars Hill Global go to missions or the Mars Hill general fund. Perhaps some accounting exists and the folks at giving@marshill.com will let me know this week, although it is possible that the sentence added above indirectly addresses the matter.