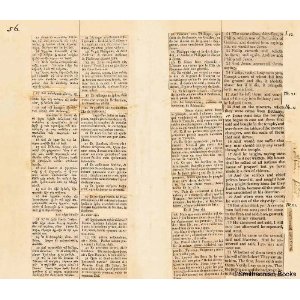 You can’t see the words well but Jefferson cut out the portions of the New Testament he wanted to include in Greek, French, Latin and English. Verses are arranged so that the reader can see how they are translated in each language.

I am interested in the Jefferson Bible because it gives some insight into what Jefferson believed about Jesus. Also, I wanted to inspect the manuscript more closely to address the false claims of David Barton about the Jefferson Bible. In his American Heritage DVD series, Barton said this about Jefferson’s efforts:

What happens is, this little document here is called the Jefferson Bible. We call this the Jefferson Bible and the last 30 years, people have consistently said this is the Scriptures that Jefferson cut out everything with which he disagreed. Well if you go to the front of this work, it doesn’t have the title Jefferson Bible. If you’d used that title with him, he’d have probably punched you out for saying it. The title he gave it is the Life and Morals of Jesus of Nazareth. What he did was he went through and cut out all the red letters of Jesus and pasted them from end to end so he could read the red letters of Jesus without stopping. He’s not what he cut out but what he put in. But why did he do that?

He tells us, he did this twice, he did this in 1804 and he did it again in 1819. He said that he did this to be a missionary tool to evangelize the Indians. Because if we can get them to read the life and teachings of Jesus of Nazareth, it’ll changed their lives. So this was not a work that he turned and cut out everything he disagreed with. It’s a work where he took all the words of Jesus and put them there so you could read the words of Jesus non-stop.

I addressed this claim first in January, and want to expand on that post here. About Jefferson’s effort, Barton said:

and then, he added:

Barton’s claim that Jefferson “cut out all the red letters of Jesus and pasted them end to end so he could read the red letters of Jesus without stopping” is provably false. There are many red letters which Jefferson omitted. Jefferson wrote in the margin of his work the references to the passages he snipped from the manuscripts. Reviewing my edition, I did not find any references to Jesus’ words in John 14-17. Jefferson included lengthy passages from Mt. 5, and Luke 12 but omitted the lengthy sermons in red letters in the chapters 14-17 of John (see John 14-17 in this online red letter edition of the New Testament). Most of the words in this section of John are words of Jesus. Jefferson omitted them.

Jefferson may have done so because in these passages Jesus speaks of Himself as deity. For instance, in John 14:1-4, Jesus says He is going to prepare a place in heaven and calls God His Father:

And then John 17: 1-3 proved unreliable as an actual teaching of Jesus to Jefferson:

17:1-3 – When Jesus had said these words, he raised his eyes to Heaven and said, “Father, the hour has come. Glorify your Son now so that he may bring glory to you, for you have given him authority over all men to give eternal life for all that you have given to him. And this is eternal life, to know you, the only true God, and him whom you have sent – Jesus Christ.

Given that Jefferson left out long passages of the words of Jesus, it is clear that David Barton is misleading his audiences when he says Jefferson’s book of teachings of Jesus is all the red letters laid out in order. And when one examines what Jefferson left out (what he considered a “dunghill” from which he extracted “diamonds”), it seems clear that Jefferson believed these passages were not original with Jesus. He told John Adams that his work represented the collection of the real teachings of Jesus, saying:

In extracting the pure principles which he [Jesus] taught, we should have to strip off the artificial vestments in which they have been muffled by priests, who have travestied them into various forms, as instruments of riches and power to themselves. We must dismiss the Platonists and Plotinists, the Stagyrites and Gamalielites, the Eclectics, the Gnostics and Scholastics, their essences and emanations, their logos and demiurgos, aeons and daemons, male and female, with a long train of … or, shall I say at once, of nonsense. We must reduce our volume to the simple evangelists, select, even from them, the very words only of Jesus, paring off the amphibologisms into which they have been led, by forgetting often, or not understanding, what had fallen from him, by giving their own misconceptions as his dicta, and expressing unintelligibly for others what they had not understood themselves. There will be found remaining the most sublime and benevolent code of morals which has ever been offered to man. I have performed this operation for my own use, by cutting verse by verse out of the printed book, and arranging the matter which is evidently his, and which is as easily distinguishable as diamonds in a dunghill. The result is an octavo of forty-six pages, of pure and unsophisticated doctrines, such as were professed and acted on by the unlettered Apostles, the Apostolic Fathers, and the Christians of the first century.

If you are interested in seeing for yourself how Jefferson edited the New Testament, I recommend the little manuscript. It is a fascinating piece of history, but it is nowhere near what David Barton says it is.