In his American Heritage series, David Barton  told Matthew and Laurie Crouch that the Jefferson Bible was Thomas Jefferson’s attempt to construct a Bible to evangelize the Indians. He said that Jefferson put together the “red letters” or the words of Christ (often written in red in King James Bibles) for this Bible so he could get across the moral teachings of Jesus. Listen to Barton’s claims in this video:

Regarding Jefferson and his edited Bible, Barton said:

I have to stop on Jefferson for just a minute because when you say the Jefferson Bible, people say, I’ve heard of the Jefferson Bible, that’s where he cut out everything he disagreed with. He was so anti-Christian, so anti-Bible that he cut it all out. Well, temporary time-out; if he’s so opposed to the Bible, why is he one of the founders of a society that promotes the entire Bible? I mean if the Jefferson Bible charge is right, that he cut out the parts with which he disagreed, then why would he fund and contribute and help run a society that gives out all the Scriptures unedited. That’s inconsistent.

What happens is, this little document here is called the Jefferson Bible. We call this the Jefferson Bible and the last 30 years, people have consistently said this is the Scriptures that Jefferson cut out everything with which he disagreed. Well if you go to the front of this work, it doesn’t have the title Jefferson Bible. If you’d used that title with him, he’d have probably punched you out for saying it. The title he gave it is the Life and Morals of Jesus of Nazareth. What he did was he went through and cut out all the red letters of Jesus and pasted them from end to end so he could read the red letters of Jesus without stopping. He’s not what he cut out but what he put in. But why did he do that?

He tells us, he did this twice, he did this in 1804 and he did it again in 1819. He said that he did this to be a missionary tool to evangelize the Indians. Because if we can get them to read the life and teachings of Jesus of Nazareth, it’ll changed their lives. So this was not a work that he turned and cut out everything he disagreed with. It’s a work where he took all the words of Jesus and put them there so you could read the words of Jesus non-stop.

In April, 2011, I addressed Barton’s claim that the Jefferson Bible was an evangelism tool (it wasn’t) and yesterday I examined the claim that Jefferson founded the Bible Society of Virginia (he didn’t).

Today, I want to show that Jefferson did not include all the words of Jesus and that he did cut out miraculous elements, presumably because he disagreed with them. Indeed, he told John Adams in 1813:

We must reduce our volume to the simple evangelists, select, even from them, the very words only of Jesus, paring off the amphibologisms into which they have been led, by forgetting often, or not understanding, what had fallen from him, by giving their own misconceptions as his dicta, and expressing unintelligibly for others what they had not understood themselves. There will be found remaining the most sublime and benevolent code of morals which has ever been offered to man. I have performed this operation for my own use, by cutting verse by verse out of the printed book, and arranging the matter which is evidently his, and which is as easily distinguishable as diamonds in a dunghill.

So Jefferson included the words of Jesus but not all of them because some, he asserted, included the disciples’ “misconceptions as his [Jesus’] dicta.” Just for example, let’s look at a selection from Chapter one of Jefferson’s version. Here is an image from Jefferson’s manuscript. As you can see, this portion combines parts of Matthew 12, and Mark 2. As I will demonstrate, Jefferson omitted many words of Christ and the miracles He performed. 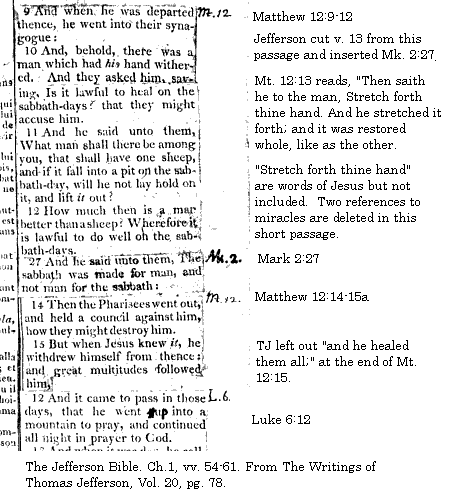 10And, behold, there was a man which had his hand withered. And they asked him, saying, Is it lawful to heal on the sabbath days? that they might accuse him.

11And he said unto them, What man shall there be among you, that shall have one sheep, and if it fall into a pit on the sabbath day, will he not lay hold on it, and lift it out?

12How much then is a man better than a sheep? Wherefore it is lawful to do well on the sabbath days.

13Then saith he to the man, Stretch forth thine hand. And he stretched it forth; and it was restored whole, like as the other.

14Then the Pharisees went out, and held a council against him, how they might destroy him.

15But when Jesus knew it, he withdrew himself from thence: and great multitudes followed him, and he healed them all;

In reading through the Jefferson Bible, many words of Jesus are missing (e.g., Jn 14:6 – “I am the way, the truth, and the life: no man cometh unto the Father, but by me“, Mt 28:19 – “Go ye therefore, and teach all nations, baptizing them in the name of the Father, and of the Son, and of the Holy Ghost.“). In fact, there are no post resurrection words of Jesus because Jefferson ended his Bible with the end of Mt 27:60 – “…and he rolled a great stone to the door of the sepulchre, and departed.”

If a modern day President chopped up the New Testament in the way Thomas Jefferson did, that President would be excoriated by Christian leaders. Examining Jefferson’s work, it is clear that the Jefferson Bible is not as Barton described.