Escalating their war on homosexuality, Uganda’s Rolling Stone is blaming the Kampala bombings on gays, as well as making up links to terrorist Joseph Kony in the North. The following images are from the November 15-22 issue out now. 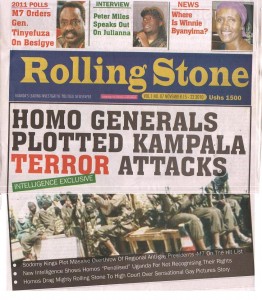 Click on the image on the right to read the Rolling Stone’s claims. As you will 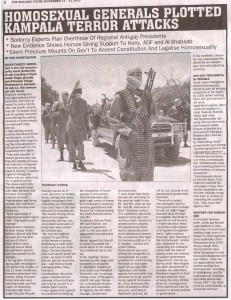 see, no sources are offered, no proof is provided. Perhaps in a nod to the recent court ruling in Uganda, the editors said that none of the bombings were carried out by people named in previous issues. That might be the only accruate statement in the entire article. However, a variety of terroristic activities are blamed on gays without any evidence whatsoever.

The article has no author and cites unnamed sources, but claims that the July attacks in Kampala during the World Cup were plotted by “deadly homosexuals living abroad.” The article claims homosexuals are angry that the government won’t respect their rights. The article claims without awareness of the contradiction that the government sent troops to Somali to cover the real story. The tale gets taller when the paper claims that homosexuals from the Middle East paid Somali terror group Al-Shabaab to bomb Kampala due to outrage over the Anti-Homosexuality Bill. Finally, gays are blamed for funding the Lord’s Resistance Army who have committed atrocities in the North.

This is another disturbing development in a series of such happenings. I will have more to say about this Monday, but I spoke yesterday with the mover of the Anti-Homosexuality Bill, Hon. David Bahati, and he confirmed to me that he expects the bill to be considered during the lifetime of this parliamentary session. It seems likely that the Rolling Stone’s campaign is designed to increase pressure on the Museveni government, facing a surprisingly strong opposition heading into upcoming elections, to move the Anti-Homosexuality Bill toward passage (e.g., read the Rolling Stone’s editorial).

UPDATE: Boxturtlebulletin also has these images as well as images of one of the other tabloid focused on gays, The Onion. BTB provides one article acknowing that Martin Ssempa has lost support over his support of the AHB.