On March 11, Martin Ssempa was a guest on Michael Brown’s radio show, Line of Fire. I was invited to join in but I was teaching at the time the show aired. The program is online here. Brown said several times that he invited critics of the bill to come on the show or call in. No one else who has criticized the bill could or would go on so the entire program consisted of Ssempa telling his side of the issue.

Ssempa began by saying that homosexuality violated nature, Uganda’s cultural norms, the religions in Uganda, and the laws in Uganda. He said homosexuality violated the laws and customs of the Buganda kingdom and other tribal kingdoms going back hundreds of years. But then apparently without sensing the contradiction, he said that the Ugandans revere Catholic martyrs who were killed because they rejected the homosexual advances of Mwanga, a Bugandan king in 1886.  The martyrs were Mwanga’s pages who had converted to Christianity due to the work of European missionaries. King Mwanga was enraged that Christianity forbid the pages from honoring his decrees and had many of them killed. Thus, at that time, homosexual relations, at least with the king, were not forbidden, nor brought in by outsiders. Due to the efforts of the mission work, Uganda eventually embraced Christianity. For this reason, now homosexuality does violate the dominate religion (as well as the minority religion, Islam) and was encoded into law due to the role of the British colonizers.

When Brown asked Ssempa why the law was needed since homosexuality is currently a criminal offense in Uganda, Ssempa mentioned four issues he wanted to see the law address. First, he believes the UN resolution on decriminalization of homosexuality is a threat and so Ugandan law needs to forbid the government from ratifying any such resolution. Second, currently promotion of homosexuality is not criminalized and he believes it should be. Third, lesbianism is not covered in current statute and fourth, boys need to be protected from defilement in the same way girls are. On the last point, he acknowledged for the first time I am aware of that current Ugandan law already covers defilement of boys (see this post).

However, Ssempa’s discussion of the 2007 law which included boys in the defilement section of the penal code was confusing. He said to me in November, 2009 on British radio that Ugandan law did not cover boys, when in fact it did at the time he made that statement. On Brown’s show, he did not apologize for misleading people for months, but rather made it seem as though the law was just recently altered to cover boys.

He added that the Anti-Homosexuality Bill may need to be changed to make it clear that it only intends to punish rape and child abuse. However, then he said critics had misrepresented the bill. Just when I thought he was acknowledging that the bill was written in such a way that anyone reading it would see the harshness of it, he then said the bill was being misrepresented.

Regarding Ssempa’s reasons for the bill, I must say that the bill does more than prevent ratification of resolutions, and curtail free speech. Ssempa denied during the show that he wanted the law to bother consenting adults, however, consenting behavior is also criminalized by this bill. Ssempa denied wanting to fuel flames of a witch hunt against gays. However, he has collaborated with Islamic clerics who offered to form squads to round up homosexuals. No words of discouragement to this activity from Ssempa are recorded anywhere.

During the show, just after Ssempa said the bill was on the Parliament’s website, he added that the Parliament did not want the bill “to be taken out because it gets re-edited.” Then Dr. Brown pressed him and asked him why he did not post the bill on his own websites, to which Ssempa replied, “Unfortunately, we’ve not had Internet access until about two weeks ago…” He then goes on to plug his blog which he says has just come online.

I heard this notion that the Parliament does not the bill “taken out” first from Fred Hartley, President of the College of Prayer. Hartley told me that David Bahati told him back in October, 2009 that the bill could not be sent via email because the Parliament did not want the bill edited. However, by that time, Martin Ssempa had already sent a copy of the bill to me via the Internet. Also, by that time, the bill had been publicly printed in the Uganda Gazette which is the official publication for bills.

Regarding Internet access, I am aware that it can be spotty in Uganda. However, Ssempa has had access, as have others in Uganda with whom I am in regular contact, continuously throughout the last year. Ssempa had sufficient contact to post his statement to Rick Warren on his main website, and his video response to him on YouTube. He was able to remove all references to abstinence group, Wait Training, within two days of the request being made. His blog has been online since 2007.

About the bill, Ssempa promised, “I will be happy to draw it from the Parliament website and link it to my blog.” That was March 10 and he has not done so as of today. However, you don’t need to wait, you can read the Uganda Gazette copy here, and a pdf version here. 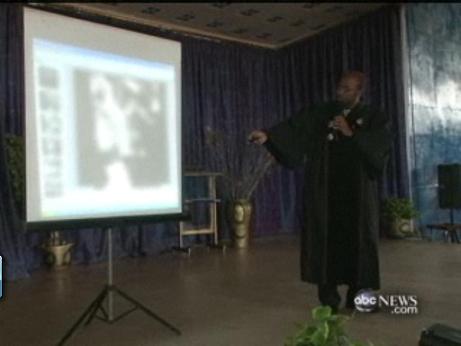 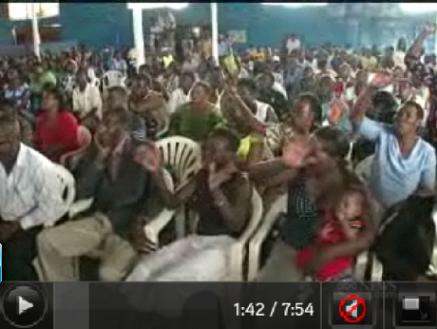 Judge for yourself if you believe Ssempa was answering candidly. His answer regarding why he did not show/shock his audiences with heterosexual S&M was irrelevant. To my knowledge, no law has been proposed there which would outlaw the acts depicted if done by an opposite sex couple.

Dr. Brown seemed to think that there were some important clarifications in the broadcast. Color me unimpressed. I did hear Ssempa admit that the “boy child” is currently covered in Ugandan law, but then he said the law was written for that purpose. I heard him say he does not think the bill should not cover HIV people for simply having sex, nor should it start a witch hunt. He thinks the penalties should be reduced. However, even these admissions were somewhat vague and rendered confusing by his other statements about the need for Parliament to see gay porn to know what goes on in private. If this behavior is not to be targeted then why is he showing it?

He failed to express any regret for misleading people for months. He misled listeners by saying the Parliament has a copy of the bill on the website. He said he would post the bill. He said the bill might need some changes but blames critics of the bill for misleading people. In light of these issues, I was not persuaded by his appearance and continue to advise opposition to the bill.