This ad was in Uganda’s Monitor on Sunday: 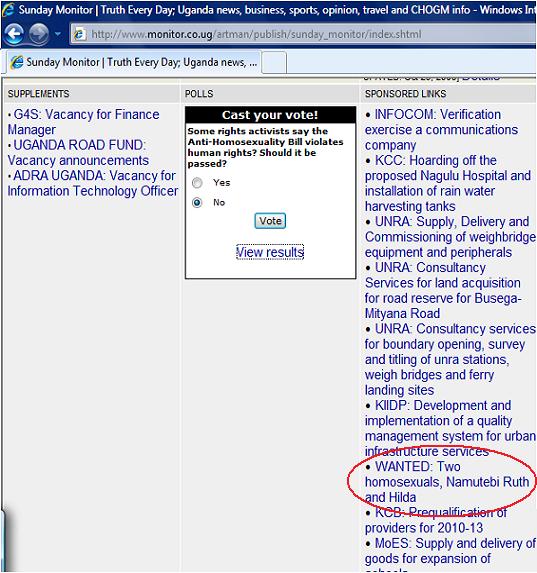 Note the ad in the red oval. When the link is clicked it goes to this ad:

Two homosexuals, Namutebi Ruth and Hilda are wanted by the police, anyone who sees them and has information leading to their arrest should report to the nearest police station for the safety of our country. A big reward waits.

Since this is a sponsored link, anyone could have placed that ad. There may be a Ruth and Hilda but whether they are gay or not is not the point. What seems clear is that someone, perhaps an enemy of Ruth and Hilda, wants to cause problems for these two people. If the Anti-Homosexuality Bill 2009 passes, one may expect many more such ads. The bill has the following provision:

14. Failure to disclose the offense.

A person in authority, who being aware of the commission of any offence under this Act, omits to report the offense to the relevant authorities within twenty-four hours of having first had that knowledge, commits an offense and is liable on conviction to a fine not exceeding two hundred and fifty currency points or imprisonment not exceeding three years.

Can you imagine the results of this requirement?

UPDATE: The page has now been altered and the want ad and poll are gone. Here is what it looked like prior to being removed.