Last week Michael Calderone pointed out that Glenn Beck was not truthful when he told Ted Cruz rally audiences in Iowa, South Carolina and Nevada that the copy of Don Quixote Beck displayed was the copy George Washington purchased on the day the Constitution was signed. In fact, that copy of Don Quixote, along with a Spanish edition, is owned by Mount Vernon’s library. Beck’s book was given by George Washington as a gift to friend Tobias Lear.
Furthermore, I discovered that Beck’s depiction of George Washington’s diary entry on the day he signed the Constitution was blatantly false.  Since then, I have found nine different recorded events where Beck told the entire false narrative involving the book and the diary entry.
As Breitbart News pointed out, Beck admitted to Huffington Post that he misled Cruz’s audiences about the book (but not the diary entry), but he did not admit it to his own readers. Instead, Beck took a defensive stance on his own website and accused HuffPo of sloppy journalism and lack of research.
Without comment or apology to the many people he misled on the campaign trail, Beck has switched gears and speeches. Now instead of displaying his copy of George Washington’s Don Quixote, he brought out the “Golden Ticket” from the movie Willy Wonka and the Chocolate Factory. Watch:
[youtube]https://youtu.be/Y0qdmR14MYo[/youtube] 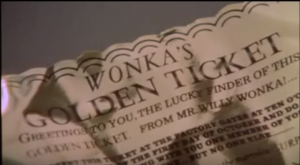 In other speeches over the weekend, he brought out a personal letter from President Reagan to his daughter Patti. Reagan hoped to talk his daughter into improving their relationship. Beck says Patti Davis sold the letter for drug money. He apparently picked it up at auction. At least that is his current story.
It is beyond me how Beck can claim to love truth while offering up such a hoax and how Ted Cruz can look the other way.