In at least seven speeches I have found online, Glenn Beck misled Ted Cruz rally audiences about his copy of Don Quixote once given by George Washington as a gift. Beck told audiences that he owned the copy of Don Quixote purchased by George Washington on the day the Consitution was signed. He didn’t. He has a later one which Washington gave as a gift to Tobias Lear. While Beck has yet to admit to his readers or listeners, he did admit it to HuffPo yesterday (see this link for the speeches and background).
Now I can report a discrepancy between Beck’s story about George Washington’s diary and the diary entry for September 17, 1787 found in the published collection of his entries online.
Here is just one instance where Beck tells audiences that Washington’s September 17, 1787 entry consisted of two lines. Watch:

However, according to the online Diary of George Washington, Washington didn’t mention Don Quixote or buying any books in his September 17, 1787 entry. He did mention the Constitution and provided more than one line about it. For photos of the original entries see the Diaries of George Washington (page one, page two).

Monday 17th. Met in Convention when the Constitution received the Unanimous assent of 11 States and Colo. Hamilton’s from New York (the only delegate from thence in Convention) and was subscribed to by every Member present except Govr. Randolph and Colo. Mason from Virginia & Mr. Gerry from Massachusetts. The business being thus closed, the Members adjourned to the City Tavern, dined together and took a cordial leave of each other—after which I returned to my lodgings—did some business with, and received the papers from the secretary of the Convention, and retired to meditate on the momentous wk. which had been executed, after not less than five, for a large part of the time Six, and sometimes 7 hours sitting every day, sundays & the ten days adjournment to give a Comee. opportunity & time to arrange the business for more than four Months.

The members partied at the City Tavern and then Washington recorded that he went to his lodging. He did pay for the copy of Don Quixote on that day but we don’t get that information from his diary. Thanks for the good folks at Mount Vernon, I can show you that we know the book was paid for on that day because Washington recorded the purchase in his cash account book.
In Washington’s Philadelphia Cash Accounts, he recorded the purchase of Don Quixote on September 17, 1787. 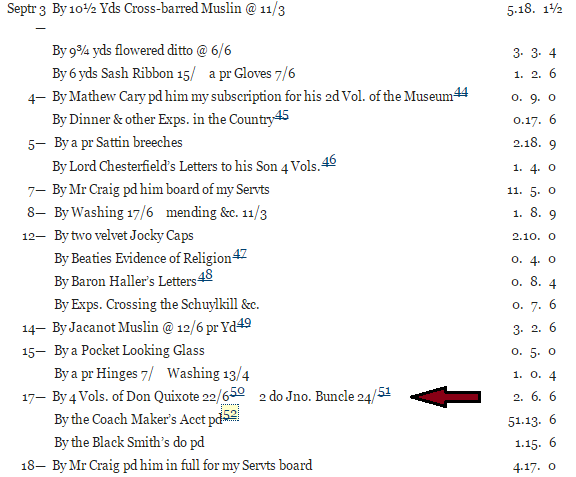 On the 17th of September, Washington recorded the purchase of the 4 volume set of Don Quixote.
The story behind the purchase more likely relates to Washington’s meeting earlier that month with the Spanish ambassador who engaged Washington in a discussion of the book. For more on that, see this entry on the Mount Vernon website.
If Beck has a source for his claim, I would certainly like to see it.
However, I feel sure he doesn’t. If Rick Tyler gets fired for relating a false story he thought was true, then how can Cruz make Glenn Beck the front door of his campaign?