As the Gipper used to say, “there you go again…”
David Barton spoke at Liberty University on September 9 and said that William Penn founded the Quakers, the early Unitarians were an evangelical denomination and Thomas Jefferson signed presidential documents “In the Year of Our Lord Christ.” That was just for starters.
At about two minutes into his speech (click the link and look for Barton on Sept. 9; you can also hear it at iTunes here), Barton said

We have the same thing when you look at Quakers. You see Quakers were founded by William Penn in Pennsylvania. I’ll lay you odds there’s no chance that William Penn would be a Quaker today, even in the denomination he founded, he would not be a part of. We look at it the way it is today and say it must have been the way they were back then.
And the example of that is what happens when you look at Universalist Unitarians; certainly not a denomination that conforms to biblical truth in any way but as it turns out, we have a number of Founding Fathers  who were Unitarians. So we say, oh wait, there’s no way the Founding Fathers could have been Christians; they were Unitarians. Well, unless you know what a Unitarian was in 1784 and what happened to Unitarians in 1819 and 1838 and unless you recognize they used to be a very evangelical Christian denomination, we look at what they are today and say the Founding Fathers were Unitarians, and say, there’s no way they were Christians. That’s modernism; that’s not accurate; that’s not true.

First of all, George Fox founded the Quakers and Penn later joined the movement. Penn was born in 1644 and Fox founded the Religious Society of Friends around 1647. Penn founded Pennsylvania but not the Quakers. Given the teachings of the Quakers, I suspect Penn might indeed be a Quaker today.
I wrote about the Unitarians in a post about John Adams and the Trinity. According the Unitarian historian Holley Ulbrichs, author of The Fellowship Movement, and member of the Universalist Unitarian church, Unitarians never believed in the Trinity and thus could not be considered evangelical. Ulbrichs told me in an email:

In 1819 William Ellery Channing preached a famous sermon in Baltimore at the ordination of Rev. Jared Sparks. The title of his sermon was “Unitarian Christianity.”  That brought to a head an ongoing battle between the religious liberals and the religious conservatives in the Congregational Church, of which John Adams was a member, but on the liberal side.  The American Unitarian Conference, later Association, came into being in 1825, a year before his death (and Thomas Jefferson’s), but both of them were very sympathetic to the anti-Trinitarian views that were at the heart of the controversy.
Unitarians were never okay with the trinity. Hence the name. Most of them like Jesus, but as a prophet, a role model, a nonviolent revolutionary. Not God.

Congregationalists were traditional in their beliefs but the Unitarians split from them. Adams and Jefferson were members of other denominations but it is clear from their correspondence that they favored the Anti-Trinitarian view.
Then finally for this post, Barton again asserts that Thomas Jefferson signed presidential documents – “In the Year of Our Lord Christ” during his speech to the Liberty students. He showed on the overhead a small portion of a document which is apparently referred to on his website as “his presidential act of October 18, 1804.”
It is unfortunate that Barton does not show the entire document so we can see what kind of “presidential act” it was. If you look closely at the picture, you can see that the words “In the year of our Lord Christ” are pre-printed on the page and not in Jefferson’s handwriting. 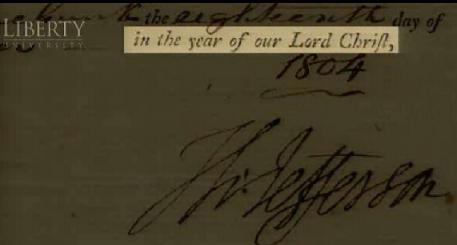 Barton has a similar document dated 1807 on his website. As I noted in this post, the words “In the year of our Lord Christ” were required by treaty with Holland and pre-printed on a form which was used for sea letters (a kind of passport allowing safe passage) and not written by Jefferson. I can’t find any other reference to Jefferson actually signing documents in this manner. Please see this post for an extensive refutation of the claim about the 1807 document.
This is just within the first 5 minutes.