Yesterday, I addressed David Barton’s claim that Thomas Jefferson authorized funds to evangelize the Kaskaskia Indian tribe. What he actually did was sign a treaty which provided funds to the tribe to help build a church and help fund the services of a Catholic priest for a brief period. The 200 or 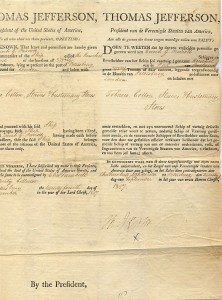 so Kaskaskia Indians were already predominantly Catholic and the funds amounted to part of a transaction in exchange for their land.
Today, I want to examine the claim by David Barton that Thomas Jefferson was so religious that he included mention of Jesus as Christ in government documents. Specifically, Barton points to the document to the left and says there is significance in the phrase, “In the Year of Our Lord Christ.” (click the image to enlarge it)
On his Wallbuilders site, Barton explains what he sees as the significance of the appellation:

Following is an original document in our possession, signed by Thomas Jefferson on September 24, 1807. This document is permission for a ship called the Herschel to proceed on its journey to the port of London. The interesting characteristic of this document is the use of the phrase “in the year of our Lord Christ.” Many official documents say “in the year of our Lord,” but we have found very few that include the word “Christ.” However, this is the explicitly Christian language that President Thomas Jefferson chose to use in official public presidential documents.

You can click the document to see the portion Barton has placed on his website. The English part is not completely visible, while the Dutch component is. I have enlarged the section which contains the phrase in question. 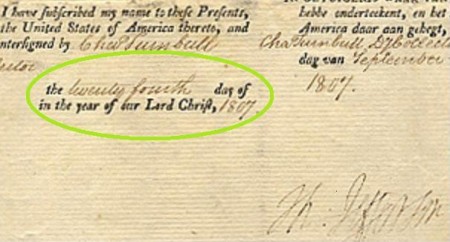 Jefferson did indeed sign this sea letter allowing safe passage for the Herschel to travel to London. However, Jefferson did not choose the “explicitly Christian language” in this document.
As is obvious from the document, this is a form which was preprinted with writing added based on the specific situation. This particular form was required by the Treaty with Holland of 1782 to be used as a kind of passport – called a sea letter – to allow safe passage of ships from an American port to the port of an enemy; more about that to come.  See the image below which describes the form as the “form of the Passport which shall be given to ships and vessels in consequence of the 25th article of this treaty:” This particular image comes from a book titled Reports of Cases Argued and Decided by the United States Supreme Court, compiled by a New York lawyers group in 1882.  The treaty referred to here was signed with Holland in 1782, the same year Holland became the second nation, after the French, to recognize the independence of the fledgling United States. England had declared war with Holland in 1780.
By 1807, Holland was essentially controlled by the French who were at war with England. For an American ship to sail to London, the sea letter displayed by Barton was necessary for safe passage. The treaty specified that

Art. 10. The merchant ships of either of the parties, coming from the port of an enemy, or from their own, or a neutral port, may navigate freely towards any port of an enemy of the other ally; thev shall be, nevertheless, held, whenever” it shall be required, to exhibit, as well upon the high seas as in the ports, their sea-letters and other documents, described in the twenty-fifth article, stating expressly, that their effects are not of the number of those which are prohibited, as contraband: and not 35*] *having any contraband goods for an enemy’s port, they may freely, and without hindrance, pursue their voyage toward the port of an enemy. Nevertheless, it shall not be required to examine the papers of vessels convoyed by vessels of war, but credence shall be given to the word of the officer who shall conduct the convoy.
Art. 11. If, by exhibiting the sea-letters, and other documents, described more particularly in the twenty-fifth article of this treaty… (my emphasis) 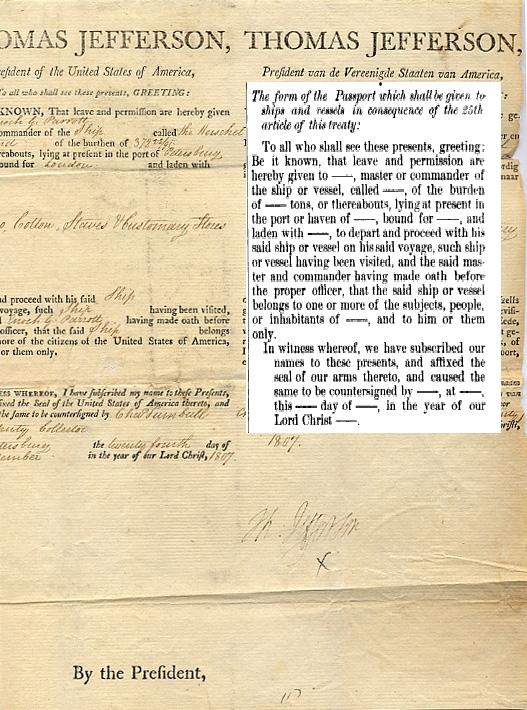