Perhaps trying to see how outrageous he can get, the man who was elected to be president, Donald Trump, posted the following video on Twitter.

While many of his die-hard evangelical followers were in church hearing about turning the other cheek and loving one’s enemies, Trump was tweeting a video inciting retaliation against journalists who report the news.
Jim Acosta had a good and appropriate response:

CNN response: “It is a sad day when the President of the United States encourages violence against reporters…” pic.twitter.com/YIlYewz3Gc
— Jim Acosta (@Acosta) July 2, 2017

Here is the clip of Sanders saying Trump never encouraged violence.
My guess is she will say he didn’t condone violence and have some rationalization for it all.
[youtube]https://www.youtube.com/watch?v=lkZ1XKKnTow[/youtube]
I wonder how Trump’s court evangelicals will handle this one.

Mars Hill is trending on Twitter right now. Here are some reactions from a variety of view points.

Mars Hill Church will cease to be a single multisite church. May each congregation flourish in Christ! http://t.co/9ShAq71kj5

My family and I appreciate your prayers as we explore all opportunities for what's next after @marshill https://t.co/W01aF6NR7a

"Marking its own Reformation Day of sorts?" By dissolving Mars Hill? Driscoll as Pope Leo? Huh? What? http://t.co/rZgOzn9LJV

Driscolls no longer pastoring there and shortly after mars hill will be no longer. Let this be a Stark reminder for men in ministry…

If you don't think denominations are worth it consider "The Rise & Fall of Driscoll & The Dissolving of Mars Hil" http://t.co/cUSOInKi14

I'm actually sad to hear of Mars Hill's demise. For all the people who now have to go church hopping, people now unemployed, hurt. etc.

A letter to the editor was published in the Seattle Times in defense of Mars Hill today. My point now is not to discuss or debate the contents of the letter; regular readers should be able to see the factual problems. I am glad the Times prints letter with a variety of opinions. Discuss it if you want in the comments.
What seems odd is what was happening on Twitter with the link. Many of the accounts don’t appear to be legit or at least they seem suspicious. Note the repetitive nature of them in this screen cap. 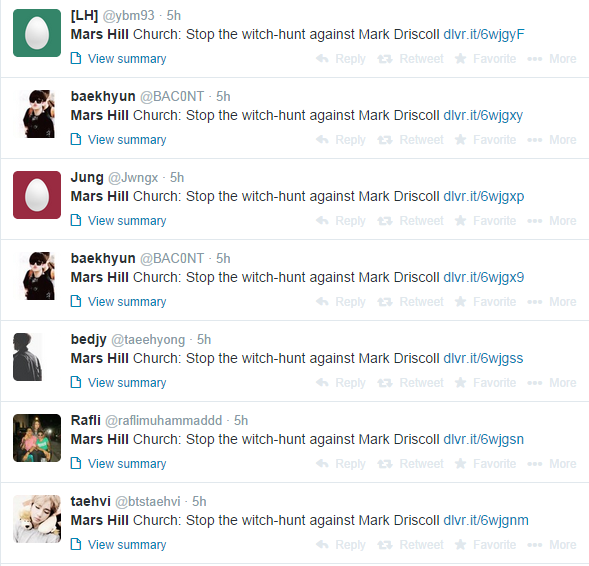 Take this one for instance: 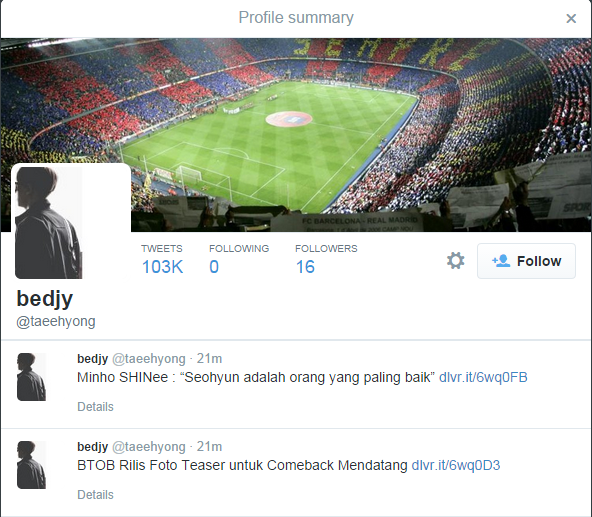 The account follows no one, only has 16 followers but 103k tweets.  A search for witch hunt and mars hill finds a lot of accounts like this. I don’t know what to make of it, but like a lot of issues surrounding this story, it is interesting, and you never know where something will lead. Does anyone have any ideas? Can retweets be purchased? And if so, what good would it do?