I have been reading (and cringing) through the court documents related to the Trump University fraud case. They do not paint a flattering picture of the failed educational venture. Mainly with this post, I want to link to the site where the documents are archived and encourage readers to explore the business dealings of the presumptive GOP nominee.
Searchable Trump University Documents
Just a nibble of what’s there. What should a Trump U. seminar salesman do if the potential buyer wants to discuss the matter first with a spouse? Buy it first, then talk. 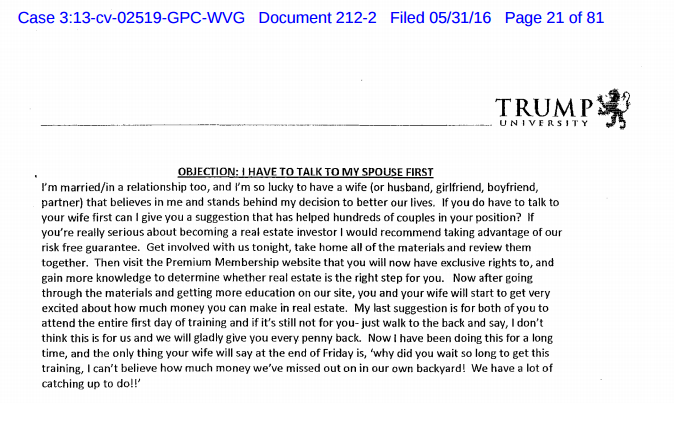 The whole approach is to do anything possible to separate the person from their money. Tell the audience Trump hand picked you when in fact he didn’t and so on.
When one adds in Trumps donations to state AGs who didn’t pursue a fraud case against Trump U., I think this case is poison for Trump’s chances in the general election.

Tonight in the GOP Debate, Trump University came up. Aided by Megyn Kelly, Marco Rubio made a point to bring out the ongoing nature of the case. Trump characterized the situation as a minor civil case. The facts seem to be different than Trump portrayed. Curious, I checked out the Better Business Bureau page as well as the most recent court action. Here is what I found:

NY AG Sues Trump Entrepreneur Initiative, Seeks $40M in Restitution for Consumers
Date of Action: 8/24/2013
The following describes a pending government action that has been formally brought by a government agency but has not yet been resolved.  We are providing a summary of the government’s allegations, which have not yet been proven.
On August 24, 2013, New York Attorney General Eric Schneiderman announced that he has filed a lawsuit against Donald Trump, The Trump Entrepreneur Institute — formerly named Trump University LLC (“Trump University”), and Michael Sexton, former President of Trump University for engaging in persistent fraudulent, illegal and deceptive conduct in connection with the operation of Trump University. Between 2005 through 2011, the lawsuit says that Trump University operated as an unlicensed educational institute that promised to teach Donald Trump’s real estate investing techniques to consumers nationwide but instead misled consumers into paying for a series of expensive courses that did not deliver on their promises. The petition filed in New York Supreme Court in Manhattan details the advertisements run by Trump University in major newspapers across the country and the direct mail solicitations sent to entice consumers to attend a free workshop. These ads prominently displayed Donald Trump’s photograph and signature, or were styled as letters written by Trump himself. The suit says the advertisements were replete with false claims, including claims that consumers would learn “from Donald Trump’s handpicked instructor a systematic method for investing in real estate that anyone can use.” Other ads promised “my handpicked instructors will share my techniques” or “learn from my hand-picked expert” and “just copy exactly what I’ve done and get rich.” Despite Trump University’s advertised claims, consumers attending free seminars did not learn Donald Trump’s real estate techniques. Instead, the lawsuit alleges that Trump University’s instructors made multiple misrepresentations to convince consumers to sign up for a $1,495 three-day seminar. And instead of providing all of the promised services, instructors then used the three-day seminars to pitch consumers an expensive Trump Elite mentor-ship programs costing $10,000 to $35,000. The New York Attorney General’s lawsuit seeks full restitution for the more than 5,000 consumers nationwide who were defrauded of over $40 million in the scheme.
In October 2014, New York State Supreme Court Justice Cynthia S. Kern ruled that Mr. Trump is personally liable for operating a for-profit investment school without the required license. She also tossed out some of the New York AG’s claims and ruled that some evidence is beyond the statute of limitations. Judge Kern ruled that several major aspects of the fraud lawsuit will be decided at a forthcoming trial.
On March 1, 2016, The Supreme Court, Appellate Division, First Department held that the New York State Attorney General is authorized to bring a cause of action for fraud under Executive Law §63(12), overruling a lower court’s decision on this cause of action.

Here are the findings referred to in the last paragraph just above. The fraud charges will be tried. This will drag on throughout the election.