END_OF_DOCUMENT_TOKEN_TO_BE_REPLACED

These days I am working toward completion of Getting Jefferson Right: Fact Checking Claims About Our Third President. A prominent focus of the book is David Barton’s new book, The Jefferson Lies. With GJR coming out, I intend to write more about both books going forward.

I have had many headslapping moments reading The Jefferson Lies. One of them is the subject of today’s post. In TJLs, Barton includes a chapter on what is commonly called The Jefferson Bible. In our book, co-author Michael Coulter and I fully explore the development of both of Jefferson’s efforts to extract what Jefferson considered to be the gold from the dross of the Gospels for his own use. The only surviving version of those efforts was titled by Jefferson, The Life and Morals of Jesus of Nazareth extracted textually from the Gospels in Greek, Latin, French & Latin. The term “Jefferson Bible” has become a short hand for this book completed sometime between 1820 and 1824 (we describe evidence in the book which seems to place the binding of the Life and Morals of Jesus closer to 1824).

In TJLs, Barton claims that Jefferson did not remove all of the supernatural and miraculous aspects of the Gospels. He claims this was not Jefferson’s intent. Despite the fact that Jefferson said on several occasions that such an extraction was his intent, Barton makes this claim based on passages he says Jefferson included. Most of the passages Barton offers as proof are verses about the afterlife. Truly, Jefferson did believe in an afterlife with rewards and punishments as appropriate. Jefferson did not believe in the atonement of Jesus but rather that good works in this life were necessary for a happy afterlife. In that sense, there is a supernatural element in Jefferson’s extraction. However, Barton includes as evidence of miracles, three miracles from Matthew 9 which are not in either the 1804 or 1820 version. Barton writes:

The footnote for this paragraph leads to Charles Sanford’s book on the religious views of Jefferson. Consulting that book, I find that Sanford does list those verses but when one examines the 1804 and 1820 extractions from Jefferson, Matthew 9 is not included in the 1804 version at all, and in the 1820 version, only Mt. 9:36 (where Jesus was moved with compassion on the people gathered around him) is there.

Apparently, Barton did not check the versions but rather simply accepted the erroneous citation of Sanford. And these are not only verses which Barton includes which were not included. We fully document all of this in the GJR book. There are several prominent instances like this in TJLs — where Barton cites a source but that source turns out to be in error or quite suspicious. When  we explore the source, we learn the story is not true or quite implausible.

This observation is relevant to fact checking. Barton and defenders almost always make a point to note how many footnotes he uses while criticizing books with fewer notes. However, many footnotes do not a fact make if the citation is unverified or in error. We may not get all of them in GJR, but we do get some major ones.

In an email to supporters, David Barton discloses the title of his upcoming book on Thomas Jefferson — The Jefferson Lies. 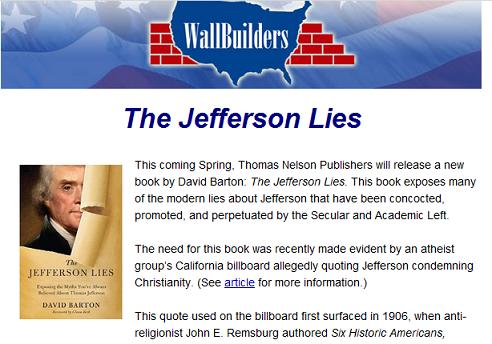 Barton is well qualified to speak about distortions of Jefferson’s work and beliefs since he has spread so many of them. I wonder if he will recant any of them in this book. He could start here, here, here, here, here, here, and/or here.
I am actually glad to see this. Publishing a book on Jefferson via a major publisher could provide the trigger for a broad conversation about Barton’s historical revisions. Perhaps, historians, including those that teach at other Christian institutions, will rise up en masse in response. I can imagine that we will see scathing book reviews in various religious publications which might wake up some Christians.
For more on David Barton, see this link.