This post is an additional note to our earlier post on Jefferson and the 1798 Thompson Bible. To briefly recap, David Barton says his description of the situation is accurate; we say it is not. Here is what Barton said in The Jefferson Lies about the Bible, followed by what he told Kirk Cameron in the movie, Monumental. First in his book:

Furthermore, in 1798 Jefferson personally helped finance the printing of one of America’s groundbreaking editions of the Bible. That Bible was a massive, two-volume folio set that was not only the largest Bible ever published in America to that time, but it was also America’s first hot-pressed Bible. President John Adams, several signers of the Constitution and Declaration, and other major Founders joined with Jefferson to help fund that Bible.

Then, in Monumental, Barton said:

This Bible was funded by about a dozen signers of the Constitution and signers of the Declaration as well as by President John Adams and Vice President Thomas Jefferson. They’re the guys that put up the financial backing to do this Bible.

When you see this stuff, you go wait a minute. These guys…why would any atheist, agnostic, or deist promote the Word of God, fund it and want it distributed to every family and everyone in America?

In our previous post, we noted that Jefferson did not finish paying for his copy of the Bible until January, 1799. In that post, we did not list all three payments. However, after getting some additional documentation, we can put together a little better picture of what probably took place. First, note this broadside dated January, 1798 advertising the Thompson Bible. 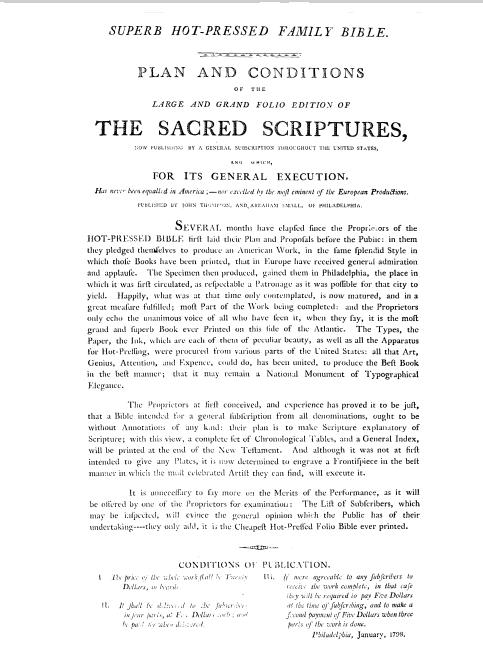 Because figure 1 is probably a little hard to see, you can click this link to see the PDF, generously provided by the American Antiquarian Society. We thank them for permission to use this image.

Remember that the first ad for this Bible was placed in the Gazette of the United States in April, 1796, also provided by the American Antiquarian Society. See figure 2 below: 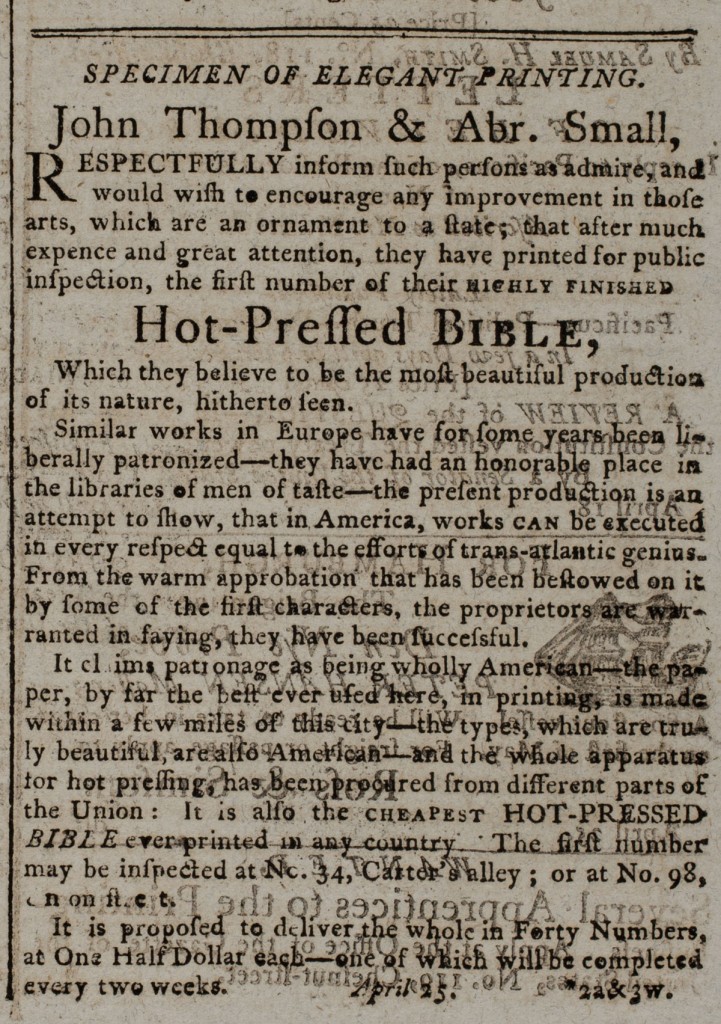 Given the dates of Jefferson’s payments, he either didn’t see this ad or he saw it and did not decide to do anything about it until about two years later.

The date on figure 1 above titled, “Superb Hot-Pressed Family Bible” is January, 1798. Jefferson’s first payment of $5.00 was made the following month on February 26, 1798. He must have seen the ad and it either jogged his memory that he wanted a copy of this Bible or he decided at that point that he would buy one. By that time, the Bible was mostly completed. Consider the text of the ad: 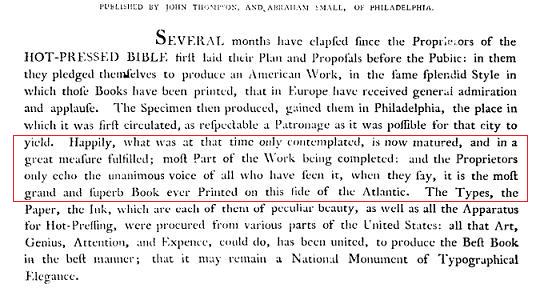 The section in red in figure 3 is especially important: “Happily, what was at that time only contemplated, is now matured, and in a great measure fulfilled; most part of the Work being completed: and the Proprietors only echo the unanimous voice of all who have seen it, when they say, it is the most grand and superb Book ever Printed on this side of the Atlantic.” The Bible was almost complete for the first wave of buyers.

To Jefferson who once said, “I cannot live without books,” this ad must have been irresistible. The Bible was almost complete and the proprietors, rightfully proud of their accomplishment, wanted to offer their “grand and superb book” to a wider audience. Those who had not subscribed at the beginning could still get in on the action. The terms of the purchase were spelled out by Thompson and Small at the end of the broadside (click the image to enlarge it). 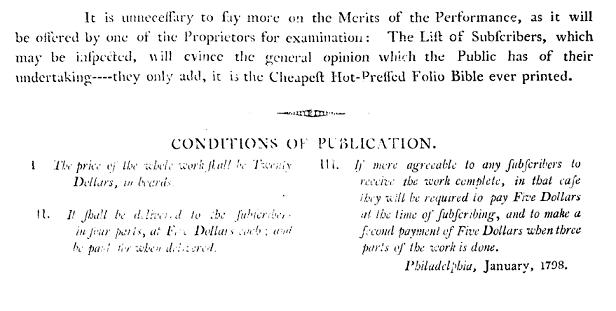 Note that a list of subscribers (hundreds by this time – see the full lists in Getting Jefferson Right) was already available for a potential buyer to examine. Then also see the “conditions of publication” in figure 4. Jefferson apparently agreed to the third approach because his first payment of $5 was recorded on February 26, 1798 (“Pd. 5.D. in part of 20.D. subscription for a hot press bible“*) with his second payment of $5 was made on May 26, 1798 (“Gave order on do. in favr. Thompson & Small in part subscription for bible 5.D.“), presumably when “three parts” of the work was done. His final payment of $10 was made on January 5, 1799 (“Gave Thompson & Small ord. on J. Barnes for 10.D. the balance due for a hot press bible.“).

It should be now abundantly clear that Thomas Jefferson did not specially finance or go together with other founders/signers to “put up the financial backing” for this Bible in the manner implied by David Barton in his book and in the movie, Monumental. He purchased one Thompson Bible using a payment plan.

Earlier posts in this series:

Jefferson and Slavery: A Response to David Barton on the Glenn Beck Show, Part One

Jefferson and Slavery: A Response to David Barton on the Glenn Beck Show, Part Two

Jefferson and Slavery: A Response to David Barton on the Glenn Beck Show, Part Three

Jefferson and the Bible: A Response to David Barton on the Glenn Beck Show, Part Four (This post also discusses the Thompson Hot-Pressed Bible)

Jefferson and the Bible: A Response to David Barton on the Glenn Beck Show, Part Five