ON Tuesday, I linked to a NYT article about the controversy over teen suicides in the Anoka-Hennepin School District. In that post, I noted that a parents’ group in the Minnesota district — the Parent’s Action League — used books and articles from NARTH and Exodus to make the claim that gays can and should change their orientation. (I should have also noted the involvement of Mission America and the American College of Pediatricians as well since materials from both groups are used by the PAL.)
On point, today Andy Birkey has a summary of events relating to the eight suicides and the controversy in the community about how to handle sexual orientation in the schools. I recommend reading it as a place to start in understanding the situation there.

Some have asked me why I initiated and supported the Golden Rule Pledge Initiative along with the Day of Silence. Watch this video and I hope you can feel a little of the anguish that is the daily life of a child who is the target of bullying.

The song is a way of introducing the new e-book Bullycide in America: Moms speak out about the bullying’suicide connection. Full disclosure: I have some articles in this book and have done some volunteering for this group. These stories and those of kids I know have touched me in profound ways and I hope will go a long way toward creating change. There are multiple factors which inform an understanding of bullying and I hope these cases and articles will help raise awareness. 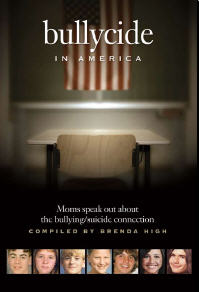