Personally, I think the possible comparison is to Musolini but all of this is debatable and the jury is still out. I will add that Metaxas should clean up his own house before he scolds anyone about historical knowledge (when will Metaxas issue a retraction on the spurious Bonhoeffer quote he has promoted for years?).
However, what caught my eye was his retweet of Ann Coulter’s justification of Trump’s mocking references to New York Time reporter Serge Kovaleski. In her column yesterday, Coulter refers readers to footage of Trump also mocking a General and Ted Cruz. She claims the footage proves that Trump did not mock Kovaleski’s disability. Metaxas retweeted it with this message.

Would you believe Trump did NOT make fun of that disabled reporter? Read this and you will. This is genuinely scary. https://t.co/dKlJ2Y5Nxp
— Eric Metaxas (@ericmetaxas) September 1, 2016

Scary, indeed.
What makes Metaxas’ defense of both Trump and Coulter astonishing is how Coulter defends Trump in her new book. In that book, she claims Trump was not mocking the reporting due to his disability, but because he clarified earlier reporting on Muslim response after the 9-11 attack on the World Trade Center. She said Trump was just doing a “standard retard” in order to mock Kovaleski. Make sure you read the sentence with the word “retard” highlighted in yellow. 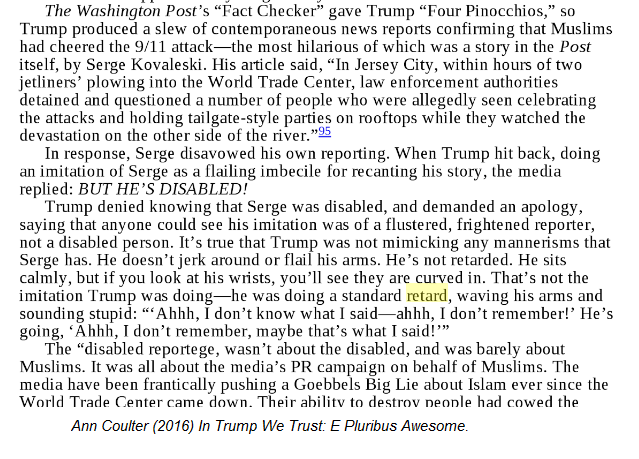 Standard retard? Apparently, Coulter thinks having a standard move to mock intellectually disabled people is more acceptable than tailoring one’s ridicule to individual disabilities.
I ask myself: Why is Eric Metaxas recommending Coulter’s defense of Trump making fun of anyone? Because Trump used his “standard retard” to ridicule three people, it is somehow better than using it to make fun of one disabled reporter? I am truly confused by how this justification of inexcusable behavior can be considered the kind of virtue that Metaxas hawks in his new book.
Did Trump Ridicule a Disabled Reporter?

I watched the clips Coulter recommended and I don’t think it is as clear as she does.
First, she doesn’t address why Trump said he didn’t know the reporter when in fact he did. Trump said he was a nice person and told the crowd before he launched into his mocking routine that “you gotta see this guy” referring to Kovaleski. Trump then accused the reporter of using his disability to grandstand (see the Politifact article on these points).
Also, Trump is much more animated and draws his arms up to his body (akin to Kovaleski’s disability) while flailing around when he is mocking Kovaleski more so than when he mocks the General and Ted Cruz. I have embedded the videos below. Watch and decide for yourself.
Trump on Serge Kovaleski and the General:
[youtube]https://www.youtube.com/watch?v=LQQq50JWsmY[/youtube]
Trump on Ted Cruz (which this excellent piece points out is three months later! Reporters could not have ignored the response to Cruz since it hadn’t happened yet.)
[youtube]https://youtu.be/M4604reEqk0[/youtube]
Whether Trump singled out Kovaleski or was “doing a standard retard” doesn’t matter much to me. It is a very Sad! day when political pressures lead to defense of the indefensible.