Earlier this week, David Barton told his Wallbuilders Live co-host Rick Green that he once was fluent in Russian, was asked to translate for the Russian National Gymnastics Team in 1976 and smuggled Bibles into the Soviet Union “back in the day.”  Here is the audio followed by the transcript (blog note – Barton removed the audio):

Barton: That’s right, and South Korea. South Korea, Nigeria, they’re sending missionaries to America like crazy. And of course, if I looked at the stats on America, yeah we’re number one in the world on violent crimes, yeah and promiscuity, sexuality yeah and out of wedlock births yeah and and lack of marriage yeah we need some missionaries here. We need somebody who can point us to the Bible and you’re right I mean that was started going years ago just based on the stats that South Korea and Nigeria were sending Christian missionaries to America to help get people in America back to the gospel. Which ya know it looks like we’re moved further away from that then where we were even a few years ago when we talked about it so maybe some of these kids’ll- and by the way it was kind of a déjà vu thing but ya know Dirk was saying that it started as a smuggling operation, that’s really where I got started with the Soviet bloc back when the Iron Curtain was up was…I spoke Russian, I was fluent in Russian and when the Russian uh gymnastics team came to America in 1976, I got to be translator for ‘em and do translating just so…the accounts of when we went to stores was a blast.

Barton: I don’t now, but I was at one time fluent in Russian and again translated for the Russian gymnastics team when they came to America, but at the same time we were working our tails off to smuggle Bibles into the Soviet Union and and had several trips that went there smuggling Bibles in, so

Green: I wish our show was on television so people could see my shocked face right now. You interpreted- you were- I had- I didn’t know any of this.

Barton: Yeah that’s back in the day, bro.

Green: Wow, that’s amazing! So this show was pretty cool for you then

Barton: Oh yeah, it it was because it was a reminiscent of all the smuggling time and how dangerous it was and you know the Soviet bloc and the guards at the borders and all the stuff that went on there, pretty amazing.

Rick Green was flabbergasted by the claims. I was skeptical when I first heard the claims, and now after several lengthy interviews with people involved in gymnastics and trampolining in the 1970s, I am even more skeptical. I also talked to the wife of the late Bill Basansky, Barton’s Russian teacher at Oral Roberts University. Yes, Barton took a Russian class, but that may be about as close as that story gets to being plausible.

Fluent in Russian and a Bible Smuggler?

Let me first take up Barton’s claims that he was fluent in Russian and that he smuggled Bibles. Yesterday, I spoke with Beatrice Basansky, the widow of beloved Oral Roberts University professor of modern languages, Bill Basansky. Mrs. Basansky, who is a Barton admirer, said Barton took a course in Russian from her husband. She did not know how well he did in the language. She said  with firm conviction that Barton did not help her husband with Bible smuggling. She told me that there were only two men who helped her husband smuggle Bibles into Russia and Barton was not one of them.

It is very hard to imagine that one course (or even two if it was Russian 101 and 102) could lead to fluency in any language, let alone Russian. Perhaps Barton doesn’t understand the meaning of the word fluency (just like he apparently doesn’t understand what verbatim means). On the smuggling claim, this information from Mrs. Basansky doesn’t prove Barton never smuggled Bibles into Russia, but he apparently didn’t do it with his Russian professor. There were other professors at ORU who had interest in evangelizing the Soviet bloc countries (e.g., Steve Durasoff, Keith Nordberg) and Barton might have gone with one of these teachers. In my view, the smuggling claim is relatively unremarkable compared to the claims that he was fluent in Russian and translated for the Russian Gymnastics Team.

Did Barton Translate for the Russian Gymnastics Team?

On the fantastic claim that Barton translated for the Russian Gymnastics Team, I spoke to two people who had knowledge of U.S. gymnastics and trampoline and tumbling events where Russians participated in 1976. I spoke at length with Ron Munn who worked for the Nissen Corporation. Nissen provided personnel and equipment for the Russian Gymnastics Team tours of the United States. I also corresponded with Leigh Hennessy Robson, who won an event in the World Trampoline and Tumbling Championships held at the Mabee Center at Oral Roberts University in July 1976. The importance of that event and Mrs. Robson’s participation will be clear shortly.

I found Munn through this blog post about the Nissen Corporation’s activities in the mid-1970s. He told me about several tours of the U.S. by the Russian Gymnastics Team through the 1970s but said there was only one in 1976. The Russian team was in Montreal from mid-July through early August for the Olympics. These Olympics featured Romania’s Nadia Comaneci, and Russia’s Olga Korbut and Nellie Kim. Later in 1976, the Russian team toured the U.S. for about 2 weeks in December. Munn supplied images from the program which I will provide at the end of the post. Munn spent time with the team, and even went dancing with Olga Korbut on one of the tour stops. He does not recall any outsiders working in translation with the team. The Russians brought their own interpreters which was customary for international sports teams (see this image, which is also below, for a picture of an interpreter in a program for the 1974 Russian Trampoline Gymnastics Team). Barton’s claim here seems extremely far fetched.

Perhaps Barton was thinking of the Russian Trampoline Team which competed in the World Trampoline Championship at Oral Roberts University in July 1976. In addition to his work on the Russian gymnastics tours, Munn was also at ORU as an announcer for the event as a part of his work with the Nissen Corporation. This company was founded by George Nissen who invented the modern trampoline and developed the sport internationally. Munn married one of Nissen’s daughters.

I also corresponded with Leigh Hennessy Robson, a competitor for the United States who won two gold medals and a silver at the meet. Robson’s father, Jeff Hennessy, was the meet director. Leigh and her father are the only father-daughter pair to be inducted into the USA Gymnastics Hall of Fame.

Leigh Robson said that the Russian team brought their own interpreters. She told me, “Rest assured, David Barton did not translate Russian at the 1976 World Trampoline and Tumbling Championships at ORU.” She said the Russians also brought their own security to monitor the team. Munn added that the Soviets were concerned about Russian athletes defecting so they kept them under constant watch. The idea of using American translators did not make sense to Munn or Robson.

After all is said and done, David Barton took Russian from a professor who smuggled Bibles.

I asked Barton for evidence yesterday via Twitter with no reply. If he has any evidence for this claim or for the claim that he played Division One basketball for Oral Roberts University, I would be interested in seeing it.

Thanks to Ron Munn, Leigh Robson and Beatrice Basansky for their time and interest.

Thanks to Ron Munn for these images from the 1976 Russian Gymnastics Team tour program. 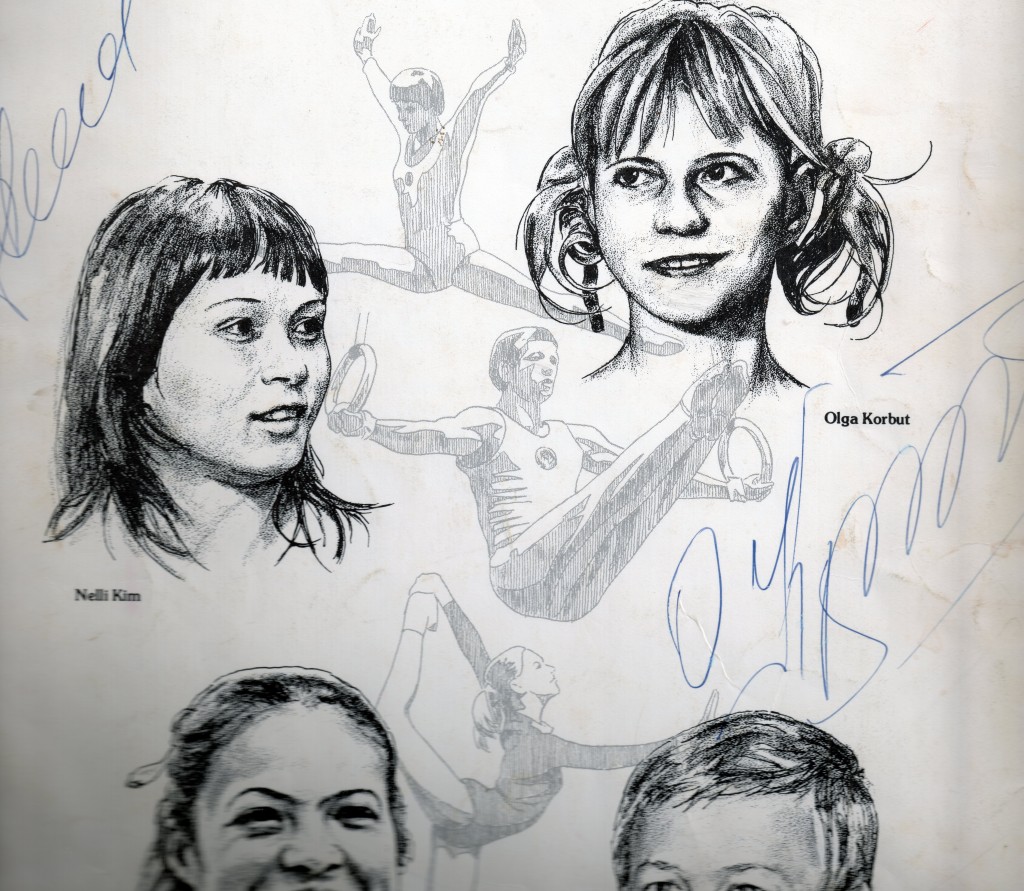 Note the cities where the tour took place: 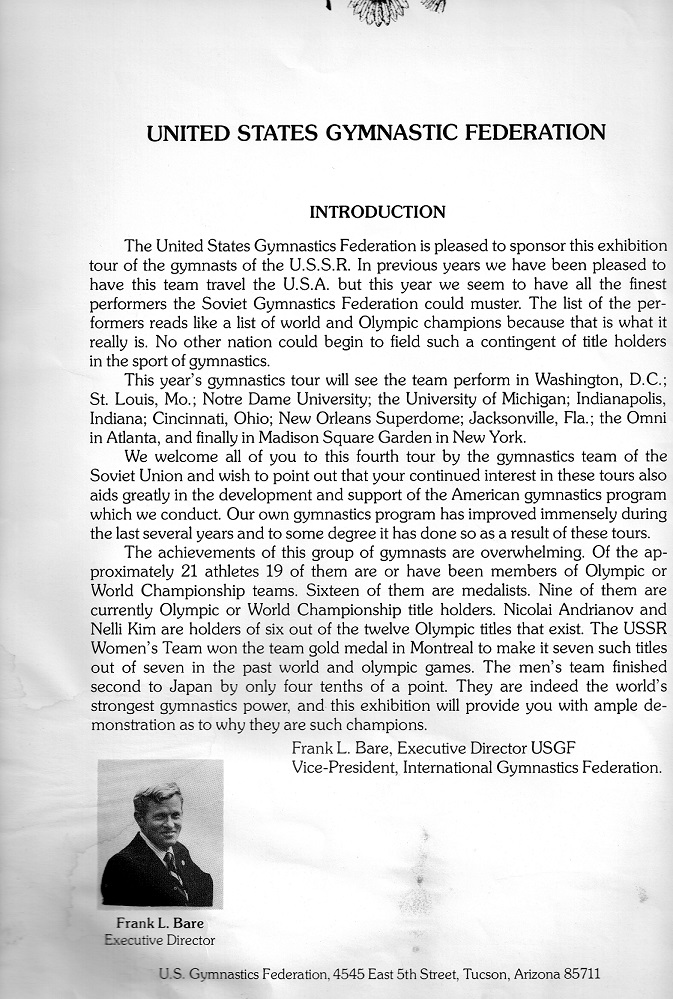 The Russian team out dancing in New Orleans. Olga Korbut and Ron Munn are on the right: 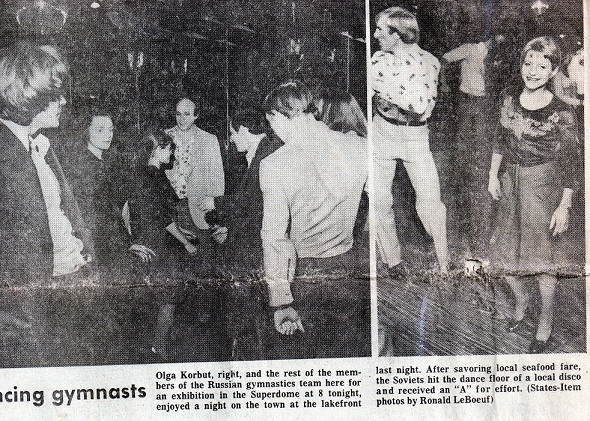 Munn also had a program from 1974 when the USSR Trampoline team did an exhibition at the Mabee Center at ORU. Note the picture of interpreter Maya Ermolaeva who accompanied the team. Maybe, instead of Bibles, Barton smuggled himself into the Russian quarters. After all, he said it was a “blast.” 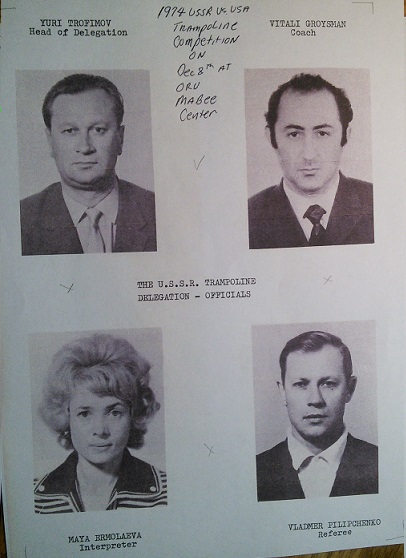