Finally, while we did delay the publication date of Mark’s latest book, The Problem with Christianity, as we look for the best season in which to publish it, we have not altered our full intention to release it as a Tyndale title. This is a groundbreaking book that we believe will be greatly beneficial to the Church.

According to a March 2013 internal Mars Hill Church document provided to me, The Problem with Christianity was originally slated to be released in February 2014. Apparently, Valentine’s time is not the “best season.”
According to Driscoll, speaking in the November 1, 2013 Christian Post, the book was moved to the fall of 2014.

I will close out the conference with the findings from a massive research project we have undertaken about the most common objections to Christian faith by the unchurched and de-churched ages 18-44 that is the basis for my next book due out next fall that I am currently writing as the follow up to A Call To Resurgence. The tentative working title is My Problem With Christianity. This is the biggest research and writing project I’ve ever been a part of and the findings are surprising and enlightening while also discouraging.

Again, apparently the fall of 2014 is not the “best season.”
To the Christian Post, Driscoll mentions research that is to be the basis of the book. That research was conducted in the Spring of 2013. Given that the surveys were about trends among unchurched people, it seems like it would be good to get the research in front of people while it is still current. However, if this fall is not the “best season” then what season would be best? How much longer should Tyndale wait to bring out research done in the spring of 2013?
The book has been removed from Tyndale’s website after being up for weeks.
Maybe spring of 2015 will be the “best season,” two years after the research was conducted. If Tyndale waits much longer, it will be hard to make a case that the book is “groundbreaking.” Some research is timeless or at least has a longer shelf life, however; it is hard to make a case that trends among the unchurched fall into that category. On reflection, Tyndale’s reason for delaying the book doesn’t seem like much of a reason, certainly not a reason for waiting for another season to pass.

UPDATE: The Christian Post has updated their article on Tyndale’s statement regarding Resurgence by adding my statement and Todd Starowitz’s email to me.

Editor’s Note: Wednesday, July 2, 2014
Warren Throckmorton, author of the cited Daily Beast article concerning Mark Driscoll’s business relationship with Tyndale House Publishers, provided the following statement via email to The Christian Post:
“My reporting regarding Tyndale House and Resurgence Publishing was based on information disclosed to me by Todd Starowitz, senior public relations manager at Tyndale. I reported it accurately as Mr. Starowitz now confirms. Tyndale House had ample opportunity to provide additional information last week in response to multiple questions from me but did not choose to do so. I hope Tyndale House will now fully accept the responsibility for providing incorrect information. …”
Throckmorton has published on his Patheos website reproductions of email exchanges between himself and Starowitz. In one email that Throckmorton said he received from Starowitz Tuesday afternoon, and which the Tyndale senior public relations manager confirmed as accurate with CP, he states: “Warren, your quotes of my emails were accurate. With that said my second email said that we did not have anything further scheduled AT THIS TIME. In no way was that to suggest that the relationship had ended. On the first item, I was simply wrong. I didn’t check with the appropriate people. I take full responsibility and the error was mine and mine alone. I also could not respond to your additional queries because I simply did not have the information I needed to respond.”

I am still waiting for the precise statement from Tyndale but according to this report in Christian Retailing, Tyndale is questioning the Daily Beast article.  I will have more to say about this when I see the statement but I stand by my reporting. I have the emails from Tyndale House’s Todd Starowitz. Also, I asked at least twice for clarification about what the publication delay and lack of reprinting meant with no answer from Tyndale.
Here is the statement from Tyndale. However, note the emails from Todd Starowitz below.
From: Todd Starowitz <toddstarowitz@tyndale.com>
Date: Wed, Jun 18, 2014 at 10:16 PM
Subject: Re: Mark Driscoll’s next book
To: Warren Throckmorton <warrenthrockmorton@gmail.com>

Warren, we did not print a paperback version. I don’t expect that we will reprint the hardcover.
Todd Starowitz
Senior Public Relations Manager
Tyndale House Publishers
(630) 784-5397
toddstarowitz@tyndale.com

I received this from Todd Starowitz this afternoon:

Warren, your quotes of my emails were accurate. With that said my second email said that we did not have anything further scheduled AT THIS TIME. In no way was that to suggest that the relationship had ended.
On the first item, I was simply wrong. I didn’t check with the appropriate people. I take full responsibility and the error was mine and mine alone.
I also could not respond to your additional queries because I simply did not have the information I needed to respond.
Regards,
Todd Starowitz
Senior Public Relations Manager
Tyndale House Publishers

I appreciate Todd Starowitz being a stand up guy and issuing this statement to me. Now I hope his employer will retract what they had to say about my reporting. There have been some reports from other news sources that did go too far and I can understand Tyndale wanting to make that right.  However, I did not say the relationship had ended. I regret that people got the wrong idea from the article but I can only report what I am told. I think it is surprising that they were so cavalier about their relationship with Driscoll. I note that Tyndale did not apologize to him for giving a writer inaccurate information.
I have some other issues with their statement but I will take those up later.
———————–

I am getting word that Tyndale House may have something else to say about their relationship with Resurgence yet today. In the mean time, I want to post the screen cap of Tyndale’s promotional page for My Problem with Christianity before my recent contacts with Tyndale and what it is now.
Then (Google cache May 9): 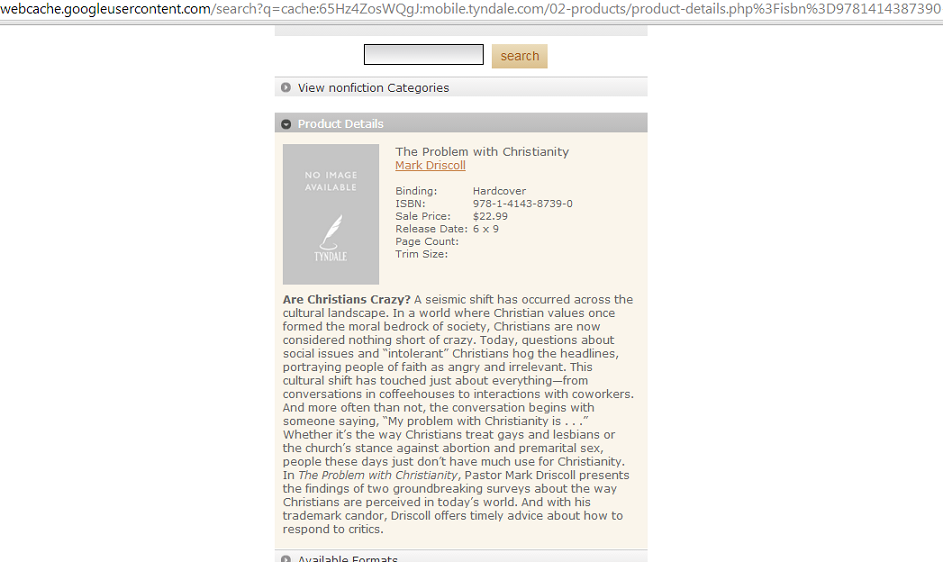 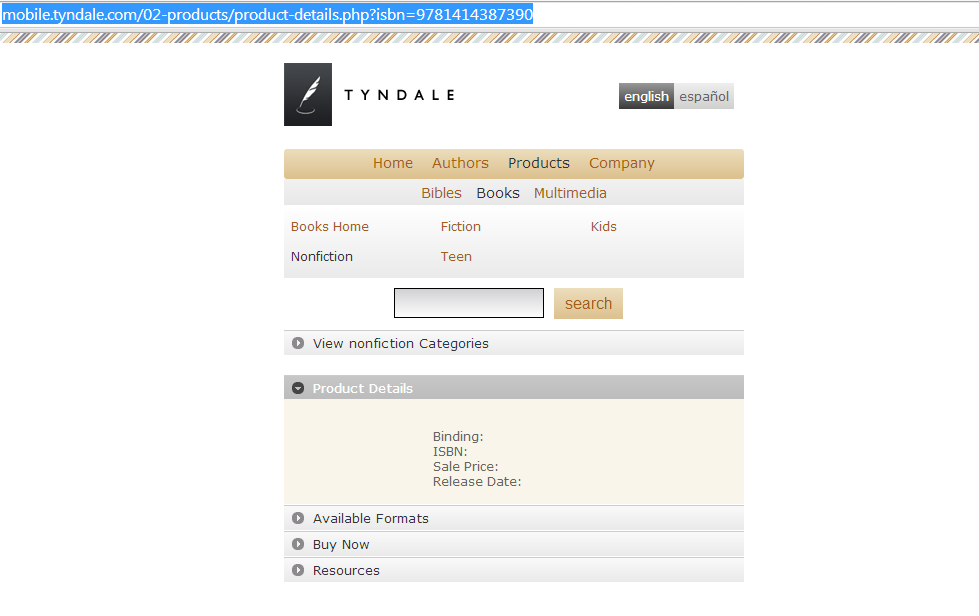 If you go to any other links for My Problem with Christianity, the book is not listed on the Tyndale website.

At this time we do not have a pub date for The Problem with Christianity.

I also asked if any other books were slated to be published by the Resurgence imprint. I already knew Elyse Fitzpatrick’s book was scheduled for this Fall and Starowitz confirmed that her book was coming out in September. However, he also said:

To my knowledge we do not have any additional Resurgence titles that have release dates scheduled at this time.

In early 2013, Resurgence seemed poised to publish several titles with Tyndale House. Now, the flagship author does not have a publication date and no other titles are on the schedule.
———————————–
After Mark Driscoll’s book Real Marriage shot to the top of the New York Times Bestseller list for self-help books for one week in January of 2012, he secured a publication deal with Tyndale House for his Resurgence imprint. Now we know that Real Marriage was assisted in the climb to #1 status by a contract with Result Source, a firm which pursues bestseller status by gaming system of book sales counting. Driscoll’s next book from Tyndale has the working title, The Problem with Christianity, and was once slated to be published this fall. However, according to Tyndale House, the book will not be published in the fall after all.
In late May, Tyndale sent a tweet in response to my question about the book:

@wthrockmorton Hi Warren, the book will not be releasing this fall as originally scheduled.

Tyndale House did not reply to a follow up question asking when the book would be published. The book description is still on the Tyndale website:

Are Christians Crazy? A seismic shift has occurred across the cultural landscape. In a world where Christian values once formed the moral bedrock of society, Christians are now considered nothing short of crazy. Today, questions about social issues and “intolerant” Christians hog the headlines, portraying people of faith as angry and irrelevant. This cultural shift has touched just about everything—from conversations in coffeehouses to interactions with coworkers. And more often than not, the conversation begins with someone saying, “My problem with Christianity is . . .” Whether it’s the way Christians treat gays and lesbians or the church’s stance against abortion and premarital sex, people these days just don’t have much use for Christianity. In The Problem with Christianity, Pastor Mark Driscoll presents the findings of two groundbreaking surveys about the way Christians are perceived in today’s world. And with his trademark candor, Driscoll offers timely advice about how to respond to critics.

A companion DVD is also advertised.
Amazon has the release date as January 1, 2015.
My question to Tyndale was “When do you plan to release Mark Driscoll’s new book?” The answer “not this fall as originally scheduled” told me when it wasn’t going to be released but nothing about the planned date. Perhaps the book’s publication is on hold indefinitely.
Also of interest in the aftermath of the Result Source deal is the absence of Driscoll from his agent’s list of clients. As first reported by Wenatchee the Hatchet, Yates and Yates currently does not list Driscoll as a client. I left Yates and Yates a couple of questions on their website which have gone unanswered.