Yesterday, World Magazine published an article by Warren Cole Smith which described a contract between Mars Hill Church (MHC) and ResultSource, Inc. (RSI) for the purpose of elevating Mark Driscoll’s book Real Marriage to various best seller lists.  The arrangement was successful, leading to a week atop the New York Time’s best seller list for advice books. Mars Hill Church does not deny this but spun the arrangement as a means to spread the gospel.

I have a copy of the contract signed by Mars Hill executive pastor Sutton Turner and Mat Miller at RSI. In 2013, Jeffrey Tractenberg investigated RSI for the Wall Street Journal and interviewed various people who had worked with RSI. In that article,  author Melissa Wilson described the RSI strategy as “the secret sauce.” With World’s reporting and now this contract, the sauce isn’t so secret anymore.

Initially, the contract spells out the numbers of copies needed for individual and bulk sales.

Apparently, the publisher must be on board with this arrangement as well since the contract requires the publisher to supply the proper number of books. I have asked Harper Collins Christian for comment but they have not replied as yet.

The names and addresses are apparently very important in making sure that these purchases escape detection by those who compile the best seller lists. 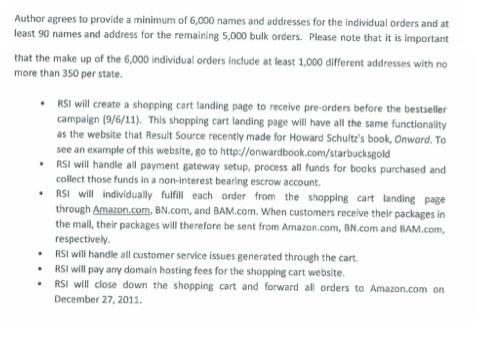 This method seems consistent with my speculation from yesterday. MHC got a donation and address from people who wanted a “free” copy of the book. I suspect that some of the people at those addresses then got books from Amazon or some other book seller.  Via the pre-release solicitation or by some other manner, those names and addresses were given to RSI to use with their payment methods to purchase books via online or other sellers.

Others may have been gathered together and brought to the church or in addition to the mail orders, the church bought books in bulk. I spoke to a former Mars Hill pastor last night who told me that some MHC locations had hundreds of books just gathering dust. Some of those bulk orders might still be sitting in MHC storage rooms.

With some private information excluded here is the entire contract.
For all posts on this topic, go here.