In the past, Gospel for Asia has spent donor money on “reputation management” — using fake accounts to flood social media with positive information about GFA.  It appears they are at it again. On twitter, the image below is the result of a search for GFA. 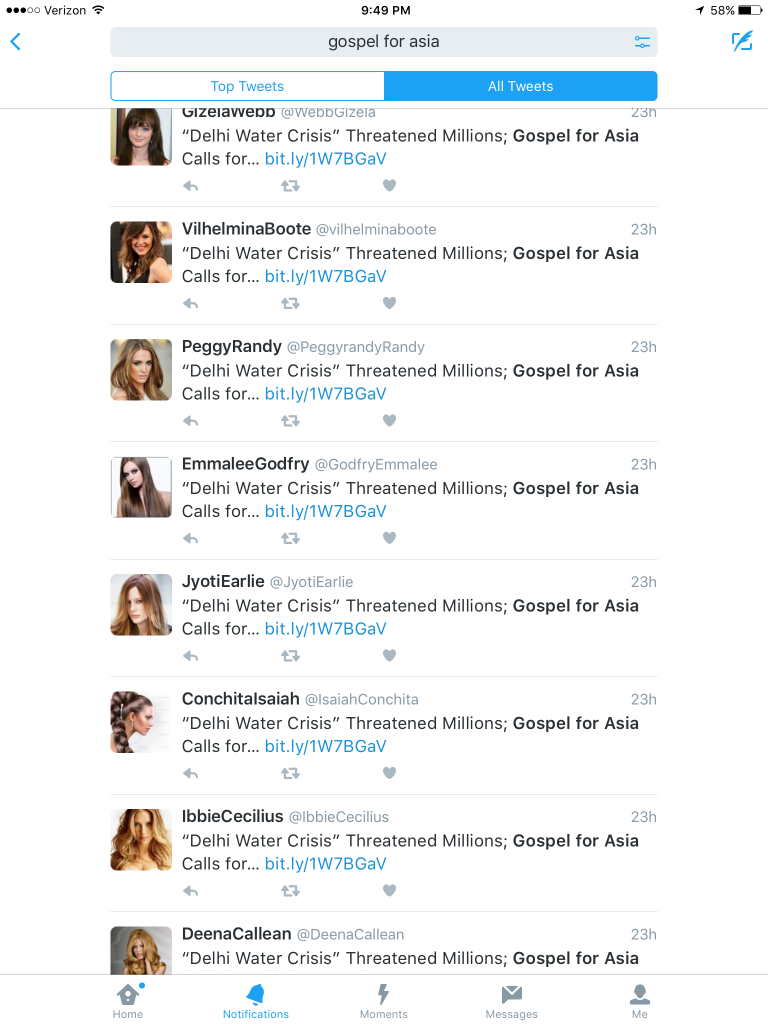 The glam photos, odd name combos and exact same message give away the spam. I am not sure of the value of these tweets since the accounts are quite small. In any case, someone is reporting lots of social media traffic which is ultimately fake.
The following accounts also appear to be fake. 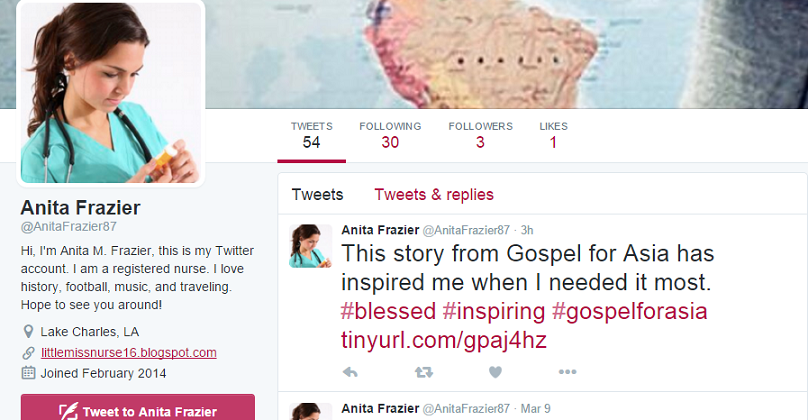 The format is all the same (there are dozens of these) and they all hope to see me around. I doubt it. They link to blogs which are either fake addresses or to blogs which have no entries.
We know GFA has contracted with Reputation Management Consultants in the past to shore up GFA’s image. Instead of a grassroots uprising of donors defending GFA, it appears that more donor money is going to Christian astroturf.

Doing some reputation managing of their own, Reputation Management Consults and/or Gospel for Asia requested that my post on their partnership be removed by Patheos due to a claim that I violated their copyright by using images from reports given to GFA.  The request came in such a manner that it is not clear exactly who issued the take down notice, but I believe it was RMC. I have posted many GFA images without problem so I suspect RMC was behind it.
Patheos took the post down while I reviewed the complaint, along with Patheos management. We agreed that the images were fair use but have decided not to press the matter at this time. Instead, readers can review the post reposted below. It is important to note that the facts were not contested. Apparently, the images provided more information than these groups wanted out.
…………………………
(original 8/31/15 post)
In June 2014, a group of former Gospel for Asia staff members sent a letter to GFA’s board alleging a pattern of unbiblical practices involving top leaders, including founder and CEO K.P. Yohannan. Over time, more staff left GFA and joined the GFA Diaspora group (over 100 now).
As the Diaspora group grew, GFA leaders developed several responses. One strategy was an attempt to disseminate positive information about GFA throughout social media. Another was to hire a company to manipulate Google search results by creating many redundant websites with positive information about GFA. To do this, GFA hired Reputation Management Consultants to create the websites. According to an internal document (see below) the fee set aside for this effort was $70,000 (go to the last line item).

According to former staff, the “Reputation mgmt” line item of $70k was required to pay Reputation Management Consultants for seven months. RMC describes itself as follows:

RMC has innovated new strategies and techniques that repair existing damages, clear your reputation, and safeguards against new attacks, all while doubling as an effective online PR campaign.

Links to the February and March reports to GFA from RMC are here and at the end of the article. It appears that RMC created a bunch of websites with positive stories about GFA to influence the results of Google searches.

The goal of the campaign was to “push down” negative information so that it appears “after position 30 in major search engines.”

Most of these links go to websites with very little activity beginning in November or December of 2014 and ending in April of this year.
It is possible that the campaign ended early with less than $70 being spent. According to the reports below, RMC planned to take the campaign into April.
As an aside, if anyone reading this wants to give me $70k to create websites and buy domains, I am ready to go. I suspect anyone who has opened accounts or run a blog is amazed that so much money was paid for free social media accounts and sparsely populating a few blogs.
Given the austerity encouraged by GFA’s CEO K.P. Yohannan, it is surprising to see him use donor money to push down negative articles about himself. Perhaps I shouldn’t be surprised; GFA and Believers’ Church in India are suing Google and Facebook in India over what they claim is false information disseminated on those sites.
If pushing down negatives is what GFA is about, then they need to rehire RMC. This article about K.P. Yohannan’s ring is in the top ten on Google.
In his book Touching Godliness, K.P. Yohannan wrote:

Those in authority should never fight for themselves.  We need to simply leave it to the Lord to defend us.  He will do a much better job in His time and His way than we ever could.  In fact, when a leader fights to establish his authority, he actually loses his ability to lead. (p. 189).

Just think of the $70,ooo savings if GFA and Rev. Yohannan would address the Diaspora’s concerns rather than try to push down these issues. In fact, a re-read of Road to Reality in light of the fact that “the field” had to take a $19.8 million loan so that GFA could afford Wills Point might be in order for GFA’s decision makers.