After NewSpring Church former pastor Perry Noble was fired by the church he founded, he went into a brief period of media silence. The firing related to alcohol use and family issues and the response was to enter rehab followed by a helping relationship with psychologist John Walker. More recently, Noble launched a consultation business called the Growth Company which targets both businesses and churches.  Even more recently, Noble has been preaching at churches as a guest speaker. Now, apparently, Noble plans to launch a new church — Second Chance Church.

According to a filing with the South Carolina Secretary of State on 7/14/17, Perry Noble incorporated the Second Chance Church as a religious organization in South Carolina.  The incorporation papers are routine for a church except that this church only requires three board members and they do not have to live within South Carolina. 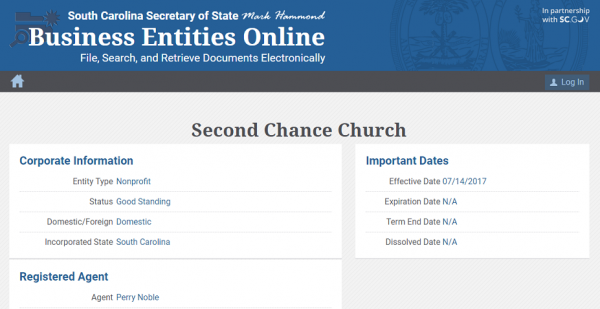 At the end of July, Noble posted a reflection after a year of being in recovery.  He described a bit about his experience since going into rehabilitation in Tucson, AZ. Curiously, he did not mention his wife or former church. Concerning his status with his former church NewSpring, he doesn’t seem to be getting a second chance there. The feud blew up into a public debate recently between the church and Noble. Noble accused the church of misrepresenting him and the church leadership said they had attempted to support Noble’s recovery.
No doubt, his return to more formal ministry will reignite conversation about how soon is too soon to return to vocational ministry after being forced to leave it.

There is at least one other Second Chance Church in the U.S. There is no obvious connection between the two entities.
Possible first sermon series in the new church: Get Back Up!

After the rehab experience, Noble entered the care of psychologist John Walker. From Noble’s Facebook page:

John Walker has been my therapist for around seven years now and I hold him in highest regard. In those seven years I’ve allowed him to speak into me; however, I am now humbly submitting myself to him and giving him authority over me as I believe he will serve as my pastor, my psychologist and my spiritual formations director in this next season.

UPDATE: A little while ago, NewSpring put up Noble’s and the church statement read in church this morning.
………………………
In a dramatic announcement this morning during the worship service, a representative from NewSpring told his congregation Perry Noble had disqualified himself from ministry due to excessive use of alcohol. The elders decided he should step down.
In a statement from Noble, he denied any sexual or domestic difficulties and indicated that he was receiving psychiatric care for his substance abuse.
Since early last week, Noble has been at the center of rumors of domestic problems including alcoholism and a difficult marriage. Watchkeep blog first reported that Noble had been fired. When I contacted NewSpring, Suzanne Swift, communications director, told me to tune in to the church service to hear an announcement from Noble and the church but did not deny that Noble had been fired. Then the Christian Post cited an anonymous source alleging problems with alcohol and Noble’s marriage.
Church sources steadfastly refused to comment and church members expressed sorrow and confusion over the news on social media. Some speculated that the rumors were generated by NewSpring as a hoax or gimmick. Many members on social media pledged to stand by Noble and the church.
Part of Noble’s statement:
[youtube]https://youtu.be/tUGEEjAlghM[/youtube]
Audio of the elders’ statement saying that this process has taken place over the past several months and included marital issues.
[youtube]https://www.youtube.com/watch?v=4msfXCf8PuA[/youtube]
On Treatment
I hope Rev. Noble seeks help which doesn’t spiritualize the real medical issues implied in the statement. He said he is seeing a psychiatrist. We know that treatment can be effective along with social support. He is to be commended for seeking help.
Apparently, the church is going to provide for the family while Noble focuses on his recovery. To me, other than the goofy PR statement, the church seems to be taking a commendable path by relieving him of duties while providing for his needs and treatment (assuming it is appropriate treatment). Taking him out of ministry may relieve him of the pressure of feeling like he has to come back to ministry at all. For some people, certain jobs (in this case being a minister) may lead to cues and triggers which are hard to handle without resorting to addictive behavior. At the end of this, he may find he should go into something else.  I wish him the best.

Yesterday, Watchkeep Blog speculated that Anderson, SC megachurch NewSpring Church had fired pastor Perry Noble. Today, I emailed NewSpring Communications Director Suzanne Swift and ask if she could confirm or deny this report. She replied via email and said:

I would love to invite you to join us at church this Sunday to learn more from Perry and NewSpring Church. We will have services on Sunday at 9:15am, 11:15am, 4pm or 6pm at our Anderson Campus, located at 2940 Concord Road.

When I told her I couldn’t make it, she said I could watch the service at NewSpring.cc.
Apparently, local news outlets are on to something because South Carolina television station WYFF reported on a closed door leadership meeting today at the church. When asked by WYFF about the meeting, Swift gave the exact same answer to WYFF as she did to me and Watchkeep.
The lack of a denial seems odd but apparently the church wants people to tune in Sunday to find out.
Noble has faced friendly fire from his Southern Baptist peers and has been a consistent supporter of Mark Driscoll and in the face of criticism defended Driscoll’s appearance at his leadership conference in the Spring.