Les and Leslie Parrott are evangelical Seattle-based authors who specialize in marriage and relationship issues. They have written numerous books, some of which have made it to the New York Times Bestseller List. At least one of those books played a short, peripheral role in the drama that has been Mark Driscoll over the last couple of years. Let me explain.
The Parrotts, like David Jeremiah (who I wrote about yesterday), have worked with Kevin Small, the CEO of ResultSource, in their publishing business. One of things ResultSource does is to conduct Bestseller Campaigns. In such a campaign, they literally guarantee an author that a book with show up on the New York Times Bestseller List or the consulting fee is refunded (see Mark Driscoll and Mars Hill’s contract with ResultSource). 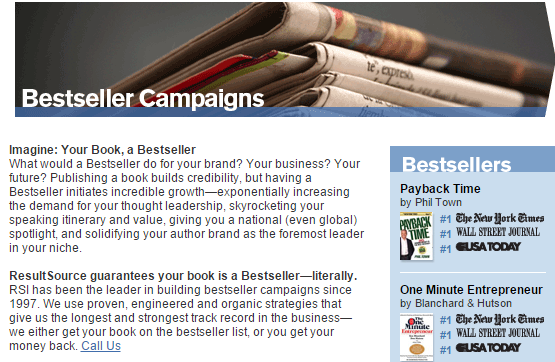 In other words Mars Hill Church: see what you have to look forward to by working with “Kevin and his company.”
The Parrotts’ book did indeed make #1 on the New York Times Bestseller List during the week of September 25, 2011. 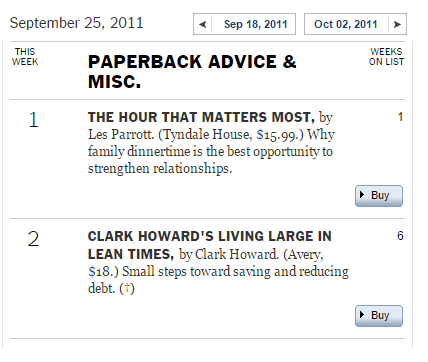 As sometimes happens with a campaign that games the system, the next week the book fell off the chart. ResultSource uses their many accounts to buy up books during a concentrated period of time. After that, if the book doesn’t continue selling, it drops off the chart.
The Parrotts have referred to Kevin Small as a part of their team and chair of their non-profit organization in previous books. I wrote the Parrotts last week and asked for comment. I also asked publisher of The Hour That Matters Most, Tyndale House, for comment about their part in the scheme. Initially, Tyndale House spokesman Todd Starowitz said last week he would have a comment for me, but nothing has come this week. I have written Sealy Yates and Kevin Small as well with no reply.
I also wrote the New York Times Bestseller List for comment. I wondered if they discovered that religious authors often manipulated sales figures. Danielle Rhoades-Ha, Director of Communications for the New York Times, replied that authors of many types of books engage in such tactics, and explained that “attempts to manipulate our rankings with falsified sales or strategic orchestrated schemes often through legitimate bookstores are by no means limited to books that offer religious and spiritual guidance.”
According to Rhoades-Ha, companies like ResultSource are on the Times’ radar:

In response, we have developed a system to detect anomalies and patterns that are typical of attempts to gain a false ranking and warrant further inquiry. We know which publishers are the most likely to attempt such things. We know what tools they use and with whom — which organizations, special interest web sites, “consultants” and shady order fulfillment houses and retailers — they tend to collaborate.

Given the language used by Ms. Rhoades-Ha, I don’t think the Times approves of these schemes:

Pirate plots abound wherever books can be purchased in bulk through affiliated organizational or corporate funds, churches or political action committees. Other red flags include large anonymous online bulk sales and e-book sales (which do not require traditional inventory accountability) and events and conferences that “give out” books but actually record the book sales as part of the ticket price.

She said that the Times reserves the right to keep titles off the list if they don’t meet their standards and they use a dagger symbol “as a signal to readers that the book attains its ranking largely but not exclusively from bulk purchases.” She added that they attempt to spot those who try to manipulate their rankings.
Tomorrow I examine the ethics of manipulating books sales. I have comments from a Christian publisher and various views on the subject.

During the week of October 21, 2012, David Jeremiah’s book God Loves You debuted at #5 on the New York Times Hardcover and Advice Bestseller List. It remained on the list for four weeks falling off the list during the week of November 18. In the Acknowledgments section of the book, Jeremiah credited ResultSource CEO, Kevin Small, for being the genius behind the plan to get the book “before as many readers as possible.” 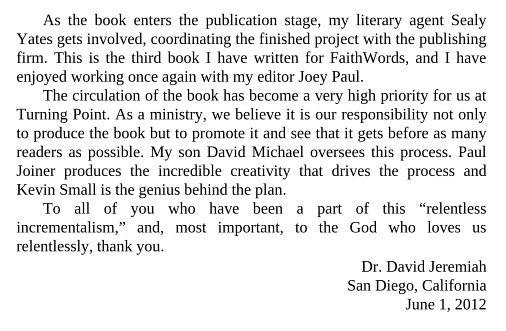 As we now know, in the case of former Mars Hill pastor Mark Driscoll, working with Small to market his book meant buying his way on to the bestseller list. Mars Hill’s contract with ResultSource called for the purchase of thousands of books in ways that made it appear that the books were being purchased by individuals. Did David Jeremiah, his church, or his Turning Point ministry make a similar arrangement? I asked Turning Point three times about this beginning early last week but received no answer.
According to an internal Mars Hill Church memo on ResultSource I have obtained, ResultSource CEO Kevin Small outlined the details of the preparation for a New York Times Bestseller campaign to Mars Hill Church’s executive elders in June 2011. One part of the strategy was to set up a website to solicit donations in exchange for a book. The pitch in the case of Real Marriage was that the Mars Hill Church member could donate over $25 to get a free book with any profits going to the church. However, since the books had to be purchased at retail, not much actual profit went to the church. Mark Driscoll’s staff warned about how it would look if the ResultSource deal was ever discovered.
According to the same memo, Kevin Small told Mars Hill executive elders that he would contact Turning Point’s* Paul Joiner to “provide the insight into constructing a donor campaign that will result in a higher donation than book cost.” Mars Hill constructed such a donor campaign, even though, according to insiders, very few donations were made which meant that many books had to be purchased by Mars Hill at retail cost via ResultSource. Since Kevin Small called on Joiner to help Driscoll with a bestseller campaign, Joiner apparently has experience doing it. David Jeremiah credited Joiner with “incredible creativity” to drive the process, and Small, who Jeremiah has worked with since at least 2006, with the “genius behind the plan.”
An unanswered question is: What was the plan? We know what Driscoll did; did Jeremiah do the same thing? He hasn’t answered.
I have obtained information which indicates that other Christian authors have used ResultSource to crack the NYT list. I will post more on this topic throughout the week. I also have reaction from a Christian publisher and the New York Times.
*Turning Point is David Jeremiah’s broadcast ministry.
(An earlier version of this post was published by mistake. I regret the confusion)