The New York Times told me this morning that Ted Cruz’s book could make the best seller list next reporting period if sales warrant. The paper also stands behind the claim that “the overwhelming preponderance of evidence was that sales were limited to strategic bulk purchases.”
Times spokeswoman Denise Rhoades Ha said this morning that “The book could appear on a future list. Every week is a new sales reporting period and could have a different outcome.” Thus, if strong sales have resulted from this dust up with the Times, Cruz might find himself on the list next week.
The Times won’t release or discuss their evidence because those details might lead to further manipulation of the list.  Ms. Rhodes Ha added that the Times stands by their comment on the matter released earlier:

We have uniform standards that we apply to our best seller list, which includes an analysis of book sales that goes beyond simply the number of books sold.
This book didn’t meet that standard this week.
Our goal is that the list reflect authentic best sellers so we look at and analyze not just numbers, but patterns of sales for every book.
In the case of this book, the overwhelming preponderance of evidence was that sales were limited to strategic bulk purchases.

I also contacted HarperCollins earlier today and asked if the company planned to release evidence which would support Cruz’s denial. HC has not replied as yet. Publishers are aware of where bulk orders go and could provide relevance evidence on bulk sales or lack thereof. Last Friday, a HarperCollins’ spokeswoman said the company found no evidence of bulk orders.
See my post from yesterday for more background.

HarperCollins has been around this block before.
According to Politico, the New York Times informed HarperCollins that Ted Cruz’s new book won’t be on the best seller list because the reported sales didn’t meet the Times “standards.”
Clarifying, the Times rep Eileen Murphy told Politico that bulk sales kept Cruz’s book off the list.
I asked Times spokeswoman Denise Rhoades Ha if the Times might go back and remove some best sellers now that we know that the authors used strategic sales to elevated their position and she declined to comment.  I have reported on several such books and authors including Mark Driscoll, Les and Leslie Parrott, and David Jeremiah.
Although they won’t say, I speculate that the attention given to the scams perpetrated by Christian authors in the wake of Mark Driscoll’s discovery may have made the Times tighten up their review of sales.
UPDATE: Coming late to this story, I didn’t realize Cruz and the publisher have denied the allegations.  Cruz wants to see the evidence.
H/t to this tweet and this one.

By now, most people know that Mars Hill Church entered into a contract with ResultSource Inc. to place Mark and Grace Driscoll’s book Real Marriage on to the New York Times Best Seller List. World Magazine broke that story and then I posted the contract between MHC and RSI. Overlooked in the fallout from that story is that Real Marriage also made it on other best seller lists. According to the contract, this was by design.

Note that RSI pledged to attempt to Real Marriage on best seller lists published by the Wall Street Journal and the USA Today. 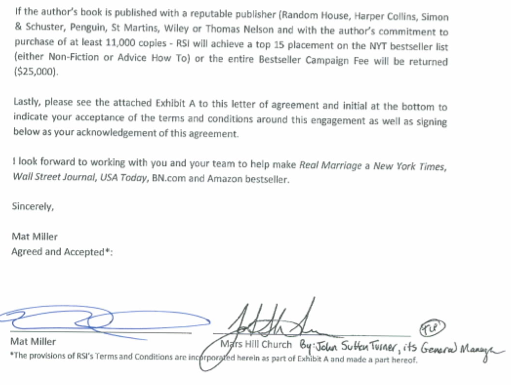 Although RSI was only obligated to make a top 15 placement on the NYT list, the other publications were mentioned as targets with expectation for success.
Initially the position of Mars Hill Church through spokesman Justin Dean was that the RSI-MHC partnership was an “opportunity” and an “investment.” Two days later, the MHC Board of Advisors and Accountability said the arrangement was “common” but “unwise.” Then, days later, Mark Driscoll said he initially saw the scheme as a way to market books but had come to see it as “manipulating a book sales reporting system” and thus “wrong.” He also said he was going to ask his publisher not to use the “#1 best seller status” on future publications. Quickly, the designation came off of his Mars Hill bio.
But what about the other best seller lists? Did he make those as well?
Consistent with the aspirations expressed in the contract, Real Marriage did make other best seller lists in early January and then as with the NYT list, the book fell off those lists after the campaign was complete. The book went to #3 on Publisher’s Weekly list, #8 on Wall Street Journal’s Nonfiction Combined list (week ending Jan. 8), and #38 on USA Today’s Top 150 Books (entered the list Jan. 12 for one week).  In contrast to his stance on the NYTs list, Driscoll continues to refer to those lists on his website:

At one point, this list also carried the #1 NYT best seller designation, so someone edited the page and decided to leave these placements alone.* Although the NYT best selling designation is more prestigious, another look at the contract demonstrates that the RSI scheme manipulates the efforts of several respected publications to estimate customer interest in books.

*Although these links are probably dead on arrival, there are multiple places on pastormark.tv where the NYT designation is still in place.
UPDATE: All links to pastormark.tv are now dead. I have copies of the pages but the current links go to a page that says, “We couldn’t find that.”