This just came out last night from Ministry Watch: 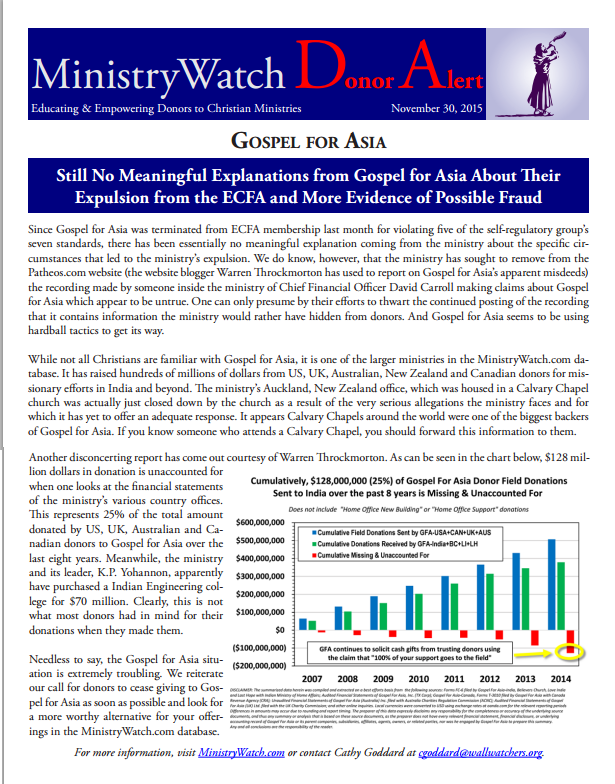 The alert is concise and raises questions about GFA’s silence. The alert also raises concern about efforts to cover up important information for donors about GFA’s explanations of cash smuggling.

Rusty Leonard at Ministry Watch today issued the following statement on his website (see also ECFA’s statement which is included below):

Gospel For Asia Expelled from ECFA – Donors Should Cease Donations
The self-regulatory body for Christian ministries, the Evangelical Counsel for Financial Accountability (ECFA) late Friday announced Gospel for Asia (GFA) had been expelled from the group for violating most of its Seven Standards of Responsible Stewardship all members commit to uphold. Clearly, there has been extensive problems uncovered at the ministry as a result of an audit/review of GFA’s operations starting in June 2015 and concluding on October 2, 2015. GFA had been a founding member of the ECFA and thus a member for the past 36 years. DONORS TO GOSPEL FOR ASIA SHOULD IMMEDIATELY CEASE MAKING DONATIONS TO THE MINISTRY. While the ECFA did not disclose the exact nature of the violations, it is clear they are very serious. We encourage the ECFA to change its policy of not revealing the specifics of its findings in cases like this as donors who gave their hard earned money to the ministry deserve to know what happened.
Blogger Warren Throckmorton has been writing extensively about suspect actions at GFA for some time and deserves full credit for causing the ECFA to investigate GFA more closely. How the wide range of problems at GFA had escaped the ECFA’s notice over the years remains an open question. While the ECFA announcement failed to address any specific problems at GFA, in line with their usual practice, Throckmorton’s blog had raised concerns about finances and governance among other potential problems. Interested donors should visit Throckmorton’s blog to read his many posts regarding GFA at https://www.wthrockmorton.com/2015/10/04/what-termination-from-ecfa-means-for-gospel-for-asia/.
Here is the text of the ECFA’s brief announcement:
Statement from ECFA on Gospel for Asia
On June 10, 2015, ECFA began formally reviewing member organization Gospel for Asia for compliance issues. The review concluded on Oct. 2, 2015 when ECFA’s board voted to terminate the organization’s membership for violation of the following standards: 2, 3, 4, 6, 7.1 and 7.2. This ends Gospel for Asia’s 36-yearlong status as an ECFA member.
ECFA enhances public trust in Christian churches and ministries by establishing and applying Seven Standards of Responsible Stewardship™ to review and accredit organizations. These standards are biblical and are fundamental to operating with integrity. ECFA uses a pass or fail concept in applying the standards rather than a rating system.
Rusty Leonard, CFA
Founder & CEO