Just a bit ago in the member’s weekly email, Mars Hill Church Board of Advisors and Accountability responded to today’s news that the church had been removed from the Acts 29 Network.

Update from the Board of Advisors & Accountability

Earlier today our board chairman, as well as many of our other pastors, received a letter from Matt Chandler, the president of Acts 29. The letter notified us that the board of Acts 29 has removed Pastor Mark and Mars Hill from membership in the Acts 29 church planting network. Our board responded to the letter with the following update to our elders, and we wanted to share it with you as well.

I told the lead pastors at the recent annual retreat that we are making real progress in addressing the serious reconciliation and unhealthy culture issues that have been a part of Mars Hill Church for way too long. And we are. I also told them that more opposition would undoubtedly be coming, and it has. Friendly fire always hurts the most.

I have never in my life spoken with Matt Chandler or any of the A29 board members for that matter (except Darrin Patrick, once about 4 years ago as part of Pastor Mark’s employment review process which he used to be a part of). In addition, no one from Acts 29 contacted Larry Osborne of our board prior to this decision. And perhaps most significantly, Pastor Mark was not personally contacted by the A29 board prior to receiving this announcement.

So I am not quite sure what Matt means by “leaning on the board to take the lead in dealing with this matter.” Be assured of this, the formal charges that were filed were serious, were taken seriously and were not dismissed by the board lightly. There is clear evidence that the attitudes and behaviors attributed to Mark in the charges are not a part and have not been a part of Mark’s life for some time now.

Our board’s decision is final regarding these charges, although will no doubt continue to be played out in the courts of public opinion. Again, I am deeply saddened that the A29 board would make such a decisive and divisive conclusion without speaking directly to the board or Mark prior to their public announcement.

My counsel to you is to not become bitter or angry. Continue to pray for all involved. Continue to love and lead the people God has brought to your churches. They need a pastor right now and God has given them you!

Michael Van Skaik
Chairman, Board of Advisors and Accountability
Larry Osborne
Board Member

The two remaining independent members of the Board of Advisors and Accountability signed this communication. For some reason, the executive elders did not sign it. They are also on the BOAA.  The other two independent members, Paul Tripp and James MacDonald recently resigned (although it is not actually clear when they resigned). Perhaps they saw this coming. Perhaps the departed BOAA members had been in communication with Acts 29; the letter above only mentions Osborne, Van Skaik and Driscoll.

There is something else puzzling to me about this letter. Note that chairman Van Skaik denies the concerns expressed by the Acts 29 board:

There is clear evidence that the attitudes and behaviors attributed to Mark in the charges are not a part and have not been a part of Mark’s life for some time now.

But in an early part of the letter, Van Skaik describes the culture at Mars Hill in negative terms.

I told the lead pastors at the recent annual retreat that we are making real progress in addressing the serious reconciliation and unhealthy culture issues that have been a part of Mars Hill Church for way too long.

It seems like Van Skaik wants to claim that problems are being worked on but that there really aren’t any problems. The problems have been in place “for way too long” but they haven’t been a problem “for some time now.” It is hard to understand how the board can find that there is nothing to the charges when in fact they are working to correct a problem that has been in place for “too long.”

Brief note to give credit where credit is due.
On June 8, Matthew a commenter on one of my posts about Mars Hill Global noted that Mars Hill claimed to translate the Bible into Amharic. However, as Matthew noted, there are already good translations of the Bible in Amharic. I wondered if the claim was used to make it appear that more was being done than actually happened. Translation is a major undertaking, much more involved than printing an established translation.
The Mars Hill folks must read the blog because the reference to translation has been altered. In fact, there is an explanation given. This deserves a positive mention. Instead of simply removing the page as has been done in the past with embarrassing information, the Mars Hill folks corrected the error and provided an explanation.
The page used to say:

We have also had the privilege to translate the Bible into Amharic, Ethiopia’s native language. What a blessing it was for Mars Hill Global to be able to give away 1000 Amharic Bibles to brothers and sisters across the world.

This looks like a deliberately misleading statement. However, this statement has been changed on the page now:

Note the explanation just above. In my experience writing about Mars Hill, such corrections are infrequent. Often pages just disappear. However, in this case, they provided the correct information and provided an explanation so that people who consult this page will understand the change. Well done.
Now Mars Hill, how about telling us where the Global Fund went? 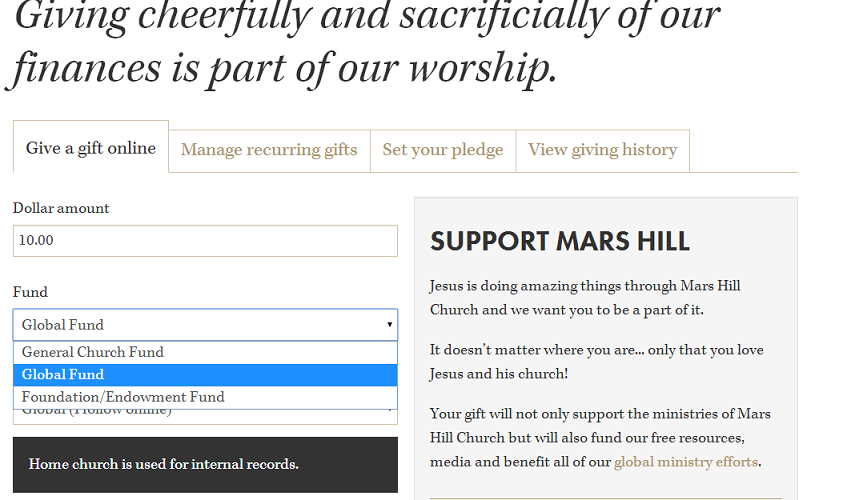