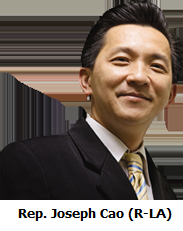 conservative Family Research Council to run ads attacking him just prior to last week’s election. The first Vietnamese American to serve in Congress, Rep. Joseph Cao (R-LA) was unseated last week by pro-choice Cedric Richmond. Rep. Cao, who has a solid pro-life voting record, was attacked by the Family Research Council on conservative talk radio due to his votes in favor of including sexual orientation in hate crimes law and his support for repealing the military ban on gays serving openly.

About the ads, Rep. Cao told me late yesterday:

For a conservative Christian organization to attack a Republican pro-life candidate in a general election is as ignorant as it is inexcusable.

The New Orleans Times-Picayune reported last week that FRC bought ads on the conservative talk radio station WRNO, known locally as “Rush Radio” due to the conservative nature of the programming. The ad attacked Cao’s votes on gay issues, saying his record “places your personal liberties at jeopardy.”

Several pro-life activists I spoke with declined to comment. The National Right to Life Committee did not respond to several requests. However, one pro-life activist denounced FRC’s actions. Psychologist Rachel MacNair, Vice-President of Consistent Life, a pro-life think tank, told me that

FRC sabotaged the pro-life cause — not just in losing a vote in Congress, but in the far deeper matter of public persuasion for the ultimate goal of making abortion unthinkable.

Can you be pro-life and moderate or supportive on gay issues? Public opinion polls show that the public is become more moderate on gay issues while growing more negative toward abortion.  If these trends continue, pro-life political groups may need to decide which social issue is more important to them. In the case of Rep. Cao, FRC’s anti-gay sentiment trumped support for a pro-life Congressman, one FRC endorsed in 2008.

First, FRC Action is not a Republican organization. We are a conservative Christian organization that advocates for the family based upon biblical values and truths.  Many of the problems we face today in America are the result of Republican leadership.

When Cao first ran in 2008, he sought my support and promised to be a conservative, morally based vote for the family.  I endorsed him in that race and because of the unique situation with Jefferson under indictment and no other viable Democrat in the race, Cao won.  In the last two years he has amassed one of the worst voting records of any Republican in Congress on our issues.  By the way, the homosexual community masquerading as Republicans in New Orleans decried our ad against Cao because he was pro-life.  Cao was at best a pro-life vote, under pressure.

Cao was the lone Republican who voted for the government takeover of healthcare when it first passed the House.  A lot of time and energy was spent on getting him to vote against the measure when it came back to the House from the Senate with taxpayer funding of abortion included.  It he was truly pro-life, he would have been leading the charge against President Obama’s plan; instead he was meeting with him in the White House.  Secondly, we are not a single issue organization that only focuses on the life issue.  We look at where Members stand on life, marriage, family and religious liberty.  Cao’s score on FRC Action’s vote scorecard was 62, lowest of the Louisiana House delegation.  His score was lower than Charlie Melancon, the one Louisiana Democrat in the House.

For his part, Congressman Cao disputes aspects of Perkin’s account. According to Taylor Henry, Communications Director for Rep. Cao, the Congressman “did not personally solicit the endorsement of FRC.” In fact, Henry told me, “Congressman Cao does not recall ever meeting Tony Perkins” and he “did not make any promises to Perkins.” Henry said he cannot speak for the 2008 campaign staff so there may have been some contact at that time but Congressman Cao made no personal commitments to vote with the FRC.

Regarding his votes on hate crimes and Don’t Ask, Don’t Tell, Henry said Congressman Cao voted in keeping with his views that gay people should receive equal protection under the law.

See also FrumForum on this story.