When Glenn Beck spoke at Liberty University in April of this year, many alums and other observers were upset that Beck preached a sermon including Latter Day Saint theological concepts. The school and Beck eventually responded to but did not agree with the concerns. Beck was especially bothered and engaged name-calling to defend himself. In addition to the odd pairing of LDS Beck preaching about his religious calling at a Baptist university, Beck’s history caught my eye. In prior posts, I addressed the accuracy of his claims regarding WWII and those who wore the purple triangle in Nazi concentration camps, the Salem witch trials, and the Bibles of British and French monarchs. In this post, I want to address what Beck said about Joseph Smith. In his speech, Beck said at about 15:56 into the video:

Days before Joseph Smith was martyred he was taken out by the sheriff.
They tried to tar and feather him several times. He was taken out by the sheriff and the last time they took him, they said you owe two hundred dollars, I think twenty-five dollars, twenty-five dollars. He said, ‘I don’t owe a man anything.’ He said, ‘No you stole a stove.’ One of the most ridiculous charges I have ever heard. At that time he reached into his pocket and pulled out his pocket watch. This is his pocket watch that he pulled out. He gave it to the sheriff and said, ‘I owe man nothing.’ They let him go and they killed him. But on the warrant for his arrest, he wrote on the back of his warrant to his people, ‘Put down your guns, no matter what happens, put down your guns. Put down your guns and trust in the Lord.’

Beck is correct that Joseph Smith was accused of not paying for a stove. However, the incident did not take place “days before” Smith was martyred. Instead, Smith was served a warrant on July 27, 1837 (Smith was killed in 1844) to recover the cost of a cooking stove which Smith was trying out. In volume 2 of the History of the Church, page 502, the words of Smith are recorded:

Thursday, 27 [July 1837].–I started from Kirtland in company with Elders Rigdon and Marsh for the purpose of visiting the Saints in Canada. Brother Rockwood on his return home, Elder Brigham Young on a mission to the eastern cities, started with us. When we arrived at Painsville we were detained all day by malicious and vexatious law suits. About sun-set I got into my carriage to return home to Kirtland; at this moment the sheriff sprang into the carriage, seized my lines, and served another writ on me, which was sworn out by a man who had a few weeks previously brought a new fashioned cooking stove to Kirtland, and prevailed on me to put it up in my kitchen, saying it would give credit to his stove, wishing to have it tested by our people; and now he thought would be a good time to get pay for it. I gave my watch to the officer for security and we all returned home.

So the story is correct but incorrectly linked to his martyrdom. The two events have nothing to do with each other.
There are some problems with Beck’s version of Smith’s martyrdom as well. Beck said that Smith signed an arrest warrant with a call upon his followers to “put down their guns and trust the Lord.” There is a historical basis for the story but Beck adds details which make the story misleading. On the trip to Carthage, IL on June 25, 1844, Joseph Smith’s party stopped at the farm of Albert Fellows. On page 555 of volume 6 of the History of the Church, an account is given of an order from the governor regarding the Mormons at Nauvoo:

The company made a halt, when Joseph, Hyrum and several others went into [Albert] Fellows’ house with Captain Dunn, who presented an order from Governor Ford for all the state arms in possession of the Nauvoo Legion, which Joseph immediately countersigned.

The Nauvoo Legion was a militia sanctioned by the state of IL and commanded by Joseph Smith. In Nauvoo on June 10, 1844, at the direction of the Nauvoo City Council, the Legion had destroyed a newspaper which was critical of the Latter Day Saints and declared martial law. Subsequently, Smith and some of his followers were charged with unlawfully destroying the press and his arrest was sought. Furthermore, Governor Ford sought to relieve the militia of their government supplied arms. After evading capture, Smith and several followers surrendered supposedly to be placed in protective custody. On June 27, 1844, Smith was killed in a shoot out with a mob who broke into the jail where he was being held.
Back to the note presented by Captain Dunn. The note was an June 24 order from Ford which read:

You are hereby ordered to comply strictly and without delay with the within order of the commander in chief, Gov. Thomas Ford.

Here is a copy of the document which is in LDS church possession: 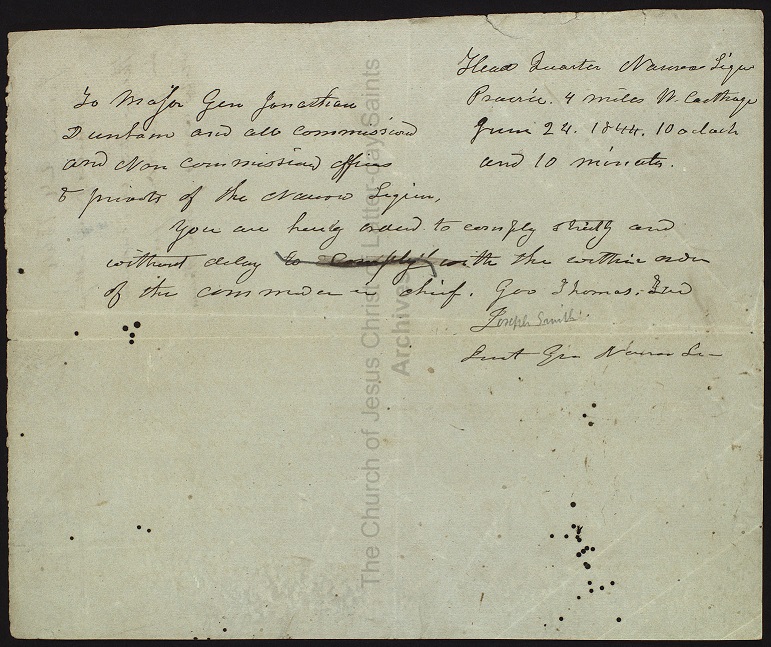 According the church history, Smith signed the document but did not write any message to his followers.
In contrast to a message of putting down arms, one Nauvoo Legion member said Smith had given an order to the Nauvoo militia to rescue him but the Jonathan Dunham, the commander, did not heed the order.

And while they were in jail, Brother Joseph wrote an official order to Jonathan Dunham to bring the Legion and reserve him from being killed, but Dunham did not let a single man or mortal know that he had received such orders, and we were kept in the city under arms, not knowing but all was well, until the mob came and forced the prison and slew Joseph and Hyrum Smith and wounded John Taylor severely.

As it turns out, a supporter smuggled in a hand gun to Smith in the jail where he was being held. When the mob stormed the jail, Smith was killed in a shoot out. It doesn’t seem reasonable for him to write what Beck said when he did not completely honor that sentiment himself by giving an order to bring the militia or by having his own weapon. No church source I can find has the quote used by Beck. If Beck has a primary source for that quote, he should make it available.
None of these accounts provide any justification for the martyrdom of the Smiths or for the discrimination demonstrated toward those of LDS faith. The point is only accuracy and fact checking. As with the other claims made at Liberty University, this story had its share of problems as well.
I want to thank a representative of the FairMormon.org website, who helped me put this together. I also consulted the various LDS documents noted above as well as some other LDS sources who wish to remain anonymous.