Last week I wrote about Glenn Beck’s recent sermon at Liberty University. In that post, I pointed out that Beck referred to the colored cloth triangles that the Nazis made concentration camp inmates wear to identify the reason for imprisonment. The last triangle he displayed to his audience was a purple triangle (Watch the entire video here, for the purple triangle segment start at 10 minutes into the video). 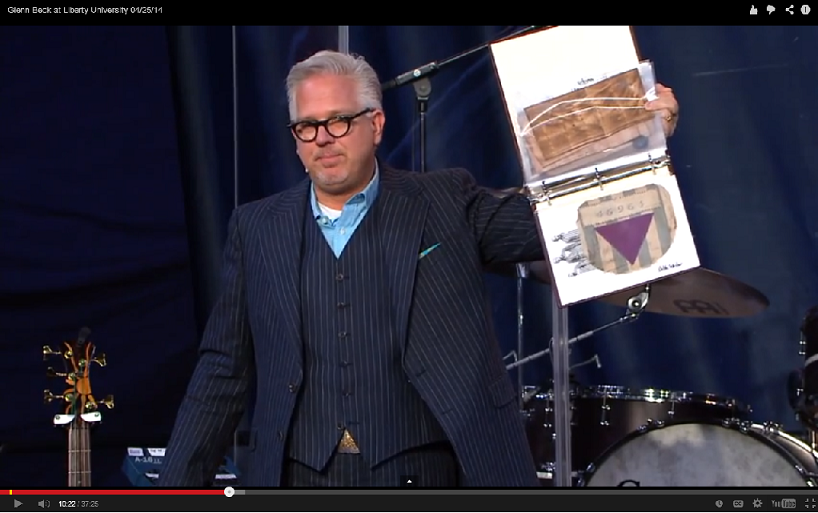 Here is what Beck said about the prisoners wearing the purple triangles:

what got you sent to the concentration camps for the purple triangle? You were a Bible scholar. The Bible is the enemy to fascists.

As I pointed out in the post last week, Beck misled his audience. Bible scholars were not imprisoned unless they challenged the Nazi party. While all felt the scrutiny of the government, Bible scholars were not imprisoned simply for studying or believing the Bible. In fact, the overwhelming number of purple triangle wearers were Jehovah’s Witnesses. They refused to salute Hitler and paid a heavy price for it.
A little additional reading makes Beck’s misinformation particularly troubling. Beck’s religious group, the Mormons, was tolerated by the Nazis, mainly suffering local intimidation but little, if any, national persecution.  Based on the Twelfth Article of Faith, the Mormons’ policy toward the Nazis was to accommodate them. The LDS church in Germany disbanded their youth group without resistance at the order of the Nazis. The Mormon basketball ministry team helped the German team during the 1936 Olympics. Although later vindicated, the church even excommunicated one Mormon youth who was executed for carrying out anti-Nazi activities.
In early 1933, the activities and literature of the Jehovah’s Witnesses were banned by the Nazis. Some JWs were sent to the early concentration camps that year.  On the other hand, in December 1933, The Deseret News, a Mormon paper, published an article (scroll across to pp. 19 & 22; also here) lauding Hitler and the Nazis. 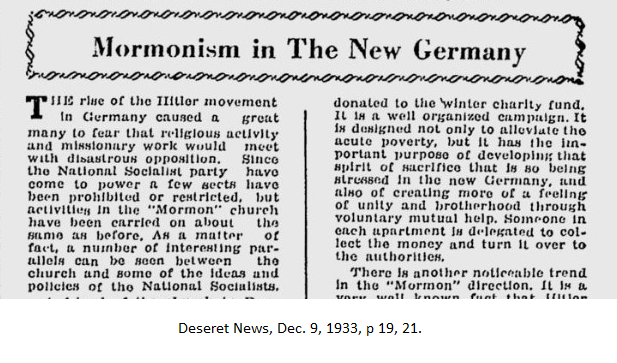 Note the reference to banned sects in the paragraph above:

Since the National Socialist party have come to power a few sects have been prohibited or restricted, but activities in the “Mormon” church have been carried on about the same as before. As a matter of fact, a number of interesting parallels can be seen between the church and some of the ideas and policies of the National Socialists.

At least one of the banned sects was the JWs. While the Witnesses were getting a purple triangle, the Mormons were finding common ground with the Nazis.
The Nazis eventually became suspicious of the Mormons, but along the way, the church and the National Socialists worked together. For instance, members of the Mormon basketball team, formed to proselytize, found favor in the eyes of the Nazis who called upon them to help with the German national team. 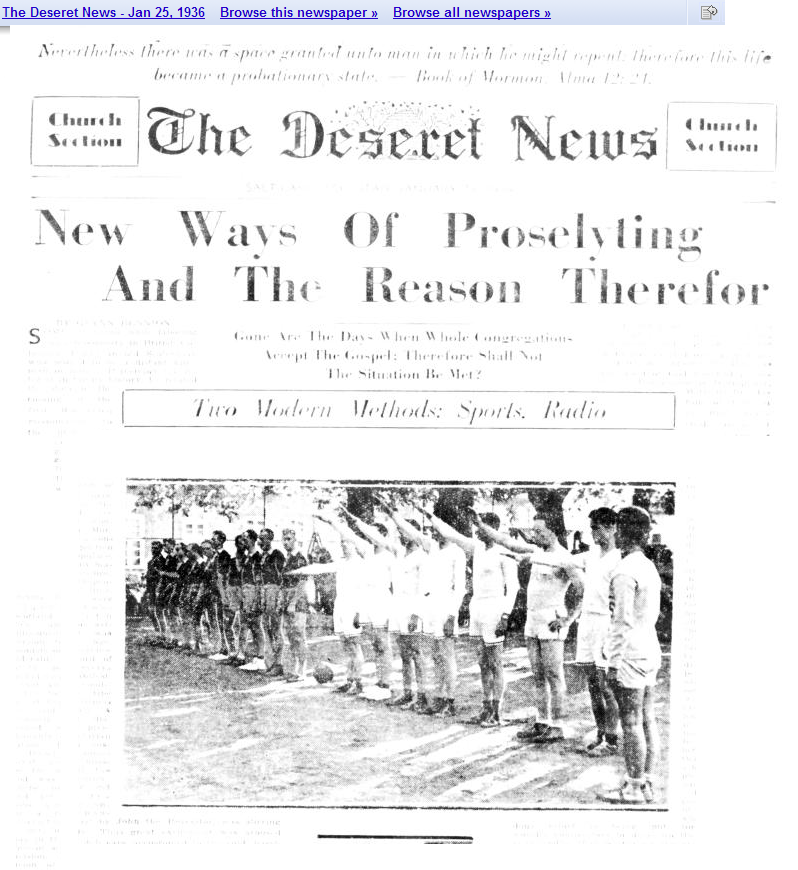 Mormon basketball team giving the Nazi Sieg Heil salute.
LDS Scholars Alan Keele and Douglas Tobler documented the Mormon tolerance of the Nazis in a 1980 article titled The Fuhrer’s New Clothes. In it, the scholars note that the Mormon leadership as well as individual Mormons tolerated and in some cases embraced the Nazis. In 1939, a LDS official penned another article in praise of the Nazis. According to Keele and Tobler:

In their eagerness to coexist with the [Nazi] government, American officials of the German Church resorted to public relation efforts . . . Probably the clearest example of this tendency is an article by West German Mission President Alfred C. Rees entitled ‘In the Land of the Mormons.’ The article appeared in a special issue of the Nazi Party organ Der Volkische Beobachter dated April 14 1937. In the Editor’s Preface to the article, President Rees is called ‘the representative of the Church in Germany,’ who ‘paints for our readers a portrait of Mormonism today, a church which views the New Germany with sympathy and friendship.’ (p. 27, Fuhrer’s New Clothes).

Keele and Tobler also describe the fate of a young Mormon boy, Helmuth Hubener, who was executed by the Nazis for anti-government activities. The Branch President of the local Mormon church excommunicated him after his arrest. Even though the excommunication was not ratified by Mormon leaders in the United States, no one in Germany addressed the matter until after the war was over (Additional note: My original post said Hubener was excommunicated after his death. Instead the German LDS church action was taken after his arrest. After the war, in actions taken between 1946 and 1948, the local and then U.S. church reversed the excommunication. I am sorry for the original error.)
Glenn Beck told Liberty University that the Bible was the enemy of fascists. However, his own church put up little resistance to Nazi fascists. They did not wear the purple triangle. Without the whole story, it is unseemly for Beck to hold it up as a badge now.
UPDATE: In response to reader comments, let me add that Baptists (Liberty University is a Baptist school) were about the same as the Mormons. Baptists lauded Hitler in the 1930s because Hitler didn’t drink or smoke and because the Nazis campaigned for family values.  Beck’s grandstanding about resistance to fascism is pathetic when one considers the historical record of his religion and the religion of his audience.
Let me add that I am not saying I would have done any better than the Mormons or the Baptists. I would have wanted to protect my family and so I would have wanted to leave the country or do what I had to do to keep my family safe. In the face of evil, humans often wither with or without the Bible.
Additional sources:
The Rise of the Nazi Dictatorship and its Relationship with the Mormon Church in Germany, 1933–1939 – Steve Carter
Ernst C. Helmreich. The German Churches under Hitler: Background, Struggle and Epilogue. Detroit: Wayne State University Press, 1979. (see especially pp. 404-406)
(H/t to commenter DukeCanuck)
More on the historical errors in Beck sermon.