Comedian and CEO of Pathymnal Jeff Breakfast reveals the reasons for my recent demise.

Whatever it was, we know Warren did it, and that’s final. Okay—It’s not so much what he DID DO as what he DIDN’T DO. But hey, you didn’t hear it from me. Fine, you did—He DIDN’T SHUT HIS MOUTH is what. How dare he blow the whistle we gave him! Where I come from, If a “truthteller” keeps calling out fraud and injustice like some jackass, he’s bound to get a taste of fraud and injustice all right—homegrown style. Stings like a really large amount of bees, don’t it? All of this is of course invisible and uninteresting to the public and as such, neither he nor anybody else will think to “sing” about our dubious dismissal in public.

Being from the Seattle area, the Rev. Breakfast has had things to say about Mark Driscoll before. And he has something to say about him here:

Say, speaking of which, how would you like to hear a spanking 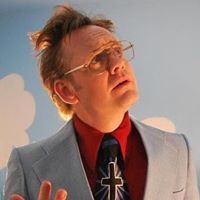 new hymn composed by Mark Driscoll? These sweet strains of praise from a former record company executive will fill your soul with the feeling that his new full-priced hymnal just might bridge the gap between you and God. We’ll just go ahead and start playing it three seconds ago and oops you are already listening to it so might as well not stop now. From his sharpie to your ears, don’t you just feel like it would be great if you tried to love it? After ten seconds you can click away it if you don’t have the faith of a mustard seed that your life or private parts could use an authoritarian man ordering them around.

So go read the rest of Rev. Breakfast’s explanation, it will bewilder and amuse.