The school that God asked Gateway Church pastor Robert Morris to host is having a rough patch. According to the most recent board of directors report, the school has lost three branch locations since 2015 and may close another (Olathe, KS) very soon.
Currently, on TKU’s website, Morris promotes the multi-campus model and claims that TKU will expand the number of locations by 2018.

The school boasts that plans call for “20 or more campuses worldwide by 2018.” However, a review of the recent board report paints a different picture. Most students attend the Southlake campus with significant declines in number of credit hours at most campus locations. Three locations have left TKU since 2015 (see the locations in dark grey below). 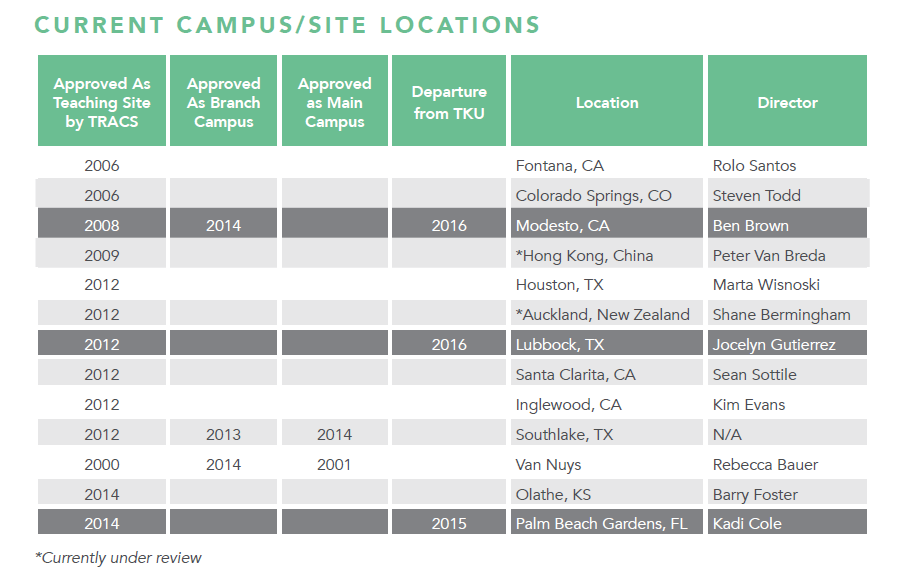 According to the report, no documentation exists for the Hong Kong campus and the NZ campus is under review. Olathe is being reviewed to determine if it is “feasible to continue.”
In the May 2016 president’s report, it is clear that the administrative staff want to move away from multiple campuses:

First, I (along with the administrative staff) have concluded that it would be in the school’s best interest to pivot away from the directive to establish teaching locations on (at least 30) mega-church campuses. The past three years have provided us with ample evidence to conclude that this labor intensive, complicated, expensive plan is not producing the kind of results we had hoped (see Teaching Locations Map on page 46).
Additionally, we have experienced some significant setbacks in our campus extension efforts. For instance, one year ago we were operating on 10 extension sites around the country with two other locations approved and preparing to launch. However, at the end of this academic year, for various reasons, we are positioned to go into the next academic year with only 7 sites in operation (none larger than 60 students) and neither “approved” location willing to move forward (see Teaching Locations Map on page 46).
Second, these “setbacks” have contributed to our resolve to pivot away from this campus expansion model and embrace instead a two-pronged strategy that emphasizes the intensifying efforts to build a healthy, dynamic home campus with over 1,000 resident student by 2022.

In the April 2016 executive committee minutes, one of four challenges was to change the multi-campus model.

With most campuses in decline, it hard to understand how TKU (or Gateway University as it will soon be known) gets to 20 campuses by 2018. In fact, it appears that the board is going to move away from that approach altogether because at least five of the campuses are stagnant and creating a drain on TKU’s limited resources.
To be fair to TKU, enrollment is up to 747 total students (502 FTE) which represents a 55% increase over five years. However, the promise of a growing multi-location system appears to have faded without prospective students’ knowledge.
Current students who cannot transfer may be left without a clear way forward. Since TKU is not regionally accredited, their credits won’t transfer to accredited schools.
I wonder if campus coordinators are aware that they will be closed down. The ethical thing to do would be to discourage any new enrollments since those students won’t have a future at the regional campus.
What this will probably mean for Gateway Church is a greater burden on their budget since the school now relies on a $1/year lease of facilities as well as cash donations to TKU. Since everything is moving to Southlake, the expenses for a residential campus will no doubt require a greater commitment from the church.

Robert Morris, the man who Jack Hayford jokingly said was the “4th member of the trinity,” acknowledged last Sunday morning that he used a ghostwriter to help him write his book on tithing. Watch:

Hayford also said God asked Morris if it would be all right for Hayford to move The King’s University to Gateway Church.
The book is The Blessed Life: The Simple Secret of Achieving Guaranteed Financial Results. According to the book description, this book is life changing.

This book will transform your life for the better, bringing you guaranteed financial results. But it will do more that that. It will change every area of your life: marriage, family, health and relationships. For when God changes your heart from selfishness to generosity, every part of your life-journey is affected. If all believers followed the practical guidance of this book, every church could be built, every nation would have an abundance of missionaries–and all would reap the benefits of having a generous heart. With humor, passion and charity, Robert Morris presents the secrets of living a blessed life both financially and spiritually.

I wonder how the guarantee can be triggered. If I do what it says (Give to the church), and I don’t get rich like Morris, will I get a refund? 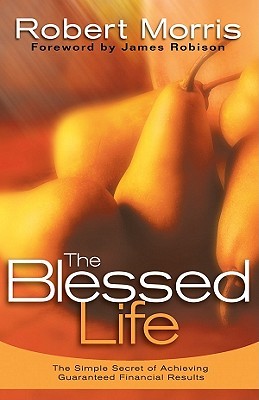 Perhaps, the guarantee was problematic in some way because the subtitle was changed to “Unlocking the Rewards of Generous Giving” in a subsequent edition. The book’s message is that God will bless you if you give to Him (meaning the church). Morris said in the video, he doesn’t teach “give to get” but rather “give to give.” This seems like a distinction without a difference to me. The bottom line, even if he doesn’t guarantee it, is that one is to give to the church with the expectation that you will get something from God in exchange.
Morris is certainly correct when he says he has been blessed financially. He has at least two homes, one in a resort are (Possum Kingdom Lake), and a slew of other blessings, according to those who are close to the church.

I have heard many things from megachurch pastors that made me do a double-take. The subject of this post ranks up near the top of the list. According to Apostolic elder Jack Hayford, God asked Morris if it would be all right for The King’s University to move to Gateway Church.  At Gateway’s First Conference going on now, Hayford made this claim. Watch:
[dailymotion]http://www.dailymotion.com/video/x2dz0jn_full-story-hayford-calls-morris-4th-member-of-trinity[/dailymotion]
According to Hayford (who Morris had just compared to the Apostle Paul), Morris wanted Hayford to relate the story:

Three weeks ago I was with the Lord in my morning time with Him and He said ‘Robert, if Pastor Jack asks you to have Gateway be the host site for the King’s University, would that be all right with you? And Robert said to me, ‘And I said to the Lord, yes.’

Hayford then called attention to the incredible claim that God asked Morris if the move would be all right by saying God had never asked Hayford for permission. He then joked that Morris was the 4th person of the Trinity.
Do you suppose the Lord called Jack Hayford, Pastor Jack? I wonder if He had a back up plan in case Morris said no. Apparently, Gateway is such a big deal that even God addresses the Apostolic elders as “pastor” and asks permission.