According the Sydney Morning Herald, Brian Houston announced that Mark Driscoll would no longer attend the Sydney conference later this month.
Brian Houston’s statement in full:

Statement from Pastor Brian Houston, Hillsong Church
June 2015
After personal interaction with Mark Driscoll today, we have agreed that he will no longer be coming to Australia or the UK to attend Hillsong Conference. It is my hope that Mark and I will be able to speak in person in the coming weeks to discuss some of the issues that have been raised, what – if anything – he has learned, and for me to understand better how he is progressing in both his personal and professional life.
The teachings of Christ are based on love and forgiveness, and I will not write off Mark as a person simply because of the things that people have said about him, a small minority of people signing a petition or statements he has made many years ago for which he has since repeatedly apologised.
However, I do not want unnecessary distractions during our conference, particularly as this 30 minute interview was only a small part of this five day event. It was clear to me that Mark’s attendance had the potential to divert attention from the real purpose of Hillsong Conference, which is to see people leave encouraged in their own spiritual journey.
Clearly Mark has held some views and made some statements that cannot be defended. One or two of the more outrageous things he is purported to have said, I have heard for the first time through the media exposure over the past week.

Driscoll’s picture is still on the conference website.
Houston does not emerge from this mess without suffering damage to his public image. It is beyond clear that this move was done to save face and was a reaction to the negative publicity. His statement seems full of contradiction. He will not write off Driscoll, he says, because of statements he made many years ago or a petition, but those are the exact reasons for the bad publicity in Australia.
He refers to the “outrageous things” Driscoll said as things Driscoll was “purported to have said.” However, earlier in the statement, Houston said  he wouldn’t write Driscoll off due to “statements he has made many years ago for which he has since repeatedly apologised.” If Rev. Houston is not even sure Driscoll made these outrageous statements, how does Houston know Driscoll has “repeatedly apologized” for them? All of this is very easy to verify and we now know that Houston and Driscoll talked. Are we to believe he didn’t ask Driscoll about it?
Video:

If he did say that? That is a stunning lack of homework Rev. Houston.

Not sure how long the statement has been there (update: apparently it was posted today) but it is dated June, 2015 and is revealing. Hillsong’s pastor Brian Houston reveals he doesn’t know Mark Driscoll very well but wants to ask him some questions in this high profile interview. Building on his earlier statement made to this blog, Houston said today:

Personal statement from Pastor Brian Houston – Re: Mark Driscoll
June 2015
Let me be clear about one thing. Mark Driscoll and I stand poles apart on women, their place in society, and their role in the Church.
Hillsong Church has a long history of involving women in every area of church life both on and off the platform, and my own wife Bobbie is my co-Senior Pastor.
I think our leadership styles and relationship with staff and key people have also been vastly different.
So why am I using our platform to interview Mark? We come from different backgrounds, theological positions, and church expressions. I genuinely want to know! Did he really say those things? Does he believe those things? Does he have any regrets? Has he been misrepresented? What has he learned and what can we all learn? And where to from here?
I have met Mark just twice. Before his very public resignation from Mars Hill Church, a mutual friend introduced us over a cup of coffee in Seattle. We talked about life, ministry, and his previous exposure to Australia. The second time, I was standing in line at Starbucks in California bleary eyed and jet lagged when another customer in the line said hi. It was Mark Driscoll and his daughter.
A lot has been said. There’s lessons to be learned. I’m looking forward to asking the questions and hearing from Mark directly. Will we agree afterwards or agree to disagree? Time will tell. I doubt we will agree on everything, but everyone deserves an opportunity to be heard.
Mark will not be speaking at the conference. It’s an open interview with Mark and his wife Grace. Let’s see what he has to say.
Blessings,
Brian

I think it is head scratcher that Brian Houston implies Mark Driscoll hasn’t had a chance to be heard. I wonder if Rev. Houston will then give the former Mars Hill folks some time and space to be heard.
The rationale is curious given the size and prominence of the conference in Australia. Most hosts do the exploration of these matters before a conference rather than live during it. Houston appears to be distancing himself from Driscoll even as he gives him an incredible platform to shape his comeback in the way he desires.
The statement may have been in response to this report on the Australian Broadcasting Network. Houston’s response to Driscoll’s views on gender appear to relate to this report.

With nearly 700 signers, Natalie Collins’ petition asking Hillsong to remove Mark Driscoll from the schedule of Hillsong’s London conference has taken off. However, Hillsong does not appear to be swayed by the action. In response to my request for comment about the petition, Hillsong spokesman Mark DeMoss replied:

Hillsong is aware of the petition. The whole point of keeping Mark (and Grace) Driscoll on the conference program is so Brian Houston can interview them about events of the past year.

Demoss, who once handled some PR duties for Driscoll and the former Mars Hill Church, added, “I don’t think that is ‘cheap grace,’ but rather, a thoughtful approach to challenging circumstances. I think it would be fair for the petitioners to judge this appearance after it takes place, but advance judgment seems premature and a bit unfair, in my view.”
Concerns expressed by Collins include:

This is both disappointing and of great concern to many across the UK and internationally.  Mark Driscoll resigned from leadership after many leaders and other within his church raised issues about unethical and abusive behaviour including:

For her part, Natalie Collins will continue to promote the petition, telling me that the statement is “disappointing” but that she plans to continue pressing the petition with Hillsong.
UPDATE: Ms. Collins added a fuller statement later in the afternoon:

Hillsong’s response is disappointing.  I appreciate they have “downgraded” Mark Driscoll’s contribution from a keynote speech to an interview alongside his wife Grace, however as Christians our focus should be on the broken hearted and the powerless, yet Hillsong have chosen to broadcast Driscoll’s voice.  None of those he has hurt will have their voice heard.  Clearly he has not made any significant progress in changing his behaviour, or he would have chosen to reject the Hillsong opportunity.  As it is, he is continuing to use power in a way that further damages those he has hurt and Hillsong are legitimising and colluding with this.  Some of those signing the petition are people who have been directly impacted by Mark Driscoll and Mars Hill and if this petition can offer an opportunity to people who have been damaged and silenced, then it is making a difference.  Hopefully Hillsong may reconsider, and if they do not, we may choose to peacefully protest at the conference itself.

Despite the unfinished business at Mars Hill Church, Mark Driscoll is still a featured speaker at Hillsong’s Sydney Australia conference next year.
A flyer given out in church last Sunday tells the tale. The brochure claims the conference will champion “the cause of local churches everywhere.” Everywhere except Seattle… 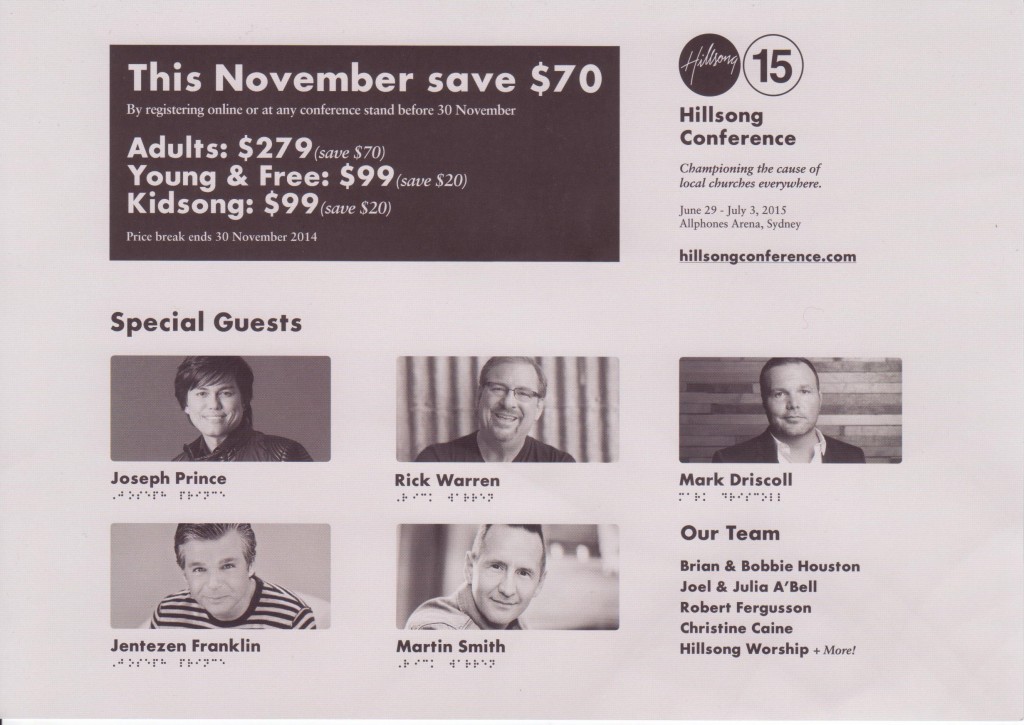