Richard Cohen, founding guru of the International Healing Foundation, just can’t quit the Unification Church.
Despite saying a bunch of times that he left the church, he and his staff just keep showing up on their agenda. Now he is doing one of his healing ex-gay workshops for Unificationists with Phillip Schanker, one of the chief Unificationists in the U.S., as host. Although not sponsored by the Family Federation, the workshop is hosted by Schanker and is being marketed to disciples of the late Sun Myung Moon.

This program is sponsored and hosted by Phillip Schanker, former director of the family department of the Unification Community in the USA. Our special guest facilitator is Richard Cohen, M.A., psychotherapist, author, and founder of the International Healing Foundation (IHF), who has helped thousands experience radical healing and freedom over the past 27 years. To learn more about IHF and Richard’s personal journey from homosexual to heterosexual, visit www.comingoutloved.com.
NOTE: This private retreat is intended for current or former Unificationists and their loved ones, but it is not sponsored by or affiliated with the FFWPU. To respect those who would prefer that your participation be confidential, your registration information will be known only to Phillip Schanker, and only registered participants will receive details about the location of the program.

This makes sense as Moon’s son endorses Cohen as the foremost expert in the church.
Despite claims that she left the church, IHF staffer Hilde Wiemann conducted workshops for the Unification Church in 2013.
In my opinion, the IHF bottom line is money. The source of it doesn’t much matter.
Richard Cohen in action. Wonder if there will be a special price on tennis racquets at the conference?
[youtube]http://youtu.be/VtGouVqsmsg[/youtube]
H/t: HWDYKYM

In 2007, parenting specialist at the International Healing Foundation Hilde Wiemann first denied, then admitted being involved in the Unification Church (Church of Sun Myung Moon who taught that he was the Messiah). Due to her involvement, the International Healing Foundation was briefly placed back on Steve Hassan’s list of Unificationist front groups.  IHF was originally placed on Hassan’s list because Cohen was once a member of the UC. IHF was removed when Wiemann recanted and declared the UC to be a “satanic, heretical cult.” IHF founder Richard Cohen initially denied Wiemann was a part of the church but later acknowledged her statement.
Apparently, Ms. Wiemann has changed her mind again. She recently presented a series of sessions along with long time UC member Pam Stein on behalf of the Women’s Federation for World Peace. The WFWP is a Unification Church entity headed by Angelika Selle. Selle pastors a UC church in MD and was appointed to her post as president of the American WFWP by none other than True Mother, Sun Myung Moon’s wife, Hak Ja Han Moon.
Ms. Wiemann has also changed her name. She now goes by Hilde Reinold in her non-IHF pursuits. Any doubt about her identity is dispelled by her Hilltop Retreat bio:

Hildegard Reinold grew up in a small town in Austria and came to the United States in 1982, where she married her husband, John Wiemann. John works hand-in-hand with Hilde as a massage therapist and Shiatsu specialist. John and Hilde have two sons and one daughter in their 20s, all happily married. Being a mother was and is the most important and fulfilling part of Hilde’s life.

IHF continues to partner with Reinold/Wiemann however, often using her Hilltop Retreat Center for their workshops. She is listed as Hilde Wiemann in the IHF literature but Hilde Reinold on the brochure promoting the UC workshop (note arrows pointing out the audience and the presenters): 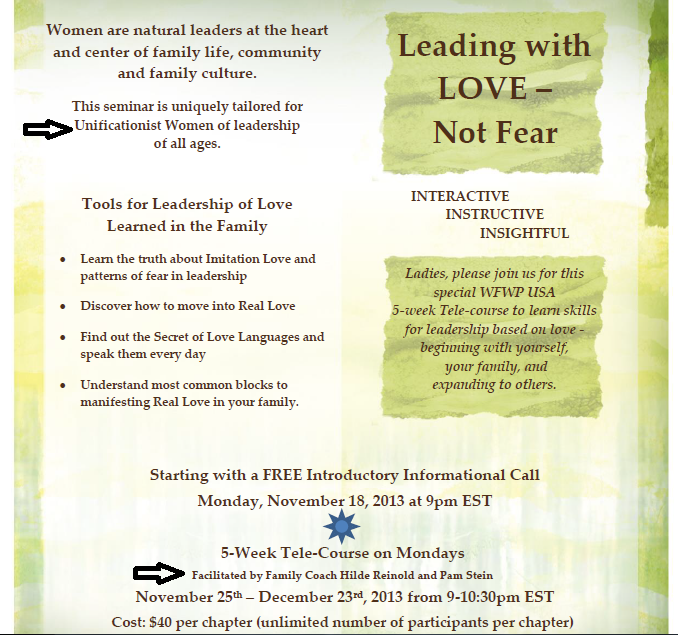 I addition to the tele-course, Rienold/Wiemann led a session for the WFWP in October as a part of their of their annual National Assembly. During this event, Reinold/Wiemann presented a break out session on leadership and was quoted extensively in the article.
Reinold/Wiemann is not a peripheral player at IHF. In IHF’s Winter, 2012 newsletter, Cohen lauded Wiemann as a “true sister” and said she is “intrinsically laced into the fabric of IHF.”
In October 2012, one of Moon’s sons, Hyung Jin Moon identified Richard Cohen as being in the UC movement and as the “foremost expert” on homosexuality in the UC. There was no comment at the time from Cohen.
For more on the UC, see this in depth New Republic report from Mariah Blake.