David Barton continues to mislead his audiences about HIV research. Earlier this year, he told Charis Bible College students that a vaccine won’t be discovered for HIV because the Bible teaches HIV is the penalty for being gay. Then he misrepresented two separate studies on HIV vaccines to make it appear vaccine research had been halted due to lack of success.
Barton did the same thing again Saturday, April 11th at the Faith Baptist Church in Knightdale, NC. He told the audience the Bible teaches that no HIV vaccine will be found and then he misrepresented two studies so that he could seem right. Watch:

If Barton is right, then why don’t all gays get HIV? And why is HIV a straight disease in countries other than the United States?
What I wrote in early March is still true about Barton’s claims. At about 1:56 into the clip above, Barton shows a headline touting the discovery of a HIV vaccine. Then he says, “six weeks later” another article came out saying the vaccine didn’t work. However, what he doesn’t tell his audience is that he is deceiving them. The first headline was about one study and the second headline was about another study conducted four years later. To Faith Baptist Church, Barton said essentially the same thing as he said at Charis Bible College. What I wrote then about the claims applies to this speech:

…Barton said he might be wrong because of a 2009 article in Popular Science with the headline: “For the First Time Ever, An HIV Vaccine Shows Success in Trial.” This was taken from the New York Times and is a report about the RV 144 vaccine trials, also known as the “Thai Trials” because the six-year study was conducted in Thailand. According to the NIH News, the trials began in 2003 and demonstrated safety and modest effectiveness. Barton implies that this trial was halted; it was not.

In the video, Barton first showed the Popular Science headline and then said:

The headlines came out and said, for the first time ever an HIV vaccine shows success in trial. Oh my gosh, I guess there is, I guess I must have misinterpreted the Bible, cause the Bible’s true, and then six weeks later, they came out with this that says, NIH halts trial of HIV vaccine after it fails to work. The newspaper said it worked but none of the medical evidence said that it worked. So they still don’t have a cure.

The problem with Barton’s presentation is that the second headline didn’t come out “six weeks later.” Rather it came out four years later in 2013 and was about an entirely different attempt to create a vaccine.

The Yahoo News article Barton referred to (the second headline – NIH Halts Trial of HIV Vaccine After it Fails to Work) is only available via Internet Archives and is dated April 26, 2013. The Yahoo article linked to a NIH announcement that the HVTN 505 clinical trial had been halted. The HVTN 505 trial results had nothing to do with the earlier success of RV144. The RV144 trial was reported in 2009, the same year that the HVTN 505 started. The NIH has more on the HVTN 505 trial on the NIH website.

Barton got the time frame wrong and made it appear that the two headlines were related to each other.

Barton’s use of the headlines is extremely deceptive. In fact, progress continues to be made which builds upon the modestly successful vaccine already available. In fact, R144 vaccine does offer protection from HIV infection. An extension of the success of R144 is being conducted in South Africa now.
It is hard to understand how Barton could make this mistake unless he either didn’t read the articles (just relied on the headlines but didn’t read the articles) or he is intentionally misleading people.

I am not sure what the promoters mean by “most recognized” but I think they mean it in a good way. Sorry, real Christian historians, to make you cringe but you all probably need to make some noise if you don’t like this. The promoter’s name, email and phone number are right there in the ad. 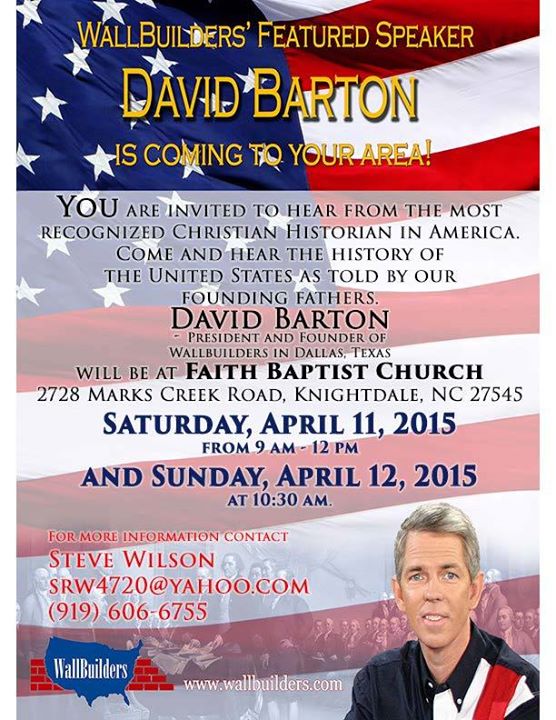 America’s historian probably wouldn’t tell people Simon & Schuster plans to publish a book when the publisher has no plans to do so. Such an historian would not make up a mythical college basketball career playing Division One NCAA college ball for a record-setting team.