Although dated, I have found this 2009 article on donor illusions to be helpful.  The article was published on the blog of the Give Well organization, a donor support group. Give Well publishes a recommended charity list each year. Here is 2016’s list.
The Give Well description of donor illusions focuses on international charities but illusions can be found in domestic charities as well (e.g., today’s post on coats for pledges at K-LOVE).

As a result, international charities tend to create “donor illusions” by implying that donations can be attributed more tangibly, reliably and specifically than they really are. Some charities are more purposefully misleading than others, and some have more prominent and clear disclosures than others, but we feel that all of the cases below end up misleading many donors.

The illusions illustrated in the post include loans to third world entrepreneurs, child sponsorship, and giving livestock to needy families.
Livestock Gifts
I have written about these in previous years as being a good example of a compelling illusion. Donors can easily sell the idea of giving an animal to a third world family to Sunday school classes or church groups. The marketing certainly creates that illusion. Check out World Vision’s 2016 catalog. 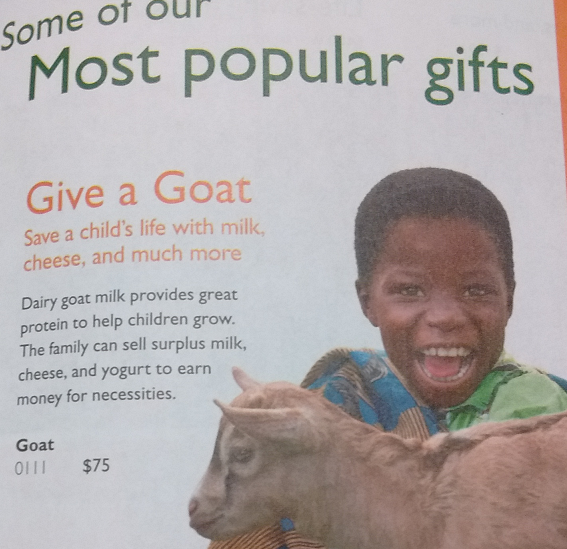 Here is what World Vision says about the gifts in the new Christmas catalog. 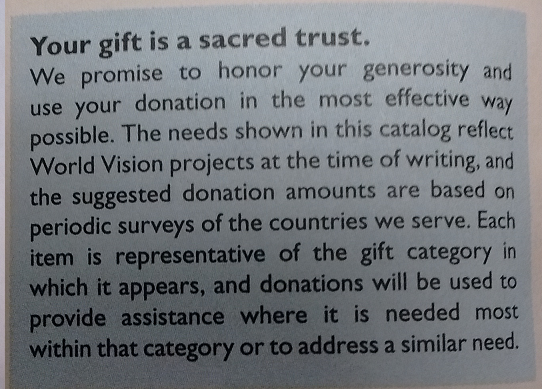 In other words, your donation will be used where “it is needed most.”
Church Illusions
Other illusions I have covered include Mars Hill Church’s promotion of Ethiopian pastors via Mars Hill Global. In fact, most of the money donated to Mars Hill Global went to expand the Mars Hill Church video locations in the United States.
Gospel for Asia for years told donors that 100% of donations went to “the field.” The illusion was created that poor church planters and Asian children were getting most of the donations. However, we have since learned that Gospel for Asia’s Texas leadership sent millions to Believers’ Church in India, also controlled by GFA founder K.P. Yohannan to build state of the art for profit schools and medical centers. While a small percentage of the money went to evangelism and helping the poor, much of it went to projects designed to make Believers’ church self-sustaining and a large portion went to India and then back to Texas to help build GFA’s state of the art headquarters.
Today, I wrote about K-LOVE’s claim that a $40/month donation to K-LOVE provides a warm winter coat to a needy child. The only reason that claim might technically be true is because K-LOVE and Operation Warm set up an artificial scheme to tie coat distributions to pledges. K-LOVE holds captive coats from Operation Warm and tells prospective donors we will give a coat if you pledge. What K-LOVE doesn’t tell donors is that the coat will be given to a child anyway, pledge or no pledge.
Do Donors Want Illusions?
Tim Ogden at the Philanthropy Action blog says they do:

David Roodman pointed me to a typical reaction post to the Kiva story. In summary, the authors lament the lack of direct connection to a specific person they can give to and wonder why they can’t just dispense with the intermediaries.
I think the post is quite revelatory about why so many charities create the illusion of direct connection. They do so because donors demand it.
The demand for direct connection is baffling to me since most donors absolutely refuse direct connection to the people in need that are closest to them. Consider: how often do you or your friends take advantage of the opportunity to give directly and establish a connection by giving $20 to the guy standing at the corner with the cardboard sign saying, “Will Work for Food”?
I’ll bet the answer is “never.“ And there’s a very good reason for that. You believe that to actually help that person you should give the money to a knowledgeable intermediary like a homeless shelter that will do the research to understand this person’s situation, and ensure the money you give is actually used in a responsible way.
So if you would only give to an intermediary in order to help someone on the street outside your home, why do you want to do away with intermediaries between you and a person on the other side of the world whose circumstances you don’t understand at all?
I just don’t get it.
In the end I guess the donor demand really is for an illusion. They don’t just want connection—what they want is the illusion of connection where they can feel directly connected but not actually have to be directly connected—with all the messiness that such connections would entail—to people in need.

This somewhat cynical explanation for the persistence of illusions doesn’t quite fit for me. As I have learned that charities are using subterfuge to raise money, my reaction has been anger. I want the nuance. I want to know what they are doing with the money.
Guilt Illusions
I am sad and angry that K-LOVE artificially creates guilt in their listeners. I know people who agonize over how much to give to K-LOVE “to keep them on the air.” When K-LOVE’s well-paid on-air personalities top off their appeals with the promise that the $40/month will trigger a coat for a needy kid, that tips the scale toward a pledge, even though the family income really can’t absorb that level of giving. It should keep K-LOVE executives up at night that their Christian brothers and sisters are denying their children and themselves basics so that they can get a quarter of a million per year (the CEO made nearly $600,000 in FY 2015).
On this #GivingTuesday, give to those you have investigated. Give locally. By all means, give a needy person a coat, but do it yourself, or through a local group who is locally accountable.