It is my belief that the reason we have such poor giving by our Church is the lack of stewardship in the Church staff. Churches with excellent stewardship see greater giving because people know that every dollar they give will go towards the mission of the Church. It is very clear this has not been the case at Mars Hill Church.
Sutton Turner

On Monday, Mars Hill Church leaders told the congregation that the church is “now facing the most serious budget challenge in our history.” However, according to a 2012 Mars Hill Church memo from Sutton Turner to his fellow executive elders, the church has been operating from crisis to crisis for quite some time.  At the time, he wrote: “we are in a big mess. It is much worse that I could have ever imagined.” Perhaps, this assessment in 2012 provides perspective on the severity of the current “most serious budget challenge” the church history.

Turner’s March 17, 2012 memo outlines his perception of Mars Hill Church as “a very broken and fundamentally financially unsustainable organization.” Turner identifies numerous problems including a culture “that is plagued by poor stewardship, entitlement, December’s Hail Mary strategy, and using of the Church to build a personal ministry.”

Turner delineates reasons for his opinions throughout the memo. For now, I want to focus on two issues, the Result Source campaign and what Turner called the “December hail Mary strategy.”

On the Result Source expense to rig the New York Times count of book sales, Turner notes that the church spent heavily on that campaign along with launching six new locations.

Then you put on top of these 6 churches launches a RM campaign and you basically have a company going to World War III. It is all hands on deck, spend whenever is needed and let’s win the War.

The decision to “spend whatever is needed” is an unexamined aspect of the Real Marriage campaign. Mars Hill Church had finished 2011 strong because of the 2011 “December hail Mary strategy.” Over the next 3 months, the church burned through that money to the point that in March Sutton Turner woke up in the middle of the night and wrote a doomsday memo to his colleagues. Media and communications staff were given the tasks of promoting the Real Marriage book, including scheduling and servicing speaking engagements, all on church time. In the memo, Turner complains about this aspect of Mars Hill culture:

Many times these personal ministries are done during staff time and using church resources. This actually encouraged when I first came on staff as it was explained to me that staff was able to take MHC time to do consulting work to supplement their income. At the very highest levels of the organization this was taking place and reproduced throughout the organization. So as a result, all staff members saw this as acceptable and now the established culture within Mars Hill Church.

There is no higher level of the organization than Mark Driscoll and Sutton Turner had already participated in that culture by signing the contract with Result Source in October 2011 to rig the bestseller lists. On one hand, Turner is correct that ministers should not use the church to benefit them financially, but on the other hand, he had gone along with just such a scheme on a massive scale. At the end of the memo, he returns to the launch of six churches and the Real Marriage campaign as being a prime factor for the hole they were in.

The hole we are in today was set in course when we decided to plant 6 churches in 5 months on top of the Real Marriage campaign. Too much work for an 8,000 in weekly attendance church to undertake when there was a culture within the church staff of poor stewardship and a church body that did not financially support the church.

Another aspect of this memo that really stands out is the admission that the December end-of-the-year giving campaigns were designed to make up for giving shortfalls. Turner wrote:

From what I can tell by this past year’s budget, we have had a strategy of completing a Hail Mary every December with a big giving campaign. This has allowed the negative monthly ﬁnancial performance to continue while we count on a Hail Mary giving push in December to make up for the annual deﬁcit. Givers are giving to grow the body and plant more churches, but given our spending habits, their gifts just help us catch up. With the growth of the church, the 2011 version only allows for enough cash to run through June 2012 and is not a sustainable plan for December 2012.

Even though the church told the congregation that the December offerings were to be over and above tithes in order to fund extra projects, the money was not used in that manner.  Even though Turner complained about this fundraising style, the church maintained the “December hail Mary strategy” during the end of the 2013 with glowing descriptions of a Jesus Festival to be held in August. That idea was discarded without notice very early in 2014.

Closer to the time of Turner’s memo was the 2011 end of the year appeal for $6.4 million for, among other things, the planting of four churches (happened), and to fund an animated children’s series (never happened). However, by March 2012, Turner was sounding the alarm that the church was in serious financial shape. He summarized the predicament with the following image: 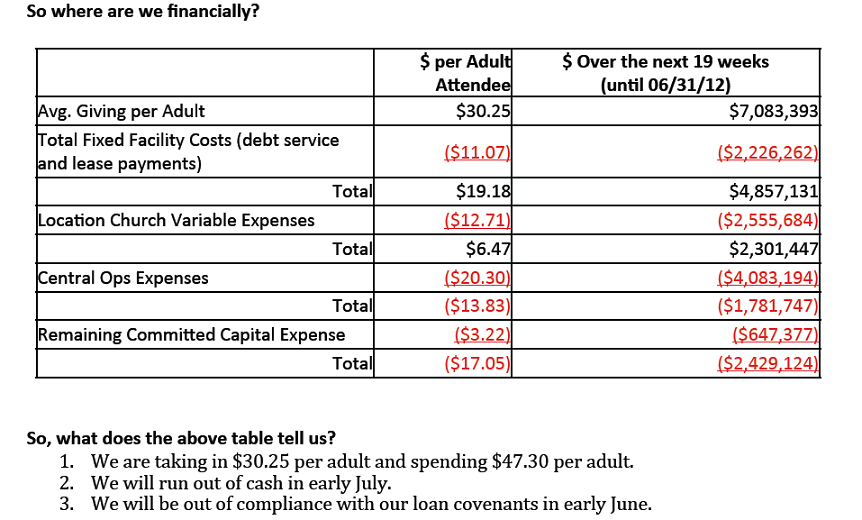 If Mars Hill Church is now in “the most serious budget challenge in our history” then things now must be much worse than anyone has stated publicly. Given the rapid acquisition of properties, Mars Hill could be very low on cash and be in danger of the same kind of problems that existed in 2012. My guess is October is a deadline of sorts along the lines of point #3 above.

My suspicion is that the past is prologue to the current situation. Turner predicted that the situation was unsustainable and it appears he was correct.

I will probably revisit this memo in a future post but for now, let me end where I began. I believe Turner was correct when wrote:

It is my belief that the reason we have such poor giving by our Church is the lack of stewardship in the Church staff. Churches with excellent stewardship see greater giving because people know that every dollar they give will go towards the mission of the Church. It is very clear this has not been the case at Mars Hill Church.

However, very little has changed since he wrote those words. The church has steadfastly refused to disclose Global Fund spending, the church attempted to keep information about the Global Fund hidden, executive personnel costs are closely guarded secrets, and up until recently, members and some elders could not get a look at bylaws. It is still true that “churches with excellent stewardship see greater giving because people know that every dollar they give will go towards the mission of the Church.” Perhaps even Turner would agree that, even in the present season, “this has not been the case at Mars Hill Church.”