As reported here last week, Tate Hausman co-leader of Ohio Obama get out the vote organization, Vote Today Ohio, was convicted of voter fraud. Mr. Hausman violated Ohio laws requiring new residents in the state to intend to remain in Ohio past the election. He had no intention of staying in Ohio.
Mr. Hausman, a Brooklyn, New York resident, spoke to the Brooklyn Paper about the conviction in an interview published today. He says he did not understand the law.

Hausman was hit with a $1,000 fine from a court in the Buckeye State, where he had relocated in order to get out the vote from students, homeless people and other under-represented voters.
Of course, he voted there, too.
That’s where the trouble began.
Hausman cast an early ballot for Obama on Oct. 4, believing he was allowed to do so because he had been living in Columbus for more than the 30-days requirement for voter eligibility.
But Franklin County Ohio Prosecutor Ron O’Brien argued successfully that the rules stipulate that any Ohio voter must intend to remain an Ohio resident — something any self-respecting Brooklynite would never agree to.
Hausman claims he didn’t realize he had broken one of Ohio’s most-sacred tenets until he received a letter outlining the law — but he received it three days after the deadline had passed for withdrawing an illegal vote without punishment.
“When I saw that letter, my stomach fell to my knees,” Hausman said.

This morning Franklin County (OH) Prosecutor Ron O’Brien announced the first in what will be a series of indictments of individuals for voter registration fraud. Here is the new release via Palestra.net 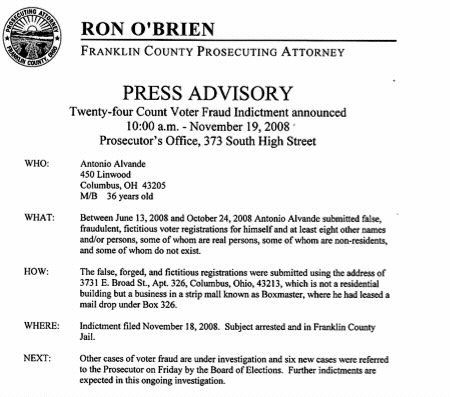 I am wondering if the six cases referred last Friday involve these folks or this woman?