UPDATE: Earlier I titled this post, “Ben Carson Admits Fabrication in Bio.” I have changed the title because Carson now says he didn’t admit a fabrication. Politico has now changed their title to reflect the specific nature of the claims regarding a “full scholarship” to West Point.
I have significantly updated my post to address criticisms in the comments section.
————–
According to Politico, on more than one occasion, Ben Carson claimed he was offered a full scholarship to West Point. Politico has evidence that he was not offered a full scholarship in an official manner and never even sought admission there.
Carson and others are accusing Politico of biased reporting against Carson. According to Politico, Carson told Bill O’Reilly that perhaps he could have been clearer in his descriptions.
I agree. Here is the section from the 2008 book, Gifted Hands. 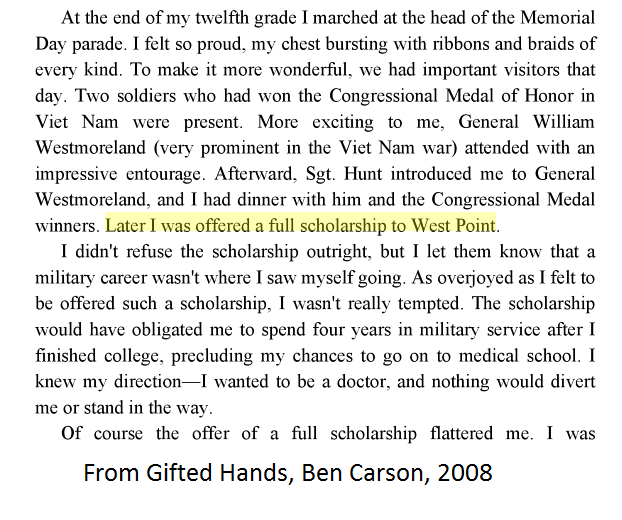 It appears Carson brought together two events (the Memorial Day parade and a later dinner where Medal of Honor winners were present) in his book (see the Politico article for their fact checking on that aspect of the story). Carson says he met with Westmoreland and then “later” was offered a “full scholarship to West Point.” The use of the word “later” makes it seem that West Point actually offered him something. As the story is being told now, Carson was encouraged to apply because his chances of getting in were good. This, however, is not the same as the offer of a full scholarship. To have such an offer, a young person much be recommended and apply. Perhaps Carson didn’t understand the difference between being a good candidate for application and being officially offered a slot at West Point (as his book says).
On analysis, this isn’t as serious as Brian Williams or David Barton. However, I am surprised that Carson didn’t know the difference between being a worthy applicant for West Point and getting an official invitation to attend. It is possible that there was an intent to embellish the story but it is also possible that Carson didn’t understand the difference between informal encouragement and a formal scholarship offer. People who support him will probably lean toward the latter possibility and people who don’t might go for the embellishment narrative.
UPDATE – The Wall Street Journal raises even more questions about Carson’s descriptions of his own history.

Reportedly, he makes $10+million a year so he will be able to be suspended comfortably.
However, that is just the tip of this iceberg. Others are investigating his Katrina coverage (gangs and a dead body floating in the street).
I doubt we’ll see him back at the anchor desk.
Now, when will Christians stop propping up leaders who “misremember” how their court cases turn out and whether or not the Constitution quotes the Bible verbatim?

First Williams turned over his desk to Lester Holt, now he has canceled his appearance on Letterman.
On Friday, President of NBC News Deborah Turness failed to endorse Williams in a memo to staff and announced an investigation. One suspects this isn’t over.
I taught the misinformation effect on Friday and am aware that memories are not tape recordings that can be retrieved with perfection. The “Lost in a Shopping Mall” paradigm illustrates that memories for event that never happened can be suggested and then remembered. However, there has been little explanation about how the event went from being accurately reported at the time to a fabrication of late. It is not at all clear where the misinformation was introduced into the narrative. Whether innocent or not, trust will be an issue for some time to come.
If Brian Williams had the kind of help David Barton has, Williams wouldn’t have anything to worry about.

As I noted here previously, David Barton settled his defamation lawsuit out of court last year. Barton had been accused of being known for appearing at white supremacist rallies by two 2010 candidates for the Texas Board of Education. The Democrat candidates criticized their GOP opponent of relying on Barton who they implied was a white supremacist. Barton and his opponents settled with Barton gaining a financial settlement of an undisclosed amount and an apology. Here is the apology:

During our respective campaigns in 2010 for separate positions on the Texas State Board of Education, we published a video entitled: ”A True Tale From Texas,” that created a false impression about David Barton. The purpose of that video was to discredit our Republican Party political opponents on the State Board of Education, and those on whom they relied, by depicting their position as politically extreme and detrimental to education. Thus, the video stated that David Barton, who advised the State Board of Education, is known for speaking at white supremacist rallies. We believed that statement had been fact-checked by our political consultant, Scott Garrison, who relied for confirmation solely on information provided him from The Texas Freedom Network. As professionals in education and the proper use of language, we understand that this statement suggested that David Barton is a white supremacist, and that the two organizations he is affiliated with, WallBuilder Presentations, Inc. and WallBuilders L.L.C., were associated with or supportive of white supremacists. After learning more about Mr. Barton, we realize this statement was false. We separately and jointly apologize to Mr. Barton for damage to him individually and to his two organizations as a result of that statement.

There is nothing in this apology about Barton’s historical claims or status as an historian. The claim at issue related to white supremacy.
However, as RightWingWatch pointed out last month, Barton told his Wallbuilders’ audience that he had won vindication for his work as an historian so that people who want to use his history can now defend themselves.  Reread the apology above. There is nothing there about Barton’s historical claims.
More recently, at the end of last month, Barton appeared on the Sons of Liberty radio show and said similar things about vindication for his historical claims. Listen:

Host Tim Brown begins by describing the court settlement and asking Barton about the results. Barton tells Brown that the defamation settlement is bad news for the left. At 2:10 into the clip, Barton says:

So after that having gone on for a number of years, we decided to take some folks into court on those two major claims, that we make up our history and it’s all inaccurate and that we’re white supremacists and anti-semitic. And going through the court process, we went all the way to the Texas Supreme Court and came back to District Court, and at that point, the folks settled the case and the court entered a large judgment with a validation of, no the defendants admit that he is not a racist, he’s not anti-semitic, he doesn’t make up his history, and so that’s what we were after was getting some validation that allows us to push back on them when they start telling people  you can’t trust Barton because he makes up all his history. No, you can trust him because here’s the original documents posted on the website.

According to documents posted on Barton supporter Donna Garner’s website, the apology I posted above is what the parties agreed to. There is nothing in that statement of apology about Barton’s historical claims. Now his claims about his claims are suspicious.
I am writing this on the day after NBC News anchor Brian Williams admitted that a story he told about being in a helicopter hit by rocket-propelled grenade fire while in Iraq in 2003 was false. Williams’ future is now the subject of speculation with some journalists calling for him to be removed from his position.
Before its over, Williams might wish he had Mr. Barton’s supporters. Two major Christian organizations, Family Research Council and Focus on the Family have engaged in varying degrees of cover up of Barton’s false historical claims. Other ministers and Christian leaders are also privy to the work of academic historians regarding certain of Barton’s claims, but feature him anyway.