Life Christian University claims to provide earned degrees to “distinguished degree holders” who get PhDs based on their written works and ministry experience. At least some of those people portray them as earned academic degrees. Joyce Meyer is one of those degree holders.

Meyer, who is based in Fenton, MO, refers to the degree as an “earned PhD in theology” (in contrast to two honorary doctorates) on her website (see also here and here): 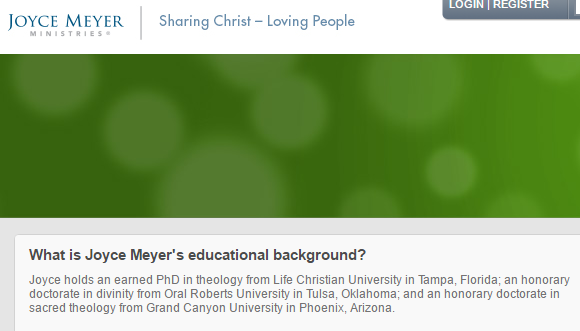 She also recorded a video where she said she was a graduate of LCU. Watch:

Given what LCU says about the degrees on the school website and what founder and president Douglas Wingate said recently in a television interview, Meyer didn’t attend LCU and was given the degree without doing doctoral studies.

In Missouri, it is a class C misdemeanor to use a false or misleading degree. The law states:

A degree is false and misleading if a person claims an earned doctorate but did not complete a program of study. According to Wingate, Meyer and her fellow degree holders didn’t attend LCU but got an “earned PhD” in consideration for their “published works, along with their lifetime ministry achievements.” Meyer implies she earned it and graduated. Since her ministry is her occupation and business, I suspect this law applies to her and the other distinguished degree holders in MO (Billye Brim and Larry Ollison).

The remedy is easy. Just stop referring to the degree as earned. What LCU has done is award honorary degrees and they are allowed to do so, but, in some states, the recipients of those degrees aren’t allowed to deceive the public with them.  Missouri is one of those states.

When I contacted the MO Department of Higher Education, a spokesperson told me that the Department does not have investigative or enforcement authority related to this statute. Instead, she said complaints could be directed to the Attorney General’s office. A spokesperson for the AG’s office confirmed that a consumer complaint begins the process of investigation and enforcement.