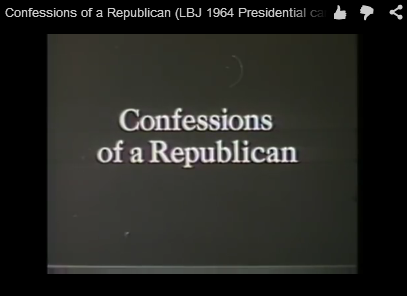 This ad for Lyndon Johnson is uncanny and is making the rounds on social media. I also have included here two other ads that are also deja vu all over again material.
Goldwater lost in a landslide. I hope the GOP doesn’t repeat the past this year. As a lifelong Republican who was a child when Goldwater lost, I don’t recognize the party of my lifetime. My more liberal friends will tell me that I have been in a fog, but I say Ronald Reagan wouldn’t be in the majority among today’s GOP rank and file.
This man scares me. I think my party made a mistake.
[youtube]https://www.youtube.com/watch?v=LiG0AE8zdTU[/youtube]
Which Goldwater (Trump) are you for?
[youtube]https://www.youtube.com/watch?v=DyP_hWvqchU[/youtube]
KKK members endorsed Goldwater. This is also an eerie similarity to Trump today.
[youtube]https://www.youtube.com/watch?v=4hcpedQmOyo[/youtube]

I just finished reading David Barton’s Setting the Record Straight: American History in Black & White. In this book, Barton attempts to demonstrate that the Republican party has historically been the party of civil rights while the Democrats have worked to prevent full equality for African Americans. As with other claims made by Barton, this claim has some truth to it. Democrats, especially southern Democrats worked against Reconstruction era reforms while certain Republicans advocated for full civil rights based on the Declaration of Independence. However, my impression is that Barton skews the history in several ways to give less than a complete and accurate picture of the period of time he covers (from pre-Civil War to the 1960s).

Thus far, I can identify three major problems with Barton’s narrative. One, he fails to make clear the divisions within the Republican party over Reconstruction and civil rights. Throughout the Reconstruction era, moderate and radical Republicans debated how far to go in granting civil rights to freed blacks. However, Barton’s narrative is clearly Democrat versus Republican. Barton mentions Plessy v. Ferguson as an adverse decision for blacks but fails to mention that most of the Justices who decided that case were either Republican or appointed by Republican presidents.

Two, Barton fails to consider the role of the Christian church in the southern resistance to civil rights. The Confederate constitution invoked God and many post Civil War opponents of equality embedded their arguments in the Bible. Barton makes the southern resistance to civil rights for blacks into a political issue without dealing with the religious justifications for segregation.

Three, Barton fails to even mention the 1964 presidential campaign and Barry Goldwater’s vote against the Civil Rights Act as turning points in black voting behavior. Prior to the Goldwater campaign, Republican presidents had received significant support from African Americans. For instance, Eisenhower received 39% of the black vote in 1956 and Nixon got 32% in 1960. In 1964, when Goldwater ran for president, only 6% of the black vote went Republican. Although Franklin Roosevelt and Harry Truman began the change of trend in voting, Goldwater’s lack of support for the Civil Rights Act and the reaction of black leaders — including Martin Luther King — were crucial factors in solidifying black support for the democrats.

This clip summarizes the history nicely:

Note at 4:03 into this clip, Martin Luther King, Jr. urged everyone to vote against Goldwater. Apparently many black leaders did not believe Goldwater was personally racist but the policies adopted by Goldwater and other Republicans at the time were of great importance. Barton completely omits these events.

For a good description of Reconstruction and beyond, I can’t recommend Barton’s book. I am currently reading Concerning a New Republic: The Republican Part and Southern Question, 1869-1900 by Charles Calhoun which is thus far a much better treatment of the facts than Setting the Record Straight. In upcoming posts, I hope to add some depth to these initial observations.