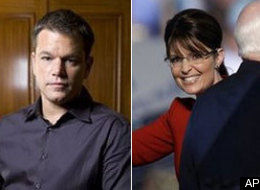 Hollywood, CA (TSN) – In a surprise move, Matt Damon declared his intention to run for President in 2012. Damon, who announced his bid on Youtube, cited Sarah Palin as an inspiration.
“Look, it just makes sense. If Sarah Palin can run for Vice-President, which is like a really bad Disney movie, then why not me running for President? Crap, I’ve actually made some really bad movies, so I’m even more qualified than she is.”
Damon, who is an Obama supporter, said he would only run in 2012 if Obama fails in his bid this time around. Damon explained, “I think I could take him, but Obama is the most qualified in this race to hold the nuclear codes since he doesn’t know when life begins but he probably knows when dinosaurs were on earth. You know, Palin thinks dinosaurs were on earth, like 4,000 years ago. I wouldn’t trust anyone with nuclear codes who thinks that.”
Damon, who has criticized Sarah Palin as being just a hockey mom, said he is infinitely more qualified to stand up to world leaders, like Russia’s Vladimir Putin.
“Hey, I took Sarah Silverman away from Jimmie Kimmel so I figure I can stand up to Putin.”
Damon is willing to use his own resources to fund his campaign, saying, “I would have paid like a million dollars to get Kerry elected in ’04, so who knows how much I’ll spend on myself.”
In an unconventional move, Damon says Arianna Huffington would be on his Veep short list.
On the web: Matt Damon speaks out about Sarah Palin