In late July, I wrote here about an anti-critical race theory conference slated for September 24 in my hometown of Grove City, PA.  After the CRT controversy at my college (Grove City College), this announcement wasn’t good news. What made it worse was the scheduled participation of Lost Cause advocate Jon Harris. As it turns out, Harris will not be able to speak at the conference due to a memorial service for a family member scheduled on the same weekend.

Another change in the good news category is that the conference is now homeless. Last Friday, I was informed by Andy Frey, pastor of First Baptist Church, Grove City, that their church will not host the conference. Early last week, I reached out to Pastor Frey and informed him of the issues raised in the July post as well as some new ones which have come up. He was unaware of that information and took the matter to his deacons. At their regular deacons meeting last Thursday evening, they voted unanimously to pull out of participation.

Above, I mentioned new issues relating to Harris. Not only does Harris think highly of the Confederate South, he also has high regard for another white supremacist regime — Ian Smith’s white rule in Rhodesia. In a Gab posting, Harris waxed nostalgic about whites sticking up for their past against “the barbarian hordes.” 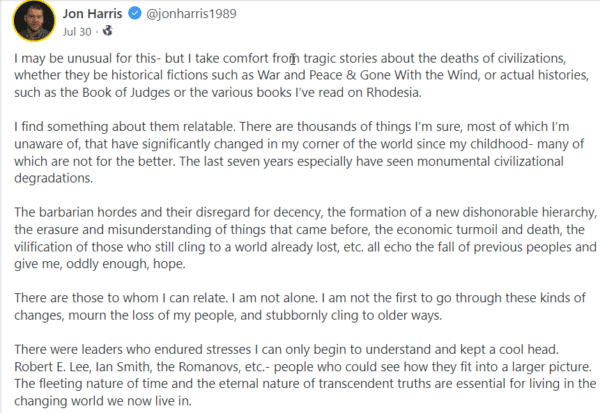 In any case, the CRT conference is homeless for now. Lord willing, it will stay that way.