Although long overdue, the American Psychological Association on October 29 issued an apology to people of color and indigenous people for the role of psychologists, including many leaders of APA, in promoting racism and eugenics thoughout the formative years of the profession. Accompanying the apology is a remarkable historical timeline of events documenting the role of psychologists in promoting white supremacy, racism, and eugenics. Finally, the APA also passed a resolution which calls on psychologists to work toward ending racism.

For the first time, I have been teaching a course in the history of psychology this semester and have covered some of this ground. Especially in considering the role of G. Stanley Hall, Lewis Terman, Paul Popenoe, Robert Yerkes, Henry Goddard and others, one must confront that at least one purpose for which these men did their work was to promote “race betterment” via eugenics policies.

This is the dark side of the history of psychology and we cannot avoid it. I am pleased to see these documents and statements from the current APA leaders. Perhaps, one of the most important immediate benefits will be to confront the same attitudes which seem increasingly common today.

So Who Could Be Against This?

When the statement was released, The Bell Curve author Charles Murray had this response.

You may remember Murray’s policy recommendations from The Bell Curve relating to government assistance to poor people:

“The technically precise description of America’s fertility policy is that it subsidizes births among poor women, who are also disproportionately at the low end of the intelligence distribution. We urge generally that these policies, represented by the extensive network of cash and services for low-income women who have babies, be ended.”

Murray’s advice is a barely sanitized version of a eugenicist’s dream. For instance, Charles Goethe, founder of the California Eugenics Society wrote this letter to the editor in the Sacramento Courier Journal in 1953. 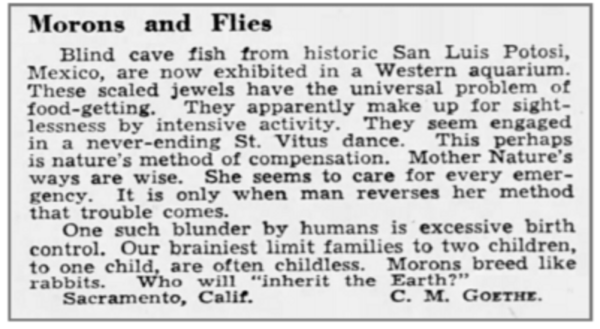 You will be interested to know that your work has played a powerful part in shaping the opinions of the group of intellectuals who are behind Hitler in this epoch-making program. Everywhere I sensed that their opinions have been tremendously stimulated by American thought and particularly by the work of the Human Betterment Foundation. I want you, my dear friend, to carry this thought with you for the rest of your life, that you have really jolted into action a great government of 60 million people.”

This was published in the organization’s newsletter and thus available to psychologist Lewis Terman and marriage counselor Paul Popenoe who were members of the Human Betterment Foundation.

The APA steps forward with regret that psychology in the form of scientific racism and intelligence testing was used to promote sterilization, discrimination and racism, and some people today still object. I say it is about time and their reasonable service.