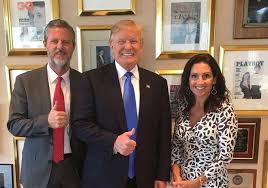 In this seemingly never ending story, Falwell told the WSJ that he did indeed submit his resignation. He doesn’t sound contrite though referring to self-righteous people who put pressure on the board.

In a day full of surprises, Liberty University just issued this press release:

Lynchburg, VA—On the first day of classes of Liberty University’s fall term, Jerry Falwell, Jr., agreed to resign as its President and from its Board of Directors, but following media reports about the resignation, withdrew it.

The Executive Committee’s Board of Trustees asked Falwell to go on indefinite leave of absence on August 7, to which he agreed. Since that time, additional matters came to light that made it clear that it would not be in the best interest of the University for him to return from leave and serve as President. The Executive Committee met this morning and a conference call gathering of the full Board was planned for tomorrow.

Falwell responded by agreeing to resign immediately as President of Liberty University today but then instructed his attorneys to not tender the letter for immediate resignation. The Executive Committee will go forward with its meeting in the morning followed by the full Board.

Acting President Jerry Prevo said, “I call upon the University community and supporters to be in prayer for the University and for all its leadership, past, present and future, as we walk with the Lord through this stormy time of transition.”

Over the past several days, Falwell claimed his wife had a brief affair with Giancarlo Granda, also known as “the pool boy.” Then today, Granda told Reuters that Falwell knew of the affair and seemed to encourage it.

There may be other sordid details, but one loose end has implications beyond Liberty University and the Falwell family. Donald Trump’s former personal lawyer Michael Cohen was involved in helping Jerry Falwell bury racy photos of Falwell’s wife. We now have an idea who might have been the source of those photos. Is it possible that Cohen and Trump used the kompromat on the Falwells to get an early endorsement from him?

The fall out from Falwell’s endorsement cost him a high profile board member in Mark Demoss. It still seems quite surprising that Falwell went all in for Trump not long after he declined to endorse anyone. Given the bizarre twists and turns of this story, I think it is reasonable to wonder if Cohen and this story are related.

To go back where this story started, read Brandon Ambrosino’s article on the real estate deal involving Giancarlo Granda.

For a summary of the Giancarlo Granda connection, see the Miami New Times explainer.