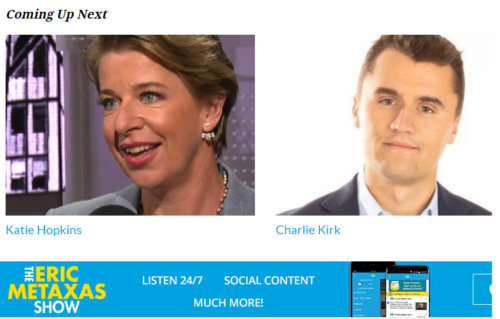 The timing is key.

In the midst of the worst racial unrest in the United States since the late 1960s, Eric Metaxas today hosted white nationalist apologist Katie Hopkins.  Her tweet today is representative of what Metaxas is promoting on his show.

The hashtag and the article she says she stands by are horrendous. And the timing of them is an absolute slap in the face of those seeking racial reconciliation. Metaxas has made a conscious choice to work against this movement in the church by giving Hopkins a platform. The last time she was on his show, he called her his “hero.”

Speaking of the article she stands by, here are some excerpts.

“No, I don’t care. Show me pictures of coffins, show me bodies floating in water, play violins and show me skinny people looking sad.

Because in the next minute you’ll show me pictures of aggressive young men at Calais, spreading like norovirus on a cruise ship. Watching them try to clamber on to British lorries and steal their way into the UK, do I feel pity? Only for the British drivers, who get hit with a fine every time one of this plague of feral humans ends up in their truck.

Make no mistake, these migrants are like cockroaches. They might look a bit ‘Bob Geldof’s Ethiopia circa 1984′, but they are built to survive a nuclear bomb. They are survivors.

Once gunships have driven them back to their shores, boats need to be confiscated and burned on a huge bonfire. Drilling a few holes in the bottom of anything suspiciously resembling a boat would be a good idea, too, just for belt and braces.

The article was removed from publication and eventually Hopkins lost her column gig.

Maybe Metaxas will reveal this on his YouTube channel.

I will shortly be posting a picture of my arse

And apparently, she prefers segregated churches to a call for white Christians to examine their prejudice.

Your churches are empty

White Christians need to stand tall and proud – and #WalkAway from you and everything you represent.

As American Christians are reflecting on the evils of racism and segregation in their churchs, Eric Metaxas today fawns over a woman who says “white Christians need to stand tall and proud” and “walk away” from calls to become allies of our minority brothers and sisters.