As yet another indicator of how far into the alt-right Eric Metaxas has drifted, here is a recent love tweet to British nativist Katie Hopkins.

Sweet @KTHopkins is my hero. What she says is true of Trump voters in America. If elites dislike the results of elections and think they can overturn them by any means necessary, we have the end of republican democracy & self-government & freedom. Please make a note of it. Selah. https://t.co/Kwp2GrRm67

In no universe should Katie Hopkins be called sweet or be anybody’s hero.

She lost her radio show after tweeting that a “final solution” was needed for Muslims. 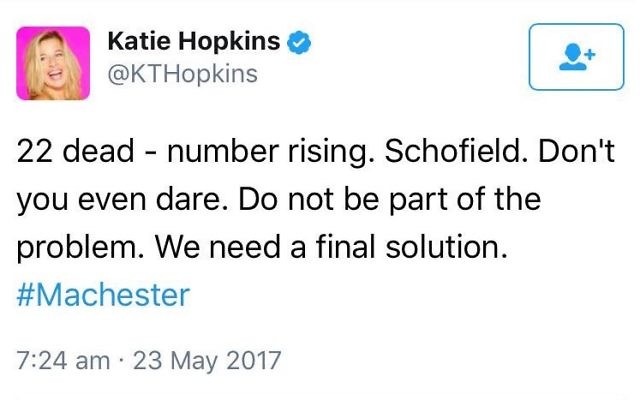 In 2015, she advocated euthanasia for the elderly in nursing homes, telling interviewer Michael Buerk that she would deploy “euthanasia vans” if she ruled the world. According to Metaxas’ hero:

“We just have far too many old people.” Did I know that one in three NHS beds was being blocked by the elderly and demented? A third of our hospitals filled up by people who don’t even know they’re there? She’d soon put a stop to that. “It’s ridiculous to be living in a country where we can put dogs to sleep but not people.” Her solution? “Easy. Euthanasia vans – just like ice-cream vans – that would come to your home.” After they’d finished in the hospitals, presumably. “It would all be perfectly charming. They might even have a nice little tune they’d play. I mean this genuinely. I’m super-keen on euthanasia vans. We need to accept that just because medical advances mean we can live longer, it’s not necessarily the right thing to do.”

She thinks racial profiling is a “good thing,” doesn’t mind being called a racist, promotes the white genocide conspiracy theory, and advocated using gunships to thwart migrants coming into the UK. She called refugees “cockroaches.”

Regarding Metaxas’ tweet, I don’t know what he refers to by removing Trump by “any means necessary.” Numerous people have called for impeachment, but this is a Constitutional means and well within our republican government.

Metaxas’ devotion to Trump has taken him to some dark places when he considers a person like Katie Hopkins “sweet” and a “hero.”