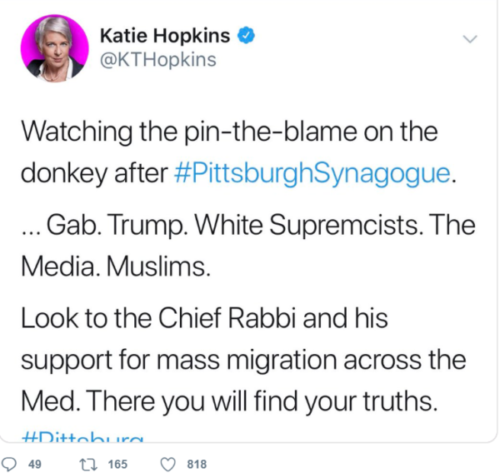 In what may be the greatest mixed message I have ever seen, Donald Trump tweeted that he didn’t approve of a North Carolina crowd chanting “send her back” (referring to Congresswoman Ilhan Omar) by retweeting nativist Katie Hopkins praising the crowd for chanting it.

As you can see, I did nothing to lead people on, nor was I particularly happy with their chant. Just a very big and patriotic crowd. They love the USA! https://t.co/6IVKEffNnq

Trump frequently asks his followers to disbelieve their own eyes. He does nothing to discourage the crowd from chanting the slogan. It is obvious that he didn’t come across negatively since his follower Hopkins revels in the moment and congratulates “Team Trump” on their new slogan.

This is old news by now but I post on it to remind my evangelical readers that Bonhoeffer author Eric Metaxas just loves Katie Hopkins. He had her on his show again and praised her rhetoric as recently as June. Watch:

Hopkins is well known for her quaint ways of promoting bigotry. More recently, she pointed to Jewish leaders for the shooting in Pittsburgh. 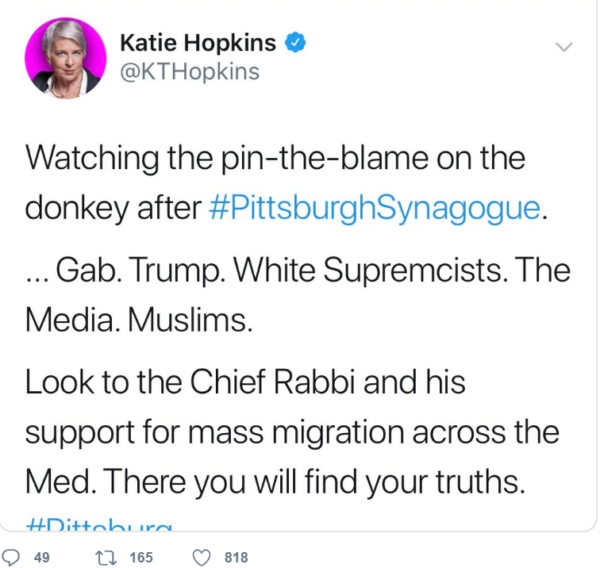 This is ridiculous. This is the person Metaxas told his listeners he wanted to put before them.  I often wonder if Metaxas forgets that his parents were immigrants, but in this segment he acknowledged it. In this segment, Hopkins speaks of immigrants as “them” and about native Brits as “us.” Obviously, Metaxas likes his status as “us.”

In this segment, Hopkins expresses worry that immigrants take away services from older people in the UK. I don’t really think she means it. At least, in the past, she hasn’t cared much for older Brits. Here is what Metaxas’ hero had to say about old people in a 2015 interview:

“We just have far too many old people.” Did I know that one in three NHS beds was being blocked by the elderly and demented? A third of our hospitals filled up by people who don’t even know they’re there? She’d soon put a stop to that. “It’s ridiculous to be living in a country where we can put dogs to sleep but not people.” Her solution? “Easy. Euthanasia vans – just like ice-cream vans – that would come to your home.” After they’d finished in the hospitals, presumably. “It would all be perfectly charming. They might even have a nice little tune they’d play. I mean this genuinely. I’m super-keen on euthanasia vans. We need to accept that just because medical advances mean we can live longer, it’s not necessarily the right thing to do.”

Why didn’t Metaxas ask her about that social program? I feel sure Bonhoeffer would approve, right Eric?