Last night, during K-LOVE’s pledge drive, the on-air personalities played a testimony of a young woman who said she once was at a point where 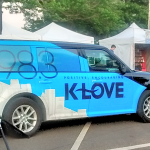 she had enough money to pay a bill or give to K-LOVE, but not both.  She chose to give to K-LOVE and believes God blessed her for it. The on-air personalities then praised the woman for her action of giving to K-LOVE instead of paying a bill.
Maybe I am a downer or lack faith but I think it is irresponsible to encourage people to give to K-LOVE rather than pay their bills.
Perhaps things worked out for that woman but it doesn’t always work out so well for others. And let’s remember K-LOVE isn’t your church. Giving to K-LOVE isn’t “giving to the Lord.” K-LOVE is a radio station which uses Christian music to create numerous well paying jobs.
We live in a country where Christian entertainment is everywhere. There is no shortage of means to hear and see Christian music at little or no cost. In many markets, there are several Christian stations available. Most people on even modest means can afford a music player to load Christian music from a variety of sources.
I am not saying there is no place for Christian radio. I am saying that Christians donors should be discriminating and not lose sight of priorities because of constant begging.
As I have pointed out, K-LOVE is actually a rich organization. Let’s review some basic stats from a previous post on K-LOVE:

Paying one’s bills is an obligation which should be honored unless an emergency comes up. Breaking a promise to pay a bill in order to help fund the inflated payroll of a radio station is obviously absurd when one steps away from the incessant manipulation of the K-LOVE on-air personalities.
K-LOVE was slated to finish their fund drive at about 10pm ET last night. They didn’t make it. But because every executive bonus must be covered, the drive will go on and presumably more donor bills will go unpaid.