This afternoon K-LOVE is still in pledge drive. It is overtime. They didn’t make their goal yesterday as planned so they will keep begging until listeners pledge enough. My question is: how much is enough? In other words, what is the goal of the pledge drive?
K-LOVE’s website posts the percentage of the goal but not the goal. 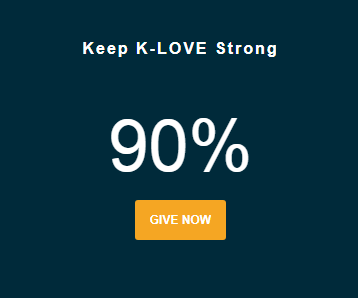 So I called K-LOVE, posted on Facebook and asked on Twitter: How much total are you trying to raise during this pledge drive?
When I called the station, I talked to two people. Neither person knew the goal. Here is the Twitter exchange:

I then asked why the amount could not be disclosed publicly. So far, there has been no answer.

Why Does K-LOVE Need the Pledge Drive?

I suspect the reason is because the amount is quite large. It may also be because it would raise questions about why the pledge drive is needed. Let’s review some key figures from K-LOVE’s 2016 IRS 990 filing:

K-LOVE took in $63-million more than the organization spent in 2016. Does 100% of the pledge goal represent $63-million more than is needed? Given their own giving records, K-LOVE would clearly be fine if their current goal was not completely met. Listeners out there fretting because you fear your station won’t broadcast music if you don’t give should take a hard look at these numbers. K-LOVE does not need your pledge. They want it, but they don’t need it.
It is a huge red flag that K-LOVE won’t disclose the goal for the pledge drive.