If her article at the Washington Post today is any indication, columnist Kirsten Powers is more than a little peeved at my blog host Patheos for taking in Pastor Mark Driscoll as a blogger. In the piece, Powers smartly summarized Driscoll’s history of misogynous utterances and then opined:

Any outlet that promotes him as a respectable teacher is as complicit in our culture’s misogyny as other abusers’ enablers.
But what do I know? I’m just a woman.

As her article shows, Powers knows a lot. But she might not know how much cash one can pull in even with a reputation as a purveyor of toxic masculinity. Stay with me, I am about to show you.

According to the 2014 and 2015 IRS 990 forms required to be filed by nonprofit organizations, Mark Driscoll Ministries pulled in $1,132,009 from November 2014 to December 2016 (figure comes from adding all donations and speaking fees). 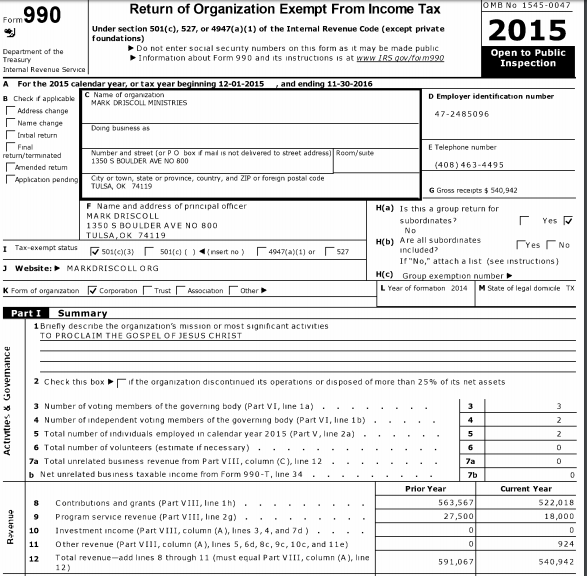 Of course, it takes money to run a “ministries” (why is one guy’s ministry called ministries?) so he didn’t get all of that million, but most of the donations went to his compensation, moving expenses, and housing allowance. His new church got $25,000. I wonder how many donors thought they were helping to plant that church with their donations.
Former Mars Hill Church members: you might be interested to know that much of current content of Mark Driscoll Ministries website was paid for by your charitable giving. Just recently on the Patheos blog, his posts have been recycled from his books and the Resurgence website. Mars Hill funds

paid Docent Research Group and a team of people at Mars Hill to provide the research for the content of the books. These materials have been recycled and keep on giving Driscoll returns on your investment.
So don’t worry about Driscoll. After he resigned from Mars Hill Church rather than comply with his elders’ recommendations in October 2014, his brand seems to have recovered well. Now all he has to worry about is people who remember things and write about them in the Washington Post and of all places Patheos.